EL PASO, Texas (Border Report) – A cadre of businesspeople from both sides of the border gathered in El Paso on Thursday to express support for the U.S.-Mexico-Canada Agreement (USMCA).

The new deal — which would replace a 1994 trilateral free-trade deal (NAFTA) that preceded e-commerce and the rise of China as an economic powerhouse — will create jobs and make North American goods more competitive worldwide, border leaders said.

“We need to pass USMCA — or NAFTA 2.0, as I call it — because it’s important for us on a global perspective to maintain this integrated economy that has been working well between Canada, the United States and Mexico,” said former Florida Gov. Jeb Bush, the featured speaker at Thursday’s U.S.-Mexico Border Summit 2019, which was sponsored by the Borderplex Alliance and other organizations.

Trade between the U.S. and Mexico increased from $150 billion in 1993 to about $750 now, something that wouldn’t have happened without NAFTA, Bush said.

“That trade number would be less than half, investment would have gone to Southeast Asia or China … El Paso would not be as prosperous and there would be a lot more pressure for people (from Mexico) to move into the United States,” he said.

But despite the excitement, the new treaty remains bogged down in Washington, D.C. The Democratic impetus to impeach President Trump and organized labor’s red flags over USMCA failing to protect Mexican workers and keeping wages artificially low have stalled a vote.

U.S. Rep. Will Hurd, R-Texas, said Republicans and business leaders wanted to vote on the treaty before Thanksgiving. Now, they’re hoping Congress can take up the issue before year’s end. 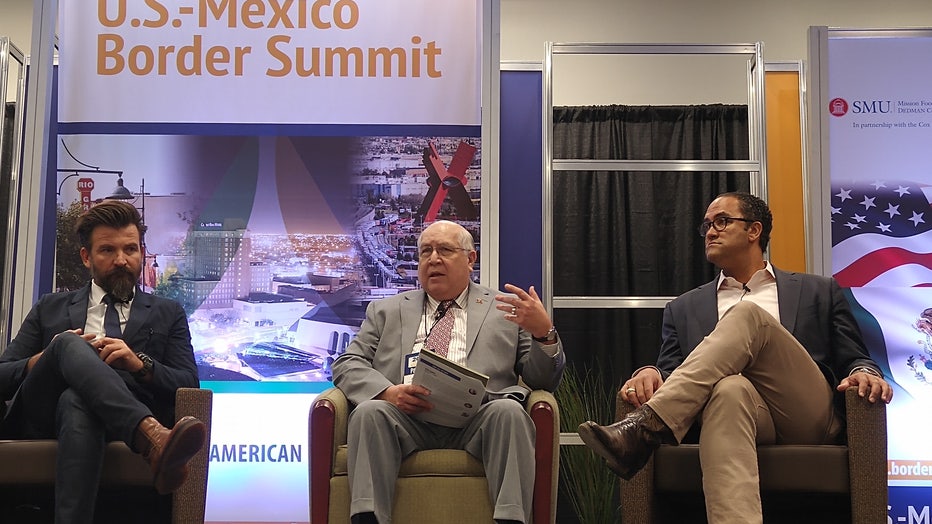 “In 2016, there was debate over whether we should have free trade with Mexico and Canada. We’re not at that point anymore. We know the deal is good. The political hitch is labor … that’s the last area of conversation to move this to the House floor for a vote,” Hurd said.

The lawmaker, who represents a huge chunk of Texas that runs from Far East El Paso to San Antonio, said the treaty is assured of 180 to 190 House votes, but that Democratic votes are needed to reach passage at 218 votes. “It’s up to (House) Speaker (Nancy) Pelosi to deliver that,” he said.

Mexico ‘desperate to get this thing done’

Mexican business leaders present at the summit challenged the notion that the treaty does not protect Mexican workers. Emilio Cadena, CEO of the U.S.-Mexico Foundation, said not only does the treaty provide those protections, but that president Andres Manuel Lopez Obrador got elected with the overwhelming support of blue-collar workers.

“Mexico is desperate to get this thing done,” Cadena said. “We have transitioned from being an oil country to one where the most important economic activity is manufacturing, so it’s extremely important that we have the certainty” that USMCA will be approved.

Hurd said he’s hopeful the agreement will eventually be approved and that American companies will produce more goods for U.S. consumers made in Mexican plants.

“Next election we shouldn’t be talking about trade as something we should agree or not, we should be talking about how to increase North American competitiveness in other parts of the world and how our supply chains can compete with the Chinese,” he said. “We should use the strength of our two neighbors and trying to bring in more countries into the treaty next time.”