MELBOURNE BEACH, Fla. (FOX 13) --  On the sandy shores of Melbourne Beach, many bystanders were surprised and excited to see an endangered sea turtle nesting in the morning hours.

David Rodriguez, a sea turtle research biologist with University of Central Florida Turtle Research Group, was conducting morning patrols Thursday morning. He was in the middle of surveying an empty sea turtle nest when a beachgoer approached him.

"A bystander said there was a leatherback nesting right over there," Rodriguez told FOX 13. "I didn't believe him at first. I look over and saw a large amount of people, and though, 'That's definitely something.'"

His initial disbelief was because seeing sea turtle nesting during the daytime is rare, he explained. But yet, there she was near the Indialantic Boardwalk. 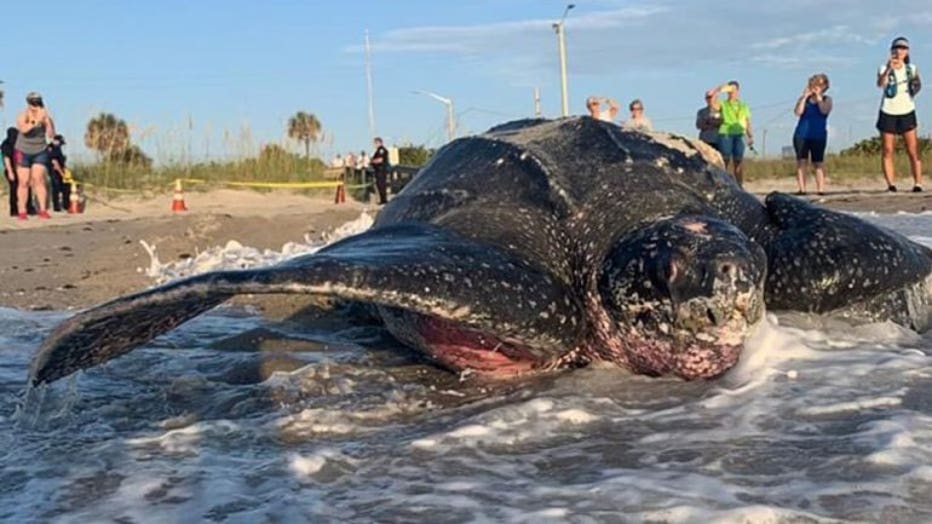 "It was something of an anomaly," Rodriguez said. "You never seen those leatherbacks in the daytime. Even at night it is a chance. It was amazing."

"They usually just come out at night, at least in the Florida beaches when no one was really around and no one can bother them," Rodriguez explained. "The only reason you would see the in the morning is they are nesting late in the night. She was still lingering till the early hours of the morning."

Nearby, Shelley Michel, a photographer, received a phone call about the rare encounter. In a Facebook group called "Brevard is Beautiful," she said she was still in her pajamas when she grabbed her camera and driver's license to head to the beach.

She told FOX 13 it was an unforgettable experience. Her video shows the turtle shifting around in her nest. Three deputies were standing guard to protect the nest.

According to Michel, the turtle returned to the ocean later on, after all the excitement.

"Believe me, it's a sight. She is beautiful," she is heard saying in the video. "I can't believe after years of trying, I finally got to see one."

It turns out, it wasn't the first sighting for this specific leatherback turtle. In fact, she also has a name.

According to Florida Today, the turtle was tagged in March 2016 by Loggerhead Marineline Center while she was nesting in Juno Beach. Her name is Vienna.

Leatherback turtles can reach six feet in length and weigh between 500 to 1,500 pounds, says Florida Fish and Wildlife officials. It's the largest turtle in the world.

Vienna's weight falls in the median. Her age is unknown, Rodriguez said.

As far as the lucky and rare sighting, he said he still can't believe it.