HOUSTON — Barbara Bush was the "first lady of the greatest generation."

Addressing former presidents, ambassadors and hundreds of other mourners inside the nation's largest Episcopal church on Saturday, historian Jon Meacham recalled Barbara Bush's quick wit that made her so popular. He also spoke of her devotion to her husband of 73 years, former President George H.W. Bush, noting he was the "only boy she ever kissed."

Meacham recalled her work bringing awareness to AIDS patients and in promoting literacy. He also said the wife of the 41st president and the mother of the 43rd was "candid and comforting, steadfast and straightforward, honest and loving."

Meacham, who wrote a 2015 biography on George H.W. Bush, joined some 1,500 people on a gray, rainy Saturday to honor Barbara Bush at the private funeral, filling St. Martin's Episcopal Church in Houston a day after more than 6,000 people paid their respects during a public viewing.

George H.W. Bush was helped into the cavernous sanctuary with a wheelchair behind his sons, former President George W. Bush and former Florida Gov. Jeb Bush. He laughed as Meacham and others recalled his wife's wicked sense of humor. 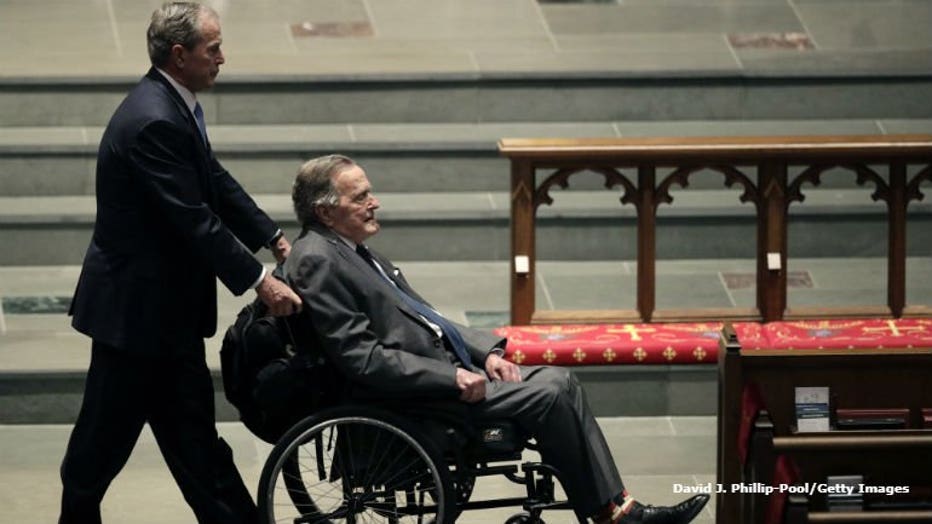 Seated near the front of the church, in the same pew, were two other former presidents — Bill Clinton and Barack Obama — along with their wives and current first lady Melania Trump. 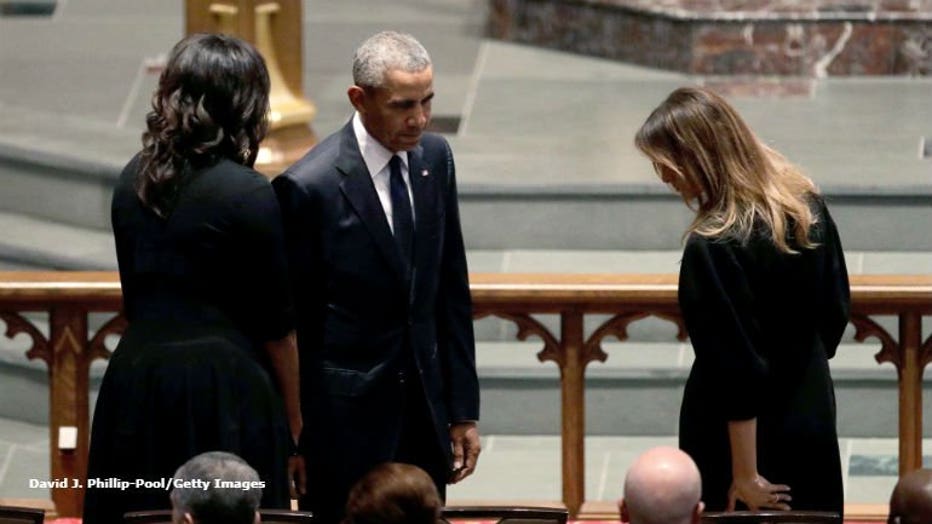 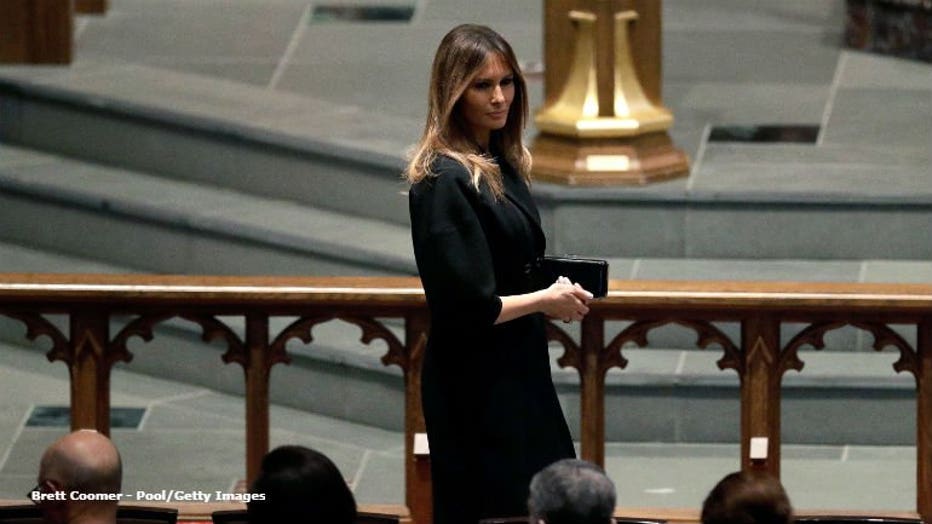 Jeb Bush also delivered a eulogy along with his mother's longtime friend, Susan Baker, wife of former Secretary of State James A. Baker III. Her grandchildren also played prominent roles. Her granddaughters offered readings during the service and her grandsons served as pallbearers.

Barbara Bush died, with her husband by her side, at their home in Houston on Tuesday at age 92.

Flags were flown at half-mast as the service began as the choir sang "My Country Tis of Thee." The church was adorned with sprays of yellow garden roses, yellow snap dragons, antique hydrangeas and other flowers. 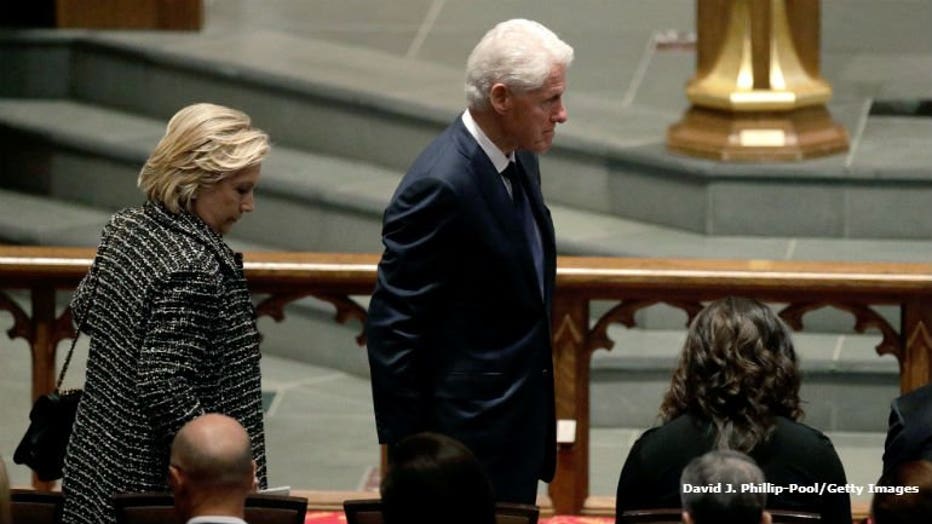 Other guests included former Rep. Gabby Giffords and her husband, retired astronaut Mark Kelly, and professional golfer Phil Mickelson, along with Karl Rove, and other former White House staff. Many were seen embracing in the church before the service.

President Donald Trump isn't attending to avoid security disruptions and "out of respect for the Bush family and friends attending the service," according to the White House. He released a statement Saturday saying his "thoughts and prayers" are "with the entire Bush family."

A burial will follow at the Bush Library at Texas A&M University, about 100 miles (161 kilometers) northwest of Houston. The burial site is in a gated plot surrounded by trees and near a creek where the couple's 3-year-old daughter, Robin, who died of leukemia in 1953, is buried.

On Friday, a total of 6,231 people stopped by the church to pay their respects. Many of the women wore the former first lady's favorite color, blue, and trademark pearls.

After seeing how many people had lined up to pay their respects to his wife, former President George H.W. Bush decided to attend — he sat at the front of the church in a wheelchair, offering his hand and smiled as people shook it, for about 15 minutes. 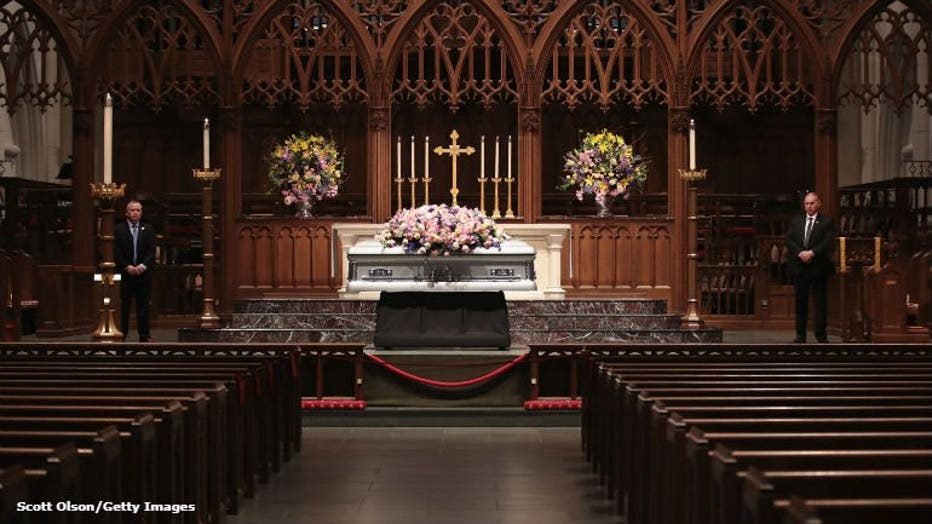 HOUSTON, TX - APRIL 20: Visitation is held for former first lady Barbara Bush at St. Martin's Episcopal Church on April 20, 2018 in Houston, Texas. Bush, who died at her home in Houston on April 17, was the wife of former president George H. W. Bush

Barbara and George Bush were married longer than any other presidential couple when she died Tuesday at their home in Houston. She was 92.

One of just two first ladies to have a child elected president, Barbara Bush was widely admired for her plainspoken style and her advocacy for causes including literacy and AIDS awareness.

Barbara Bush was known as the "Enforcer" in her family, the glue who kept the high-powered clan together. Eight of her grandsons will serve as pallbearers.