While many outlets are publishing Mother’s Day gift lists, none of them mention “bail money”. But enterprising bail bondsmen are trying to cash in on the holiday to promote their services.

A bail bond is a promise by an insurance company to pay the entire amount of someone’s bail if the accused doesn’t show up in court. The insurance company, through a bail bond agency, will charge a premium for posting the bond, often 10%. Bail bond firms can offer payment plans to people with good credit. You can see your credit score and read your credit report for free within minutes with Credit Manager.

Absolute Bail Bonds, a “family owned and operated” business with multiple California locations, under the headline Bring Your Loved One Home to Mom for Mother’s Day, offers the following heart-warming holiday image online suitable for framing: 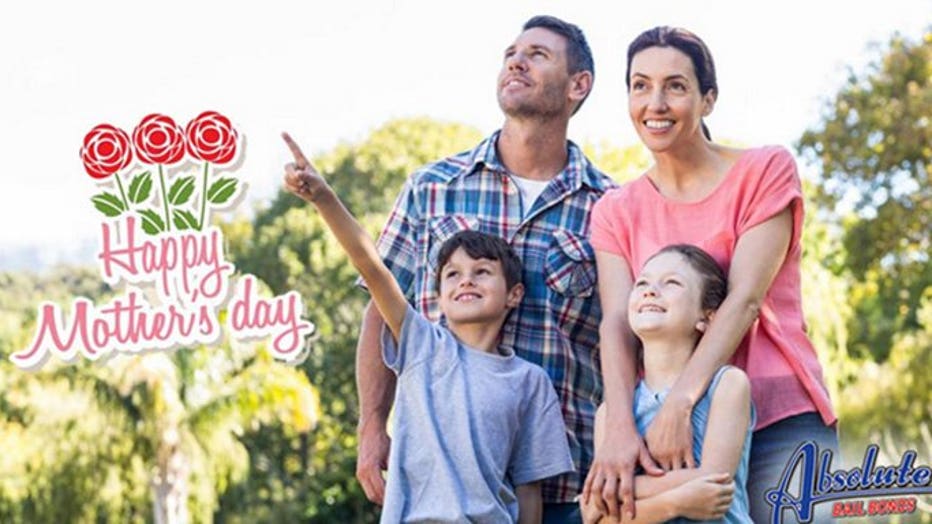 The sales copy under the photo reads: “The ultimate Mother’s Day gift you can ever give to Mom would be the presence of a loved one whom she believes is stuck in jail…. Let us say that it is your brother who is in jail…. Surprise Mom for Mother’s Day and show up with your brother right by your side.”  In the happily reunited family photo above, my guess is the brother is indicating where he got pinched for his lemonade stand Big Wheel drive-by Nerf shooting. Hope Sis didn’t have to sell her puppy to bail him out.

My brothers have never tested my love for them by needing bail (or kept it so quiet I didn’t know). But who would let a brother rot in jail if it weren’t Mother’s Day? “I wasn’t going to bail you out for grand theft, bro, but Mom would miss you too much at her holiday brunch. For payback, can you snatch a pair of diamond earrings I can give to Grandma?”

Other heart-tugging promotions employed by Absolute and other bail bonds websites include:

San Diego Bail Bonds, which is affiliated with Absolute Bail Bonds, realizes that not asking mom herself for bail money could cut into their bottom line. Their promotion, If There Is One Person To Ask For Help From, It’s Mom, includes the line, “Timing now may not be the best right now, with it being Mother’s Day and all, but don’t fret about ruining ‘her day.’”

Another California firm, Absolutely Affordable Bail Bonds, also suggests bail bonds as a Mother’s Day gift idea, but with a twist: “What if Mom is the one in jail?” They so eloquently ask, “What better way to show mom you love her by getting a bail bonds company to help.” I hope I never have to show my mom that kind of love.

The group is focusing on Shelby County where records show nearly 274 women are in jail waiting for trial, according to the station's investigation. Sixty of those women, or nearly one-fourth, are in for misdemeanor crimes, such as driving with a suspended license or truancy.

How We Spend $Billions on Mother’s Day