Bacterial meningitis confirmed in adult Milwaukee resident: “This disease can be very serious”

Bacterial meningitis confirmed in adult Milwaukee resident: "This disease can be very serious"

MILWAUKEE -- The City of Milwaukee Health Department has received a report of a confirmed case of bacterial meningitis (meningococcal disease) in an adult Milwaukee resident. Health officials have identified close contacts to the case (15 people), and has provided appropriate information and medical resources, including the availability of antibiotics, to these individuals. We're told about half of them are taking antibiotics as a precaution.

"This disease can be very serious. The onset of symptoms is very quick. It's very important to get medical treatment," Paul Biedrzycki with the Milwaukee Health Department said.

Meningococcal disease is spread through the exchange of respiratory and throat secretions such as saliva or mucus, and is most commonly spread through direct, close contact with an infected individual, which can include kissing and sharing of beverages, eating utensils, and lip balm. It is not spread by casual contact or by simply breathing the air where a person with meningitis has been.

Symptoms include rapid onset of a fever, headache and stiff neck. Other symptoms can include vomiting, rash, and confusion. Meningococcal disease can result in serious health consequences that require immediate medical attention.

"The constellation of symptoms that are really indicative of meningococcal disease are sudden onset of fever, stiffness of the neck and various joints, sometimes there is severe headaches, disorientation, a sensitivity to light, and a very characteristic red purple rash that typically appears in the trunk or the legs of the individual," Biedrzycki said.

Getting medical treatment right away is very important.

"It has a high case fatality rate. 10 to 20 percent of individuals if not treated early will die from this disease," Biedrzycki said.

Bacterial meningitis can be treated with antibiotics. Antibiotics may be recommended for those in close contact with an infected person to decrease the risk of spreading disease. There are also vaccines available to protect against certain strains of bacterial meningitis. Individuals should consult with their health care provider about their risk for meningococcal disease and eligibility for vaccination.

"The people highest at risk for this disease are people that come into close, intimate contact. This is a disease that`s spread through throat and nose droplets, and secretions such as saliva," Biedrzycki said.

We're told the adult Milwaukee resident who has a confirmed case of bacterial meningitis has been released from the hospital. 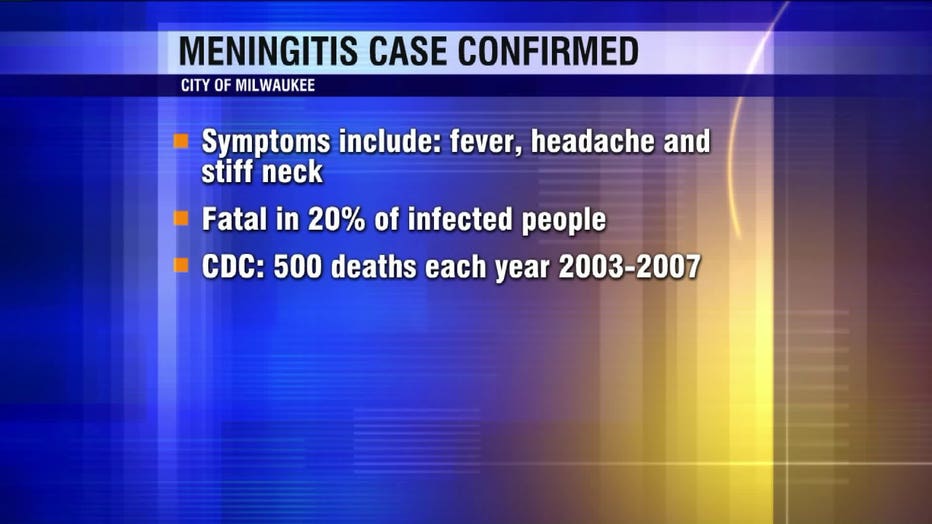 The Milwaukee Health Department says there have been four cases of meningococcal disease in Milwaukee this year.