UNION COUNTY, Ark. – An Arkansas sheriff's office has been accused of putting Nike shirts on inmates for mugshots in a mocking protest of the company's deal with Colin Kaepernick, KTHV reports.

The sheriff's office issued the statement after Shaun King, a civil rights activist, tweeted the following:

"The Sheriff in Union County, Arkansas is putting Nike t-shirts on people they arrest and making them wear them during mugshots. Source says it is to mock Nike and Colin Kaepernick. Disgusting."

Kaepernick, a former 49ers quarterback who received Harvard's W.E.B. Du Bois Medal Thursday, was both applauded and vilified by a divided national audience after he started kneeling during the national anthem in 2016 to protest police brutality and social injustice.

Since then, Nike has named Kaepernick one of the faces of their 30th anniversary "Just Do It" campaign.

After King's tweet went viral, the Union County Sheriff's Office released a statement saying they give the Nike shirts to people who don't have proper attire for a mugshot. The sheriff's department said they had the shirts several months before the Nike Kaepernick ad release, KTHV reports. 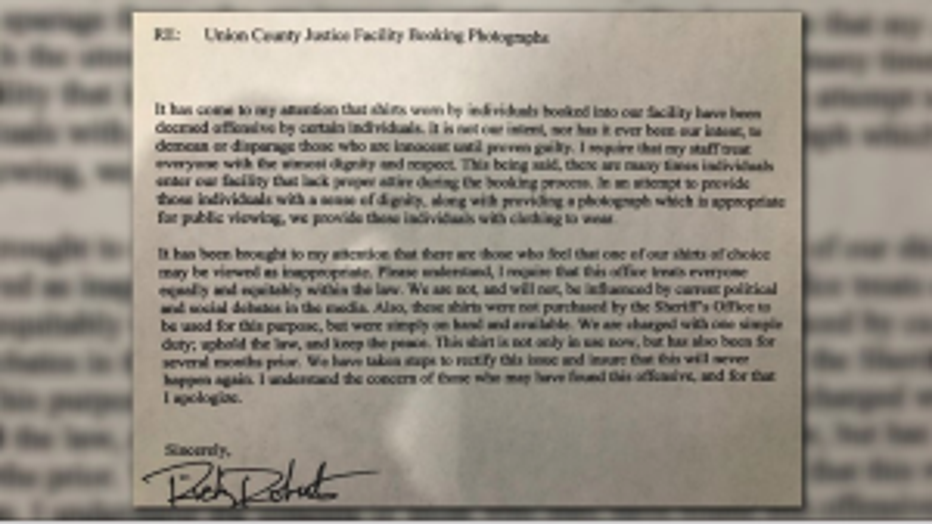 The sheriff's department has reportedly taken down the mug shots of the individuals wearing the Nike shirts.

“It has come to my attention that shirts worn by individuals booked into our facility have been deemed offensive by certain individuals. It is not our intent, nor has it ever been our intent, to demean or disparage those who are innocent until proven guilty. I require that my staff treat everyone with the utmost dignity and respect. This being said, there are many times individuals enter our facility that lack proper attire during the booking process. In an attempt to provide individuals with a sense of dignity, along with providing a photograph which is appropriate for public viewing, we provide these individuals with clothing to wear.

It has been brought to my attention that there are those who feel that one of our shirts of choice may be viewed as inappropriate. Please understand, I require that this office treats everyone equally and equitably within the law. We are not, and will not, be influenced by current political and social debates in the media. Also, these shirts were not purchased by the Sheriff’s Office to be used for this purpose but were simply on hand and available. We are charged with one simply duty; uphold the law and keep the peace. This shirt is not only in use now but has also been for several months prior. We have taken steps to rectify this issue and ensure that this will never happen again. I understand the concern of those who may have found this offensive, and for that, I apologize.