“Are you a doctor?” Former patients accuse optician of doing eye exams without a license

"Are you a doctor?" Former patients accuse optician of doing eye exams without a license

KENOSHA -- They say the eyes are like windows to the soul. Would you trust just anyone to examine your eyes? FOX6 Investigator Bryan Polcyn has a word of caution before you make your next eye appointment.

A local optician is accused of doing eye exams without a license. The first complaint came in 21 years ago. He's still in business today. And when it comes to being a threat to the public, FOX6's investigation finds there may be more here than meets the eye.

Americans spend more than $20 billion a year on contacts and eyeglasses. But before you spend a penny, you need a prescription from a doctor.

"When you go see a doctor, you assume that the person seeing you is a doctor," said Samantha Gerrits, who went to see Lee Hagopian for an eye exam four years ago.

Hagopian is not a doctor. But the state of Wisconsin recently found he was acting like one. And FOX6's investigation has uncovered similar complaints as far back as 1994.

Former patients say Hagopian performed eye exams on them, even though he is not a licensed optometrist and never has been. 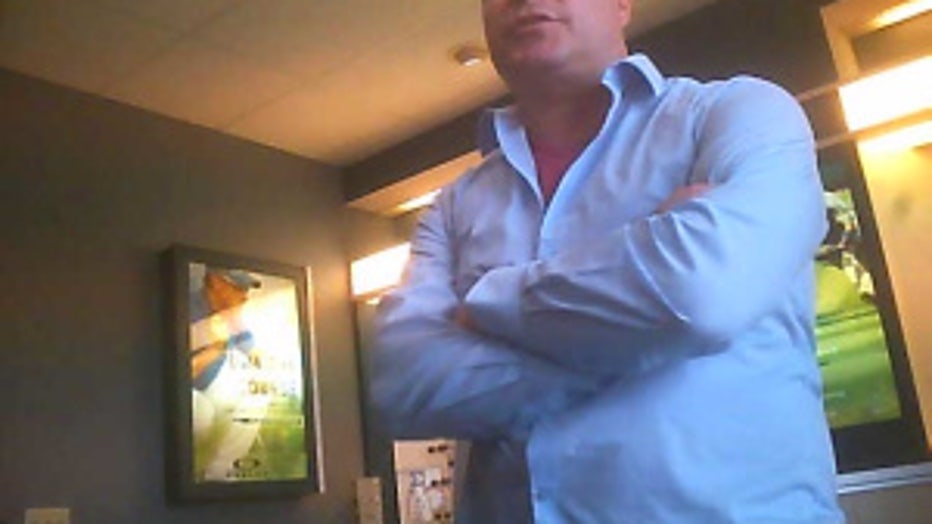 Lee Hagopian is an optician, but he is not a licensed optometrist. Still, several former patients say he conducted eye exams on them without a license.

"He looked in my eyes and said that structurally, my eyes looked good," said Lisa Hawkins, who lives in Salem, Wisconsin, a short distance from one of Hagopian's business locations.

"He wore the lab coat," recalls Gerrits. "He was the only person in there."

"'It was just him in the office," said Shannon Hahn, another former patient. "No one else was there."

When a FOX6 News producer approached Hagopian, he denied it.

"I don't want to talk to anybody when it comes to that," Hagopian said.

Hagopian recently opened a store called Eye Xamz in Kenosha. Before that, he owned Eyes On U Optical in Salem.

"It was very close to my house," Hawkins said.

In January, Hawkins made an appointment for a contact lens exam and says Hagopian greeted her at the door.

"And then he asked me to have a seat in the big chair," Hawkins said.

Hawkins says he did all the usual things eye doctors do.

"Which one looks better, lens one, lens two," Hawkins described. She noticed two licenses hanging on the wall -- one for Dr. Christopher Scott,  and the other for Dr. Robert Mahoney.

"Since he had just done a full exam, I figured he was one of those doctors," Hawkins said.

But when he referred to himself as 'Lee,' Hawkins got suspicious.

"I asked him flat out, 'Are you a doctor?'" Hawkins said.

She says she asked four or five times before he finally answered.

"And he told me yes," Hawkins said. 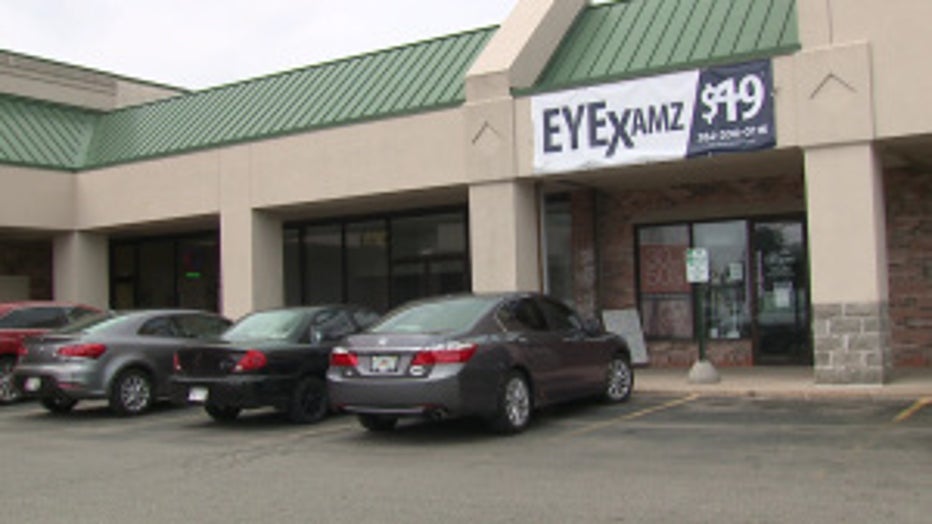 From 2006 through the beginning of 2015, Hagopian owned and operated "Eyes On U Optical" in Salem, Wisconsin. He recently opened a second office in Kenosha under the name "Eye Xams." The Salem location is now also called "Eye Xams."

The next day, she tracked down one of the doctors whose name was on the wall.

"She was really upset that Lee was practicing as a doctor," said Dr. Robert Mahoney, a real, licensed optometrist.

Mahoney says he worked for Hagopian part-time in 2013 and 2014, but only did about 15 exams. He says he had no idea Hagopian was doing exams without him.

"He is implicating me and my license and my livelihood," Mahoney said.

The Kenosha County Sheriff's Department told Hawkins there's nothing they can do. It's not a crime in Wisconsin to impersonate an eye doctor.

So she filed a complaint with the Wisconsin Department of Safety and Professional Services, the agency that oversees optometrists.

Hagopian told a FOX6 producer that he only performed a preliminary test on Lisa Hawkins.

"I put her on the auto refractor just to say, 'hey, what's your prescription?'" Hagopian said.

And he told the state he had Dr. Mahoney's permission to do it.

"He certainly didn't have my permission to do that," Mahoney said.

In letters obtained by FOX6 News, Dr. Mahoney says he now believes Hagopian may have done  "100s of exams" over the years.

Dr. Mark Spankowski says that's a danger to the public. Most optometrists go through four years of undergraduate schooling and another four years of graduate education before they're even eligible to get a state license. 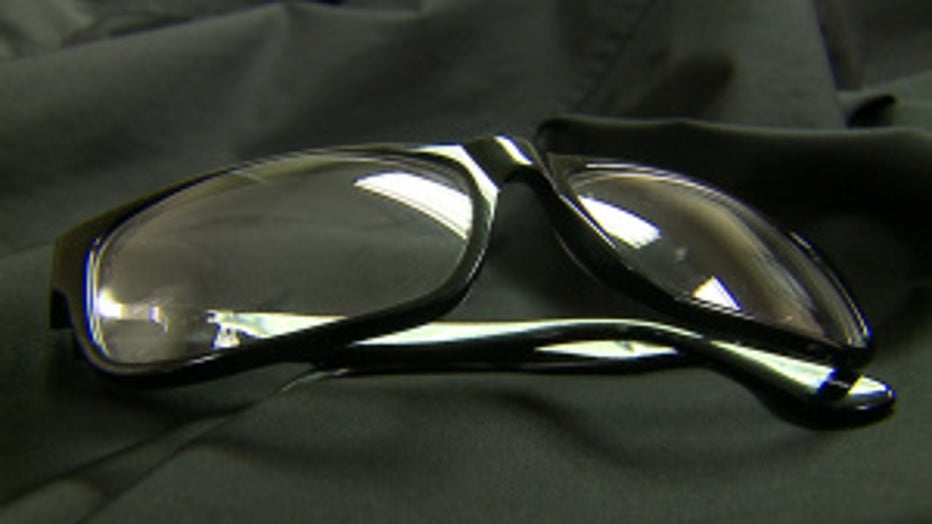 A former employee of Eye Xams tells FOX6 that Hagopian would sell things like "anti-reflective coating" on eyeglasses for an additional cost, then instruct her not to get the coating.

They're specially trained to detect things like tumors, artery blockage, diabetes, even cancer.

Hagopian is optician, which requires no licensing or certification in Wisconsin.

When it comes to Lee Hagopian, FOX6's investigation finds public health is only part of the concern.

Shannon Hahn paid Hagopian nearly $700  for two pairs of glasses -- one for herself, and one for her daughter.

"He said he was putting on, like, an anti-glare that would help in my glasses," Hahn said.

FOX6 News took her glasses to Paramount Optical in Milwaukee for an expert opinion.

"These lenses do not have anti-reflective coating," Jamie Wallack, an optician at Paramount Optical, said.

That's no surprise to Renate Wissmar, who says she worked for Hagopian for a total of four days back in April.

"When we went to go order the lenses with anti-reflection coating, he said 'no!'" Wissmar recalled. "And I said 'what do you mean no?'"

Wissmar says Hagopian would tell customers they were paying for "high definition" lenses. But when it came time to order the actual lenses, she says, he instructed her to get something cheaper.

Bryan Polcyn: "You're saying these patients had been told they're getting HD lenses."

Renate Wissmar/former employee: "Every one of them."

Polcyn: "And they're being charged for HD lenses."

Wissmar: "Every one of them."

Polcyn: "And he told you to order something else."

But customers may not be the only ones getting ripped off.

On March 1st, 2014, Shannon Hahn says Hagopian performed eye exams on her and one of her daughters -- but billed her insurance company for exams and contacts for all five members of her family. 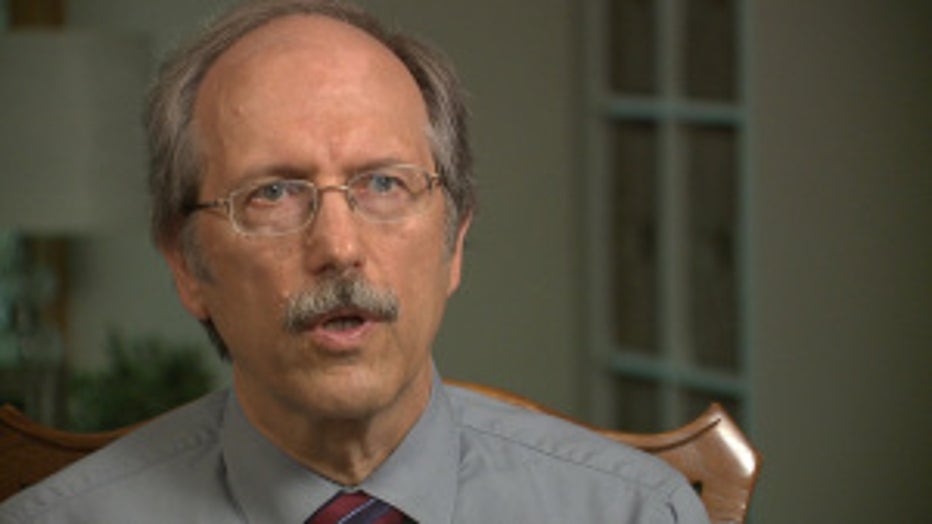 Dr. Robert Mahoney worked part-time for Hagopian in 2013 and 2014. He says he had "no idea" Hagopian was doing exams and submitting insurance claims in his name. He told investigators he believes Hagopian may have done "100s of eye exams" over the ye

Hagopian has never been charged with a crime related to the eye business. And complaints filed in 1994 and 2011 were closed by the state without any action. This year, the state finally issued an injunction that prohibits him from practicing optometry without a license. In other words, they told him, just don't do it again.

"It's a slap on the wrist for something that can do major damage to someone. I think it is ridiculous," Gerrits said.

Hagopian did not return calls for comment. And when FOX6 paid a visit to his Kenosha "Eye Xams" store, he immediately told us to "hit the road" and escorted us out of the building, locking the door behind him.

He's still allowed to sell contacts and eyeglasses. He can even offer eye exams, as long as there's a real doctor doing them.

"I don't think it's appropriate that that's all the State of Wisconsin is willing to do to protect people that are going into him," Hawkins said.

And that's why these woman are coming forward.

"I don't want somebody to go to a 'doctor' and he's not a doctor," Hahn said.