NEW YORK -- After finding the first-known repeating fast radio bursts (FRBs) in February, researchers have discovered another repeating FRB in deep space that has them baffled.

FRB 121102, which has been observed since 2016 by the Lovell Telescope in the U.K., was discovered to have a 157-day repeating pattern. It shows activity for 90 days and then goes silent for 67 days, according to a newly published study in the Monthly Notices of the Royal Astronomical Society. 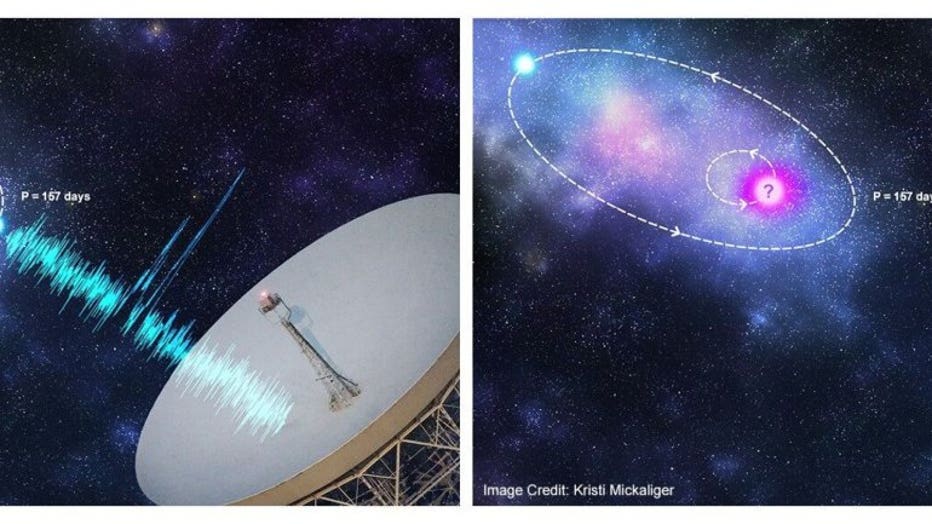 Artist's impression of an orbital modulation model where the FRB progenitor (blue) is in an orbit with a companion astrophysical object (pink). (Credit: Kristi Mickaliger)

It's unclear what's causing the pattern to repeat, leaving researchers to realize just how little they know about FRBs.

“This exciting discovery highlights how little we know about the origin of FRBs,” said one of the study's co-authors, Duncan Lorimer, in a statement. “Further observations of a larger number of FRBs will be needed in order to obtain a clearer picture about these periodic sources and elucidate their origin.”

FRB 180916.J0158+65, which was found to have a 16-day repeating pattern in February, may repeat because it could be orbiting a compact object, for example, a black hole, causing its pattern to repeat, the researchers added in the study. It's also possible that it could be coming from a binary star system, but more research is needed.

FRBs are perhaps the most mysterious anomaly in space, with many having unknown origins.

It's unknown how common FRBs actually are and why some of them repeat and others do not; most of their origins are also mysterious in nature.

Some researchers have speculated they stem from an extraterrestrial civilization. But others, including the Search for Extraterrestrial Intelligence Institute, or SETI, have said that explanation "really doesn't make sense."

They come from all over space "and arranging cooperative alien behavior when even one-way communication takes many billions of years seems unlikely — to put it gently," SETI wrote in a September 2019 blog post.

First discovered in 2007, FRBs are relatively new to astronomers and their origins are mysterious. According to ScienceAlert, some of them can generate as much energy as 500 million suns in a few milliseconds.

In July 2018, an FRB that hit Earth was nearly 200 megahertz lower than any other radio burst ever detected.