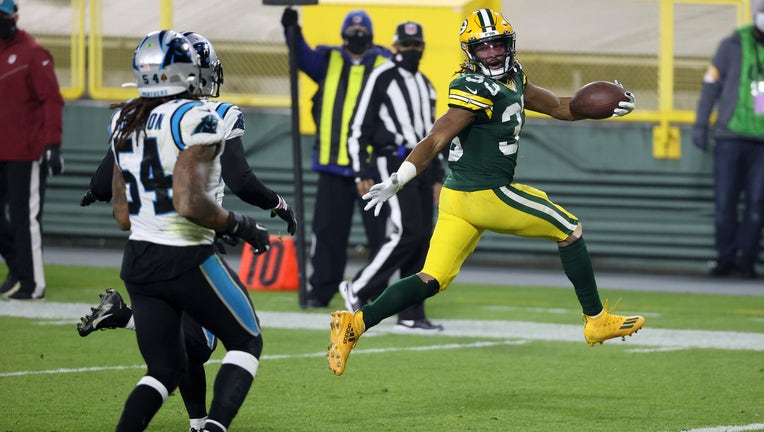 GREEN BAY, WISCONSIN - DECEMBER 19: Running back Aaron Jones #33 of the Green Bay Packers rushes for a touchdown in the second quarter of the game against the Carolina Panthers at Lambeau Field on December 19, 2020 in Green Bay, Wisconsin. (Photo by

Green Bay Packers running back Aaron Jones says he focuses his training all year to make sure he’s in peak form as the season gets older and the weather gets colder.

"I think It’s all about investing into your body," Jones said after rushing for 145 yards and a touchdown in a 24-16 victory over the Carolina Panthers on Saturday night. "It’s what you need to play. You don’t get a second body. You’ve got to be out there and got to be ready to play at all times."

Jones is putting together a second consecutive productive December, which gives the Packers one more reason for confidence as they gear up for the postseason.

With the Packers on pace to earn the No. 1 seed and home-field advantage for the NFC playoffs, they believe they have a collection of running backs who will thrive in cold weather.

The Carolina game showed how the Packers might need to lean more on their rushing attack down the stretch as defenses focus on containing MVP candidate Aaron Rodgers, who threw for a season-low 145 yards against the Panthers.

"I think in the National Football League, especially when you’re talking about December football going into the playoffs, you’ve got to find different ways to win the game," Packers coach Matt LaFleur said Sunday. "And if a defense wants to take something away, they can do that, but you better have another way to continually move the football and score points, and that was our ground game."

Green Bay (11-3) already has clinched the NFC North title and has a one-game lead over New Orleans (10-4) and Seattle (10-4) in the race for the conference’s best overall record.

Jones has rushed for 344 yards in three December games this season, including a 130-yard effort in a 30-16 triumph over Philadelphia on Dec. 6. Last season, he rushed for at least 100 yards in three of the Packers’ last four regular-season games.

He could use a late-season push with his contract set to expire at the end of the season. Jones switched agents and hired Rosenhaus Sports this month as he prepares for his potential free agency.

"I’m a Sagittarius, so I say, yes, December football is definitely, it’s when it’s time to turn it up," Jones said.

The Packers may need to rely on Jones and rookie A.J. Dillon more in these last two regular-season games depending on the status of running back Jamaal Williams, who was knocked out of the Panthers game with a quadriceps injury.

As soon as they selected Dillon out of Boston College in the second round of the 2020 draft, Packers officials talked about how his size and cold-weather background could make him particularly effective in late-season games at Green Bay. Dillon spent over a month on the reserve/COVID-19 list but gained 18 yards on his first carry since Nov. 1.

The Packers haven’t committed any turnovers during their four-game winning streak. The Packers continue doing a nice job of building early leads.

Robert Tonyan has caught a touchdown pass in five straight games. … Krys Barnes made the play of the game by forcing a Teddy Bridgewater fumble when Carolina had first-and-goal at the 1. … Mason Crosby made a 51-yard field goal against Carolina after kicking a 57-yarder a week earlier. He is 16 of 16 on field-goal attempts this season. … Adrian Amos had seven tackles and three passes defended. … Za’Darius Smith recorded a sack to increase his season total to 11½, the NFL’s fourth-highest total.

The offensive line gave up five sacks against Carolina. The Packers had allowed only 14 sacks through their first 13 games of the season.

Williams wasn’t the only Packer to get hurt in Saturday’s game. Barnes suffered an eye injury. Safety Will Redmond was evaluated for a concussion.

40: Aaron Rodgers threw his 40th touchdown pass of the season against Carolina. He’s the first player to throw at least 40 touchdown passes in three separate seasons. He had 45 in 2011 ad 40 in 2016.

The Packers’ Sunday night home game with the Tennessee Titans (10-4) should help prepare them for the playoffs.

The Green Bay Packers got their 11th win of the season -- and fourth straight -- as Aaron Rodgers made NFL history.