WASHINGTON - Amtrak unveiled its "2035 vision" for the future of rail nationwide, which would include at least 30 new routes and adding more daily trips to several existing routes.

The passenger railroad service recently unveiled a map for what an expanded and improved U.S. rail network would look like by 2035 — which would serve 160 new cities. The proposal was shared on the same day President Joe Biden, arguably one of Amtrak’s most famous passengers, announced his sweeping $2.25 trillion plan to rebuild the nation’s infrastructure.

Amtrak notes that many of the country’s large metropolitan areas don’t have rail service at all, including Las Vegas, Phoenix, Nashville, Tennessee and Columbus, Ohio.

Other major cities like Houston, Atlanta and Cincinnati have service that is "simply inadequate," with trains that only stop once a day and often in the middle of the night, the rail service said. 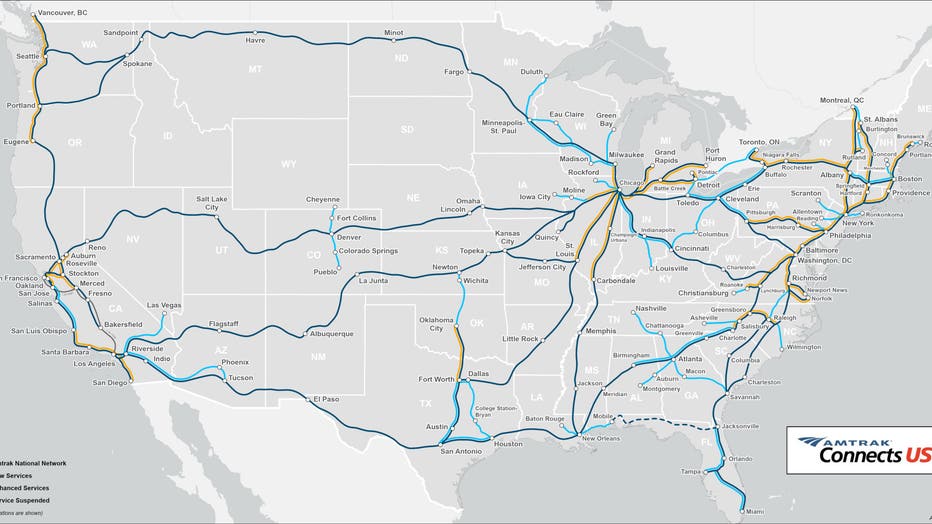 Amtrak’s proposed new routes include one that would connect Savannah, Georgia to Nashville, and stop in Atlanta. In the Carolinas, the plan calls for more frequent trains from Charlotte, North Carolina to Birmingham, Alabama.

In Louisiana, a new line would run from New Orleans to Baton Rouge, Louisiana, while new rail in Texas would connect all of the state’s biggest cities.

New lines stretch in the Midwest between Indianapolis, Indiana to Cincinnati, Columbus and Cleveland, and over to Pittsburgh.

In the West, an added route connects Las Vegas to Southern California, and over to Phoenix and Tucson, Arizona.

"Millions of people, including large populations of people of color, do not have access to a reliable, fast, sustainable, and affordable passenger rail option. This is neither fair nor equitable," Amtrak said in its "Our 2035 Vision" plan.

Biden’s massive infrastructure package includes $85 billion to modernize existing public transit, such as commuter rail and buses. Another $80 billion to address Amtrak’s "repair backlog," as well as improve and expand the country’s passenger and freight network.

"You and your family could travel coast to coast without a single tank of gas onboard a high-speed train," Biden said March 31 during the plan’s unveiling in Pittsburgh.

The infrastructure plan would be largely be funded by an increase in corporate taxes. Many Republican lawmakers have opposed it because of its tax hikes and what they say is an overly broad definition of infrastructure.

In its proposal for the future, Amtrak called on Congress to pass the "significant government funding required" to build and operate the new and improved routes.

"Amtrak must rebuild and improve the Northeast Corridor and our National Network and expand our service to more of America," Amtrak CEO Bill Flynn said in a statement. "The (Northeast Corridor's) many major tunnels and bridges – most of which are over a century old – must be replaced and upgraded to avoid devastating consequences for our transportation network and the country."

Biden famously made the 90-minute commute from his hometown of Wilmington, Delaware to Washington, D.C., throughout his 36 years in the Senate — earning the nickname "Amtrak Joe." The Wilmington Amtrak station is also now named after him.