President Biden reiterated his determination to invest in the $2 trillion American Jobs Plan and $1 trillion American Families Plan — two major pieces of his agenda that are meant to create good-paying jobs, expand economic opportunities for all Americans and help Americans outcompete the rest of the world.

CLEVELAND - Fresh off another new batch of unemployment numbers that saw the United States’ weekly jobless claims reach another pandemic low, President Joe Biden addressed a crowd in Cleveland on the economy.

Thursday’s numbers continued the trend of new pandemic-low unemployment claims every week. Biden stood in the Tri-C’s Manufacturing Technology Center and credited the vaccination effort with creating a path for America’s economy to awaken again.

"To sum it up, COVID cases are down, COVID Deaths are down, unemployment filings are down, hunger is down, vaccinations are up, jobs are up, growth is up, people gaining health coverage is up, small business confidence is up," Biden said. "To put it simply: America is coming back. America is on the move."

RELATED: US unemployment claims fall to 406,000, a new pandemic low

Biden reiterated his determination to invest in the $2 trillion American Jobs Plan and $1 trillion American Families Plan — two major pieces of his agenda that are meant to create good-paying jobs, expand economic opportunities for all Americans and help Americans outcompete the rest of the world.

"Now’s the time to build a foundation that we’ve laid, to make bold investments in our families, our communities, our nation," Biden said. "We know from history that these kinds of investments raise both the floor and the ceiling of an economy for everybody." 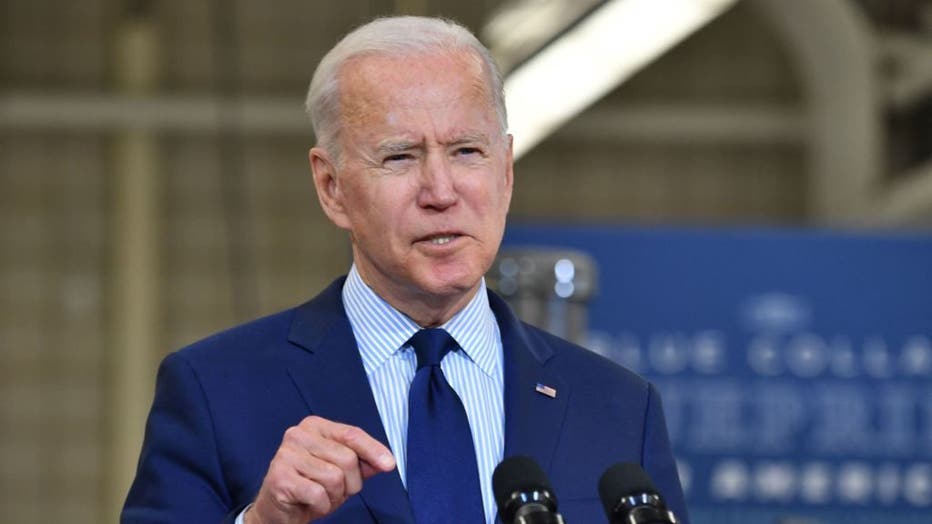 President Joe Biden speaks on the economy at Cuyahoga Community College Manufacturing Technology Center, on May 27, 2021, in Cleveland, Ohio. (Photo by NICHOLAS KAMM/AFP via Getty Images)

Republicans have opposed many of Biden’s economic measures so far, citing employers’ struggles to find workers as the flaw in Biden’s generous $300 weekly bonus checks for the unemployed as part of the American Rescue Plan.

Many Republican-led states pounced on the April report as justification to end their participation in the federal unemployment bonus.

Biden also encouraged unemployed Americans to return to the workplace if a job is available. But he never wavered on his belief that his plan is working.

The American Rescue Plan passed without Republican support, though Biden keeps a list of Republicans who voted against the measure and are now bragging about pieces of it back in their home districts.

"They’ve touted the restaurant revitalization fund. They’ve touted grants to community health care centers. I mean, some people have no shame," Biden said with a chuckle. "But I’m happy they know it benefited their constituents."

But Biden also pleaded Republicans taking credit for what was on his agenda not to obstruct the rest of his wish list.

"The bottom line is this: The Biden economic plan is working," the president said. "We have record job creation. We’re seeing record economic growth. We’re creating a new paradigm."