Daphne Westbrook, the Tennessee teenager who was allegedly kidnapped by her father back in 2019, has been found safe and the Amber Alert has been canceled. But the search continues for her father.

The Tennessee Bureau of Investigation says the now-18-year-old was located in Samson, Alabama, a very small town a few miles north of the Florida border.

"She seems to be OK, no worse for the wear at this point," said Kerry Clewell, special projects investigator for the Hamilton County District Attorney's Office in Tennessee. "This is the first real verification we've had that she's alive and not chained in a basement somewhere."

Prosecutors say Daphne was kidnapped back in October 2019 by her father, 42-year-old John Oliver Westbrook, whom they described as an IT expert specializing in security, block-chain technology, and Bitcoin. Officials believe he had been keeping Daphne drugged or otherwise subdued since he took her.

Investigators ratcheted up efforts to find them after Daphne managed to send a message to a friend back in March to say she was considering self-harm. 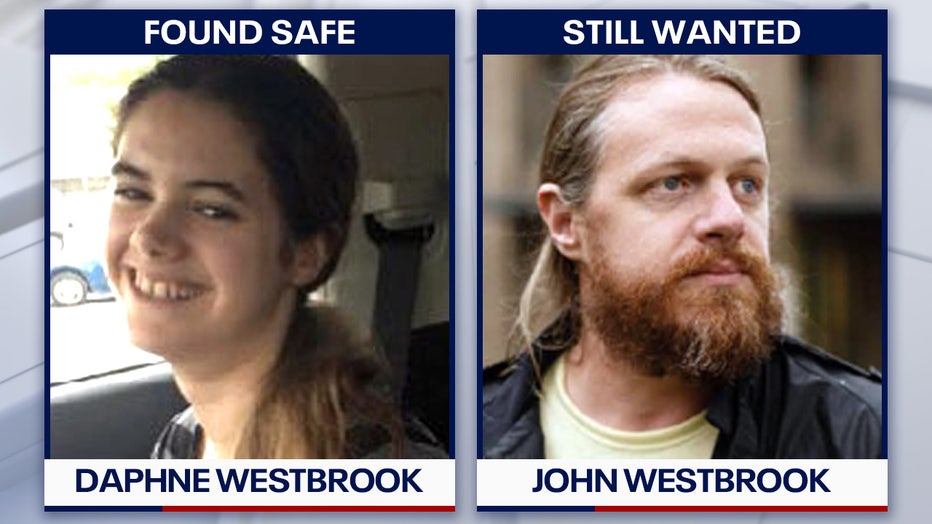 After John Westbrook drove with Daphne in an unknown vehicle throughout the southwestern United States, the district attorney in Tennessee had issued a warning they could be headed to Highlands County, Florida, where Westbrook's sister lives in Sebring.

Investigators say they found communication between Westbrook and the sister, whose home in Sebring was raided in March. Investigators confiscated her electronic devices.

From March: Kidnapped teen's mother pleads for her return

Daphne Westbrook didn't come home from a weekend trip to visit her father, John Westbrook, back in October 2019.

Billboards remained posted across the region, but there were few updates on the case until TBI announced Friday that Daphne had been found driving through Alabama.

Police there initially pulled her over for not having a tag light on her car, Clewell said. Daphne and her dog were the only ones in the vehicle, apparently heading from New Mexico to Panama City Beach.

"She didn't really want to cooperate with us too much," Clewell continued. "I get it, what she's been through, she doesn't know who to trust right now. But I really hope the best for her. Right now she's free and she's not tied down by anyone or anything."

"We are thankful Daphne is safe and no longer being held by her father," the Hamilton County District Attorney's Office wrote on Facebook Friday morning. "It is especially gratifying to be able to tell her mom that Daphne is free and no longer being hidden. This doesn’t change our goal to find and prosecute John Westbrook. Our investigation remains active and we expect new developments within the next couple of weeks."

This story was reported from Tampa, Fla.