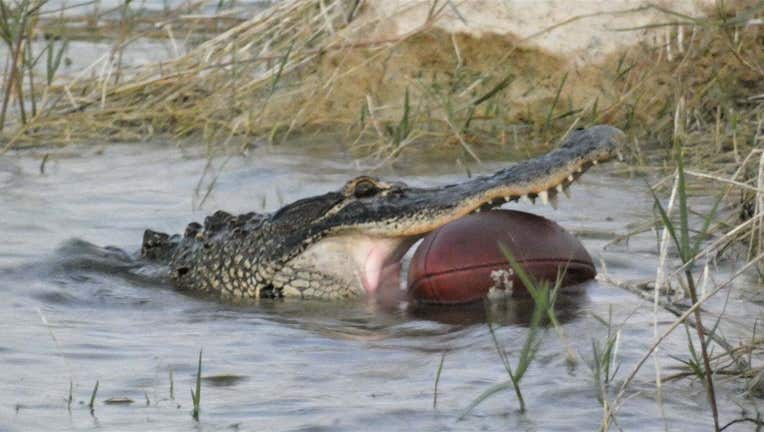 OCHOPEE, Fla. - This is the most ‘Florida’ photo you'll see all day.

An alligator was spotted with a football in its mouth recently at Big Cypress National Preserve in South Florida. Sandra Rayman Harrison posted the photo to the Facebook group Alligators of Florida earlier this month.

The image sparked some debate between viewers on whether the gator was trying to eat it – or practicing its football skills.

"Maybe he wants to play for the Florida Gators," wrote on commenter. "Seriously though, does anyone know how this turned out? It looks like he could chomp that ball."

"He didn’t know it’s a football, thought he scored an easy meal of turtle," said another viewer.

Harrison, a nature enthusiast, told McClatchy News she's worried about the gator's safety, according to the Miami Herald.

"My concern is that somehow the football was wedged in such a way that the gator could not apply pressure to pop it. The concern was also if the ball did pop, would it get lodged and kill the gator?"

Harrison posted the photo hoping someone would know if the gator had been rescued.

Among other visitors to the preserve was Sean Kelley, who posted a photo on January 8 of a gator biting a football. He captioned the photo: "The only gator playing football in January."

He later commented under Harrison's post with a photo of the football covered in bite marks.