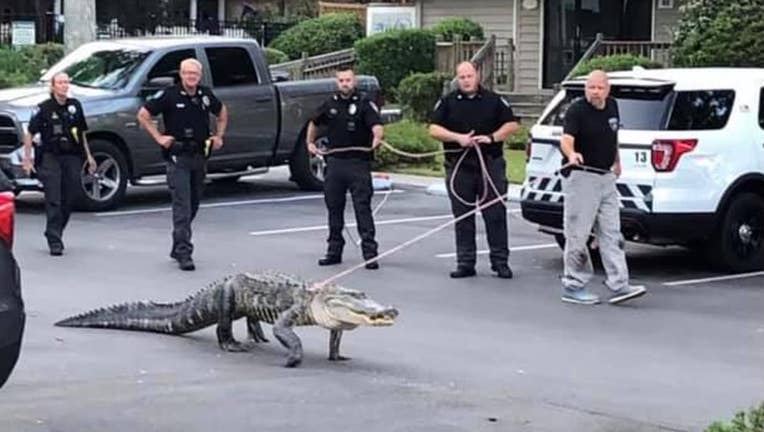 A North Carolina police department posted a picture to social media that shows police officers walking an alligator on a leash. According to the department, the officers were removing the gator from a public pool.

The Sunset Beach Police Department posted the image to its Facebook page. The gator had been spotted near a community pool and had broken into a porch at a nearby reservation office.

In the images, several officers can be seen walking with the gator, albeit at a safe distance. A long leash has been attached to the animal around its neck as well.

The post states, "On Friday October 15, 2021, Officers from the Sunset Beach Police Department were dispatched to Oyster Bay Drive for complaints of a 9-foot alligator walking through the neighborhood. The alligator had also attempted entry into the community pool area. When officers arrived, the alligator had broken through porch lattice at the reservation office. Out of concern for the safety of property owners and neighborhood residents, the gator was relocated to a nearby pond."

This is just the latest photo involving police officers and alligators.

Fox News previously reported that the Palm Bay Police Department shared a photo to its Twitter page in September that shows an officer taking a selfie with the gator. Normally, this would not be safe, but the gator had apparently become stuck in a storm drain.

In the photo, an officer can be seen standing a safe distance away from the animal, whose face is sticking out of the storm drain. It appears that the gator’s back or tail had become stuck.