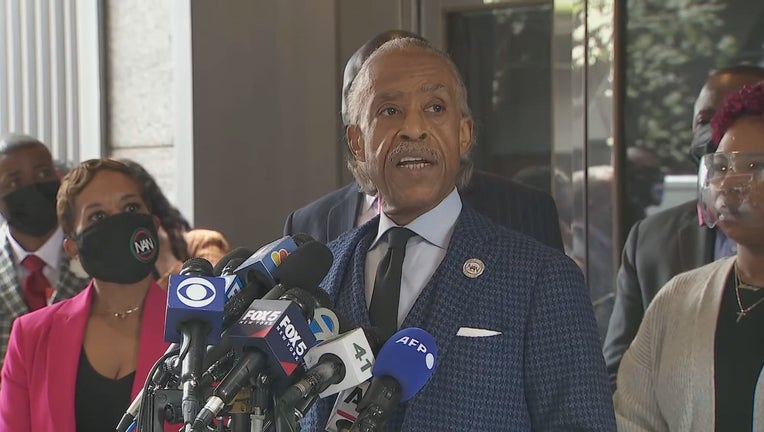 Rev. Al Sharpton talks about preparing funeral arrangements for Daunte Wright, who was shot and killed by police in Brooklyn Center, Minnesota.

(FOX 9) - Civil rights leader Rev. Al Sharpton's organization, the National Action Network, will cover the funeral costs for Daunte Wright, who was shot and killed by a police officer at a traffic stop in Brooklyn Center.

Sharpton made the announcement at a press conference alongside Ben Crump, the attorney representing the Wright family. Sharpton said Crump will be working with the Wright family on Wednesday to make funeral plans.

"We do this because this is what we do. Somebody needs to stand with these victims because they didn't plan to be victims," said Sharpton.

Crump, who is also representing George Floyd's family, said Sharpton will also be providing a eulogy at the service for Wright.

"We're preparing not only to go back to Minneapolis for the remainder of the Chauvin trial to receive the jury's verdict, we now have another task at hand that we ask for prayer," said Crump. "And that is to pray for the family of Daunte Wright as we get ready to give him a respectable home for a service, where Rev. Al will deliver the eulogy. And despite how they're going to attempt to assassinate his character, we're going up there to celebrate his life."

Mothers who have lost their sons to police violence also spoke, voicing their support and condolences for the Wright family.

"An arrest is just step one," said Sybrina Fulton, the mother of Trayvon Martin, who was shot by the neighborhood watch coordinator in 2011. "We all had arrests and anybody can be arrested, but we have to get a conviction and you can’t give up on that."