LOS ANGELES — Aftershocks from Southern California's largest earthquake in 20 years rumbled beneath the Mojave Desert on Friday as authorities tallied damage in the sparsely populated region.

The strongest aftershock thus far hit shortly after 4 a.m., registering magnitude 5.4 and awakening people all the way to the coast.

Thursday's 6.4 magnitude quake struck at midmorning about 150 miles (240 kilometers) northeast of Los Angeles, near the town of Ridgecrest and a sprawling Navy installation. 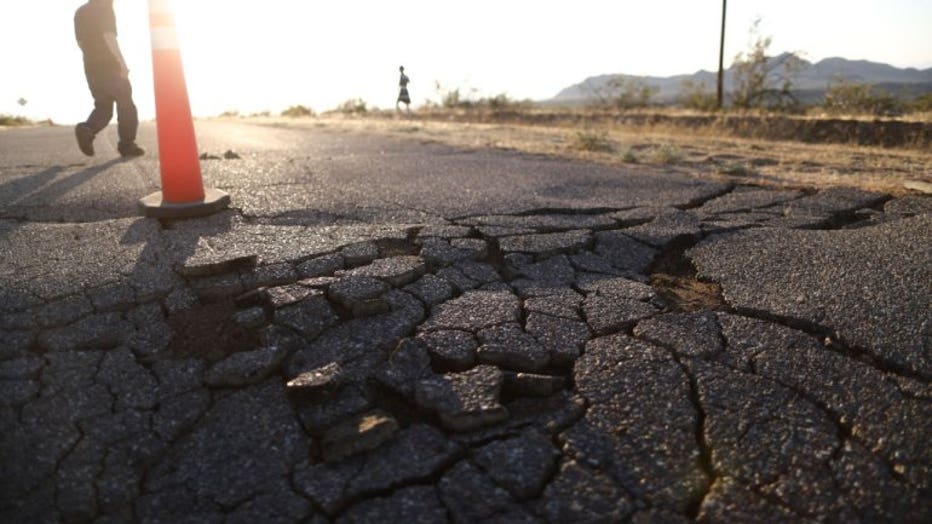 RIDGECREST, CALIFORNIA - JULY 04: People walk near cracks in the road after a 6.4 magnitude earthquake struck the area on July 4, 2019 near Ridgecrest, California. The earthquake was the largest to strike Southern California in 20 years with the epic

He said 15 patients were evacuated from the Ridgecrest Regional Hospital as a precaution.

Naval Air Weapons Station China Lake said in a statement late Thursday that no injuries were reported and so far all buildings had been found to be intact but assessments were continuing across its 1,875 square miles (4,856 square kilometers). Its workforce was ordered to not report on Friday.

A Ridgecrest senior center was holding a July 4th event when the big quake hit and everyone made it out shaken up but without injuries, she said.

"Oh, my goodness, there's another one (quake) right now," Breeden said on live television as an aftershock struck.

Gov. Gavin Newsom declared a state of emergency for Kern County. The declaration means that the state will help the county and municipalities in it with emergency aid and recovery efforts.

Breeden noted at a news conference that other nearby governments have offered to help the recovery effort.

President Donald Trump said he was fully briefed on the earthquake and that it "all seems to be very much under control!" 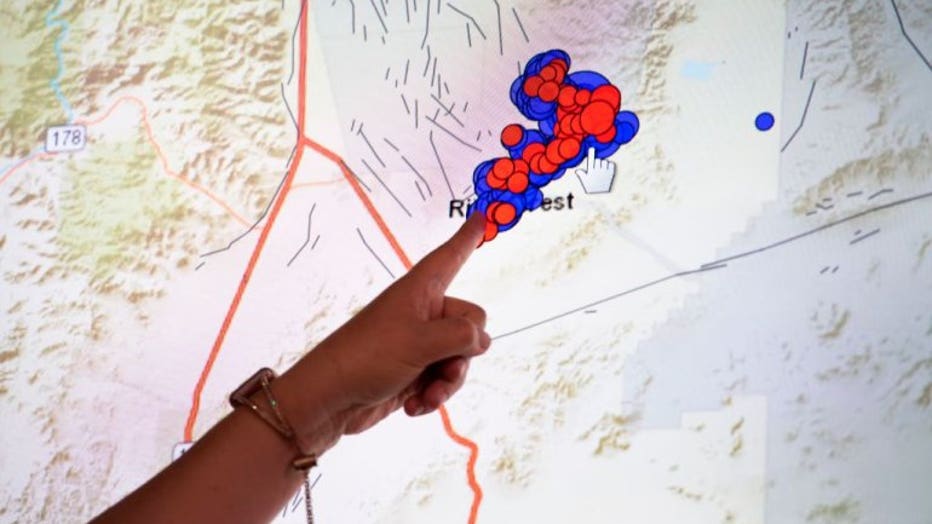 "It almost gave me a heart attack," said Cora Burke, a waitress at Midway Cafe in Ridgecrest, of the big jolt. "It's just a rolling feeling inside the building, inside the cafe and all of a sudden everything started falling off the shelf, glasses, the refrigerator and everything in the small refrigerator fell over."

Video posted online of a liquor store in Ridgecrest showed the aisles filled with broken wine and liquor bottles, knocked down boxes and other groceries strewn on the floor. Flames were seen shooting out of one home in the community.

Lucy Jones, a seismologist with the California Institute of Technology's seismology lab, said the earthquake was the strongest since a 7.1 quake struck another area of the Mojave Desert on October 16, 1999.

"This has been an extremely quiet abnormal time," Jones said. "This type of earthquake is much more normal ... The long term average is probably once every five or 10 years somewhere in Southern California."

Jones said that the 6.4 quake was preceded by a magnitude 4.2 temblor about a half hour earlier.

"This is an isolated enough location that that's going to greatly reduce the damage," she said.

There was little likelihood the quake raised the risk of a quake on the mighty San Andreas Fault, the sleeping giant that runs through much of California and is expected to be the source of the feared "Big One," the scientists said.

"We have never seen a foreshock more than 10 kilometers, 6 miles, away from its mainshock and this is substantially farther than that to the San Andreas," Jones said.

The quake was detected by California's new ShakeAlert system and it provided 48 seconds of warning to the seismology lab well before the shaking arrived at Caltech in the Los Angeles suburb of Pasadena but it did not trigger a public warning through an app recently made available in Los Angeles County.

USGS seismologist Robert Graves said the ShakeAlert system worked properly. He said it calculated an intensity level for the Los Angeles area that was below the threshold for a public alert. The limits are intended to avoid false alarms.