OHIO -- In February 2018, a blowout at a natural gas well in rural Ohio forced nearby residents to evacuate, but the incident received little national attention at the time.

A new analysis of satellite data shows that the leak was far more significant than previously thought.

In just 20 days, the damaged well platform spewed an estimated 60 kilotons of the potent planet-warming gas methane into the atmosphere, scientists say.

That's more methane than European countries like France, Spain and Norway release in a year. 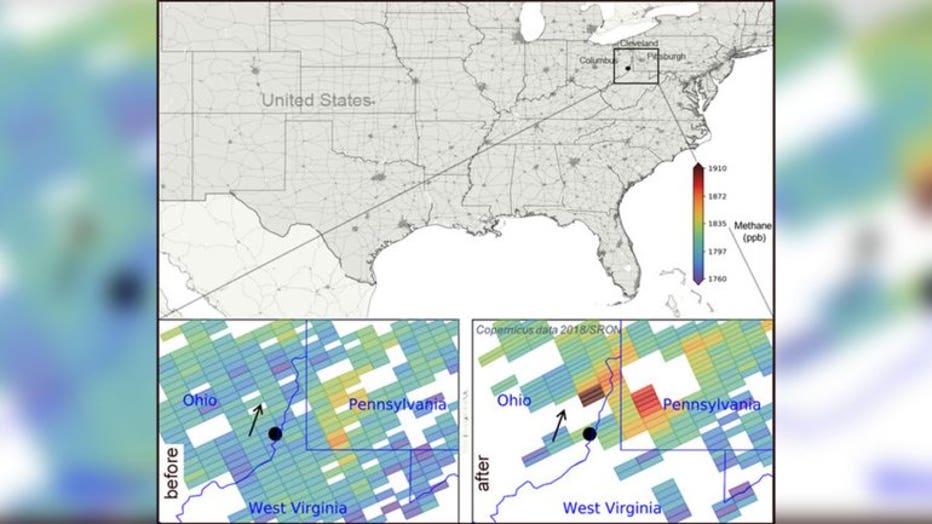 It appears the peak emission rate was twice as great as the second-largest leak ever measured in the United States, the scientists say.

The discovery was published Monday in the Proceedings of the National Academy of Sciences and was made by a group of Dutch and American scientists, who used new satellite technology to detect and measure the size of the leak during a routine global survey.

"The current warming that we are experiencing, one-quarter of it is caused by anthropogenic methane, the additional methane caused by human activity," said Steven Hamburg, chief scientist at the Environmental Defense Fund and a study co-author.

Methane, a primary component of natural gas, has a global warming potential 20 times that of CO2, but methane molecules have a much shorter lifespan in the atmosphere -- about 10 years.

Exxon, which owned the well, said it deeply regretted the incident

The energy giant said it had "instituted systematic well-design and monitoring procedures to prevent it from happening again. We are eager to learn more, and our scientists are currently reviewing the study.

"ExxonMobil is committed to methane reductions and is working with government laboratories, universities and others to identify the most cost-effective and best performing technology, including satellites, that can be adopted by all producers to detect, repair and accurately measure methane."

Hamburg said the real significance of the paper is that it demonstrates the ability to take routine satellite measurements and see events not normally seen. He called it the "beginning of a revolution." Scientists will be able to highlight the quantities of methane release, show more where they're occurring and how they change in time

"And that really allows us to focus on mitigation and assessing the degree to which people are reducing those emissions," he said.

CNN affiliate WTOV reported in 2018 that there was an explosion and fire at a well pad in Belmont County. The fire prompted officials to order people to leave a 1-mile evacuation area.

According to the Energy Information Administration there are 991,000 oil and natural gas wells in the United States.