Satellite images taken in the days after the terrorist attacks on Sept. 11, 2001 reveal the sobering impact on all three sites as the country prepares to mark the 20th anniversary of a day that changed America.

On that Tuesday morning in 2001, two planes hijacked by al-Qaida terrorists crashed into the twin towers in New York City. Another plane hit the Pentagon in Washington, D.C., and passengers on a fourth plane forced it to crash into a field in Shanksville, Pennsylvania.

Nearly 3,000 people died in the attacks, and the images from that day remain forever seared into the minds of many Americans.

RELATED: Never forget: A timeline of the events of September 11, 2001

Maxar said that shortly after the attacks, their team "shifted the tasking" of the IOKONOS satellite in order to "image the affected sites as quickly as possible." The company said it had "the only high-resolution commercial imagery system in orbit" at the time.

The first image, showing what was left at the World Trade Center site, was captured on Sept. 12. It shows smoke rising above Ground Zero, where the twin towers had collapsed just a day before. Another image was taken on Sept. 15 and shows the destruction more clearly when most of the smoke had cleared. 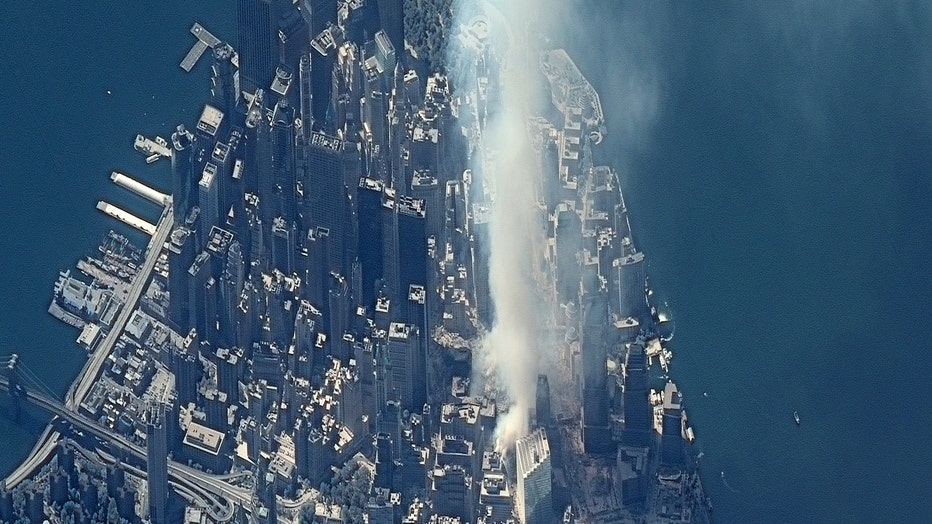 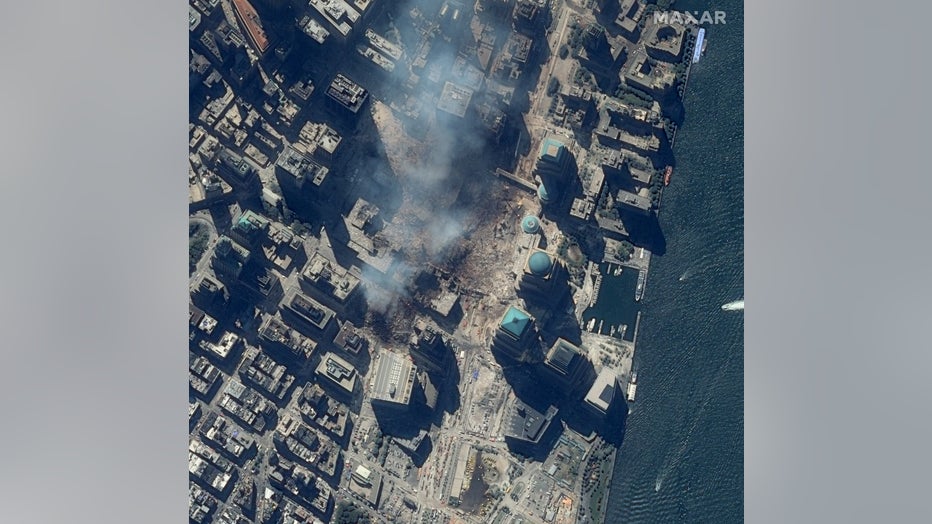 The destruction at ground zero can be seen in this IKONOS image from Sept. 15, 2001. Credit: Maxar Technologies via Storyful

A satellite image captured on Sept. 13 shows the site of the United Airlines flight 93 crash in the Pennsylvania field. The passengers on board had learned from phone calls about the other plane crashes and fought back against the hijackers, attempting to retake control of the plane. It eventually crashed into the field and a national memorial now stands at the site. 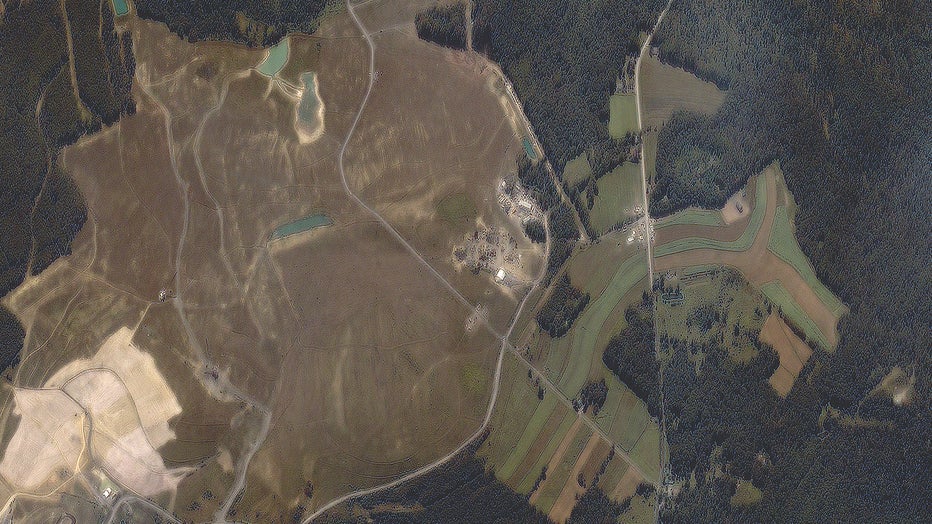 The IKONOS satellite passed over Shanksville, Pennsylvania, on Sept. 13, 2001, showing the site of the United Airlines Flight 93 crash. Credit: Maxar Technologies via Storyful 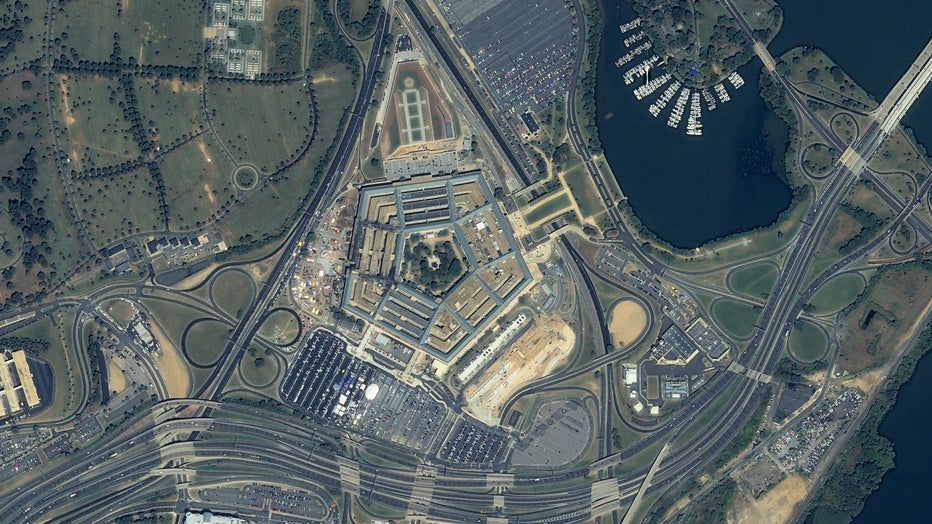 The Pentagon in Arlington, Virginia, is seen from space on Sept. 15, 2001. The impacted area can be seen on the left side of the building. Credit: Maxar Technologies via Storyful

More recent images taken in 2019 and 2021 show One World Trade Center, the main building of the rebuilt World Trade Center complex in lower Manhattan, and the memorial sites, as well as the Pentagon and the Pennsylvania field. 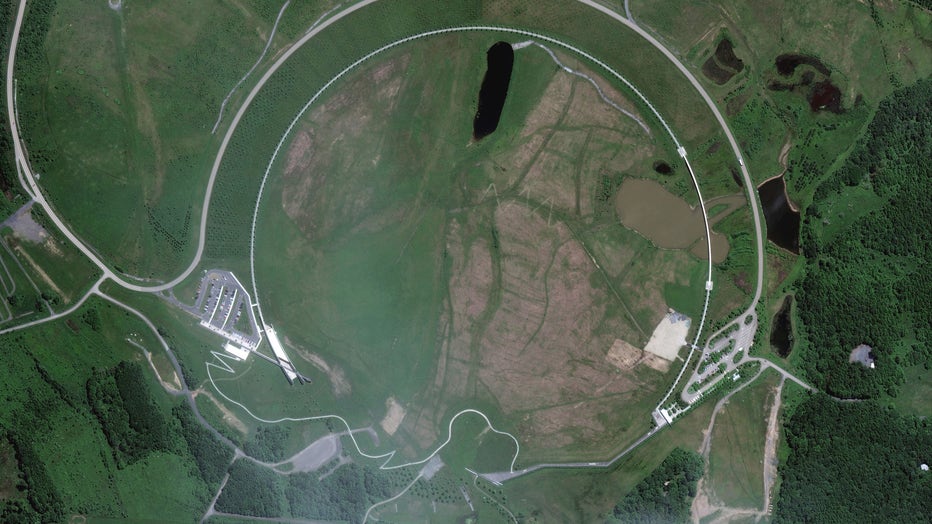 The field where Flight 93 crashed in Shanksville, Pennsylvania, has become the Flight 93 National Memorial run by the U.S. Park Service. Credit: Maxar Technologies via Storyful

The 9/11 attacks prompted the U.S. to launch an international military campaign known as the War on Terror. Part of this included the launch of the first unclassified commercial satellite imagery for mission planning, monitoring and intelligence gathering, according to Maxar Technologies.

The U.S. government began obtaining commercial satellite imagery for mission planning and intelligence in 2002 and continues to do so today.

Maxar Technologies said the commercial GEOINT also played a role in "one of the most pivotal moments in the War on Terror," when 9/11 mastermind Osama bin Laden was killed on May 2, 2011, by the U.S. Navy SEAL Team 6.

U.S. intelligence agencies tracked Bin Laden to a compound in Abbottabad, Pakistan, and used Maxar imagery to study the structure of the compound in detail. The military was able to then simulate and train for the raid, "enabling a precise operation once boots hit the ground," Maxar said.