NEW YORK — A man in a rented pickup truck mowed down pedestrians and cyclists along a busy bike path near the World Trade Center memorial Tuesday, killing at least eight and seriously injuring 11 in what the mayor called "a particularly cowardly act of terror."

The driver was shot in the abdomen by police after jumping out of the truck with what turned out to be a fake gun in each hand and shouting what witnesses said was "Allahu Akbar!," Arabic for "God is great," authorities said. He underwent surgery and was expected to survive.

Officials who were not authorized to discuss the investigation and spoke on condition of anonymity identified the attacker as 29-year-old Sayfullo Saipov and said he is from Uzbekistan and came to the U.S. in 2010. He has a Florida driver's license but may have been staying in New Jersey, they said. 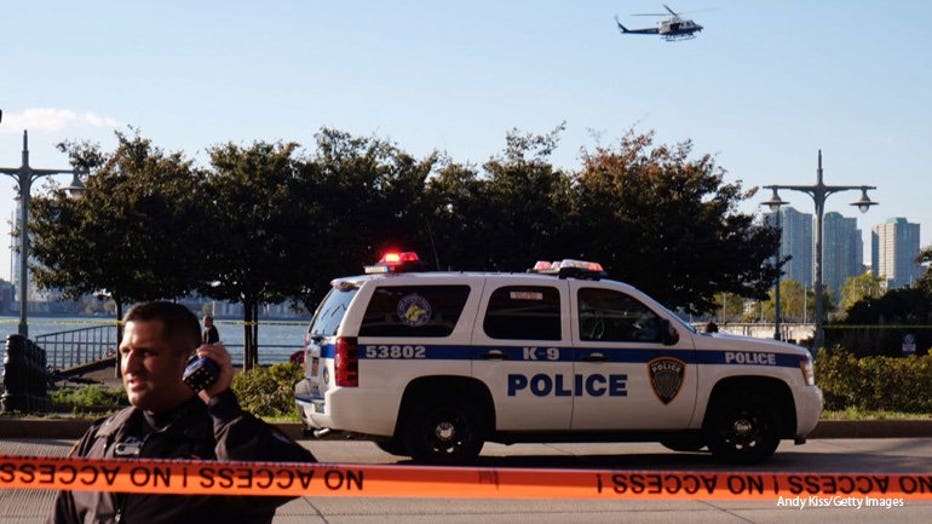 NEW YORK, NY - OCTOBER 31: Police gather at the scene after reports of multiple people injured after a truck plowed through a bike path in lower Manhattan on October 31, 2017 in New York City. (Photo by Andy Kiss/Getty Images) 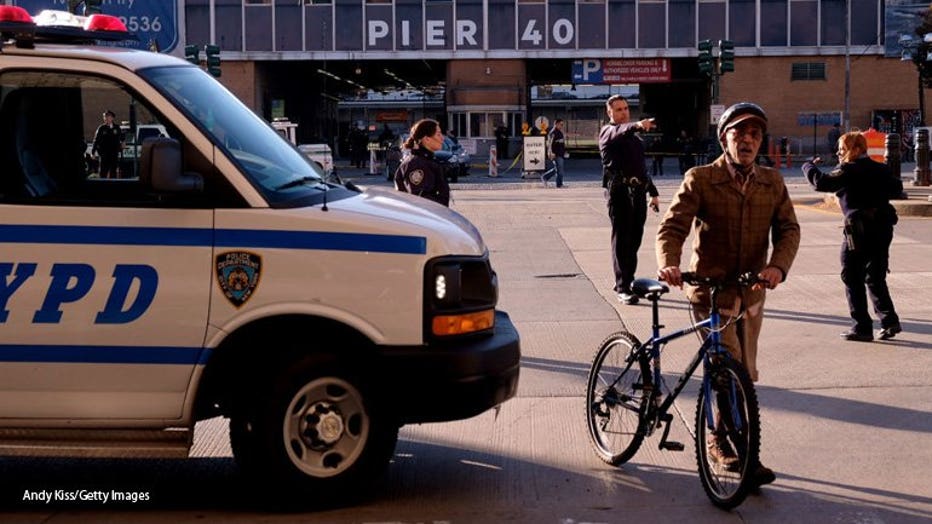 NEW YORK, NY - OCTOBER 31: Police direct people away from the scene after reports of multiple people injured after a truck plowed through a bike path in lower Manhattan on October 31, 2017 in New York City. (Photo by Andy Kiss/Getty Images)

The driver barreled along the bike path in a rented Home Depot truck for the equivalent of about 14 blocks, or around eight-tenths of a mile, before slamming into a small yellow school bus. The mayhem and the burst of police gunfire set off panic in the neighborhood and left the pavement strewn with mangled bicycles and bodies that were soon covered with sheets.

"I saw a lot of blood over there. A lot of people on the ground," said Chen Yi, an Uber driver.

Eugene Duffy, a chef at a waterfront restaurant, said, "So many police came and they didn't know what was happening. People were screaming. Females were screaming at the top of their lungs."

Police closed off streets across the western edge of lower Manhattan along the Hudson River, and officers rushed into the neighborhood just as people were preparing for Halloween festivities, including the big annual parade through Greenwich Village.

"This was an act of terror, and a particularly cowardly act of terror aimed at innocent civilians, aimed at people going about their lives who had no idea what was about to hit them," Mayor Bill de Blasio said.

New York and other cities around the globe have been on high alert against attacks by extremists in vehicles. The Islamic State has been exhorting its followers to mow down people, and England, France and Germany have all seen deadly vehicle attacks in the past year or so.

New York Gov. Andrew Cuomo called it a "lone wolf" attack and said there was no evidence to suggest it was part of a wider plot.

New York City Police Commissioner James O'Neill said a statement the driver made as he got out of the truck and the method of attack led police to conclude it was a terrorist act.

On Twitter, President Donald Trump called it "another attack by a very sick and deranged person" and declared, "NOT IN THE U.S.A."

While police did not specifically blame the Islamic State for the New York bloodshed, Trump railed against the extremist group, tweeting, "We must not allow ISIS to return, or enter, our country after defeating them in the Middle East and elsewhere. Enough!"

Police said the vehicle entered the bike path at about 3 p.m. on West Street a few blocks from the new World Trade Center, the site of the deadliest terror attack in U.S. history. The truck then turned at Chambers Street, hitting the school bus and injuring two adults and two children.

A paintball gun and a pellet gun were found at the scene, police said. At least two covered-over bodies could be seen lying on the bike path, and the front end of the pickup was smashed in, as was the side of the school bus.

Tom Gay, a school photographer, heard people saying there was an accident and went down to West Street, where a woman came around the corner shouting, "He has a gun! He has a gun!"

Gay said he stuck his head around the corner and saw a slender man in a blue track suit running on West Street holding a gun. He said a heavyset man was chasing him.

He said he heard five or six shots, and the man in the tracksuit fell to the ground, gun still raised in the air. He said a man came over and kicked the gun out of his hand. 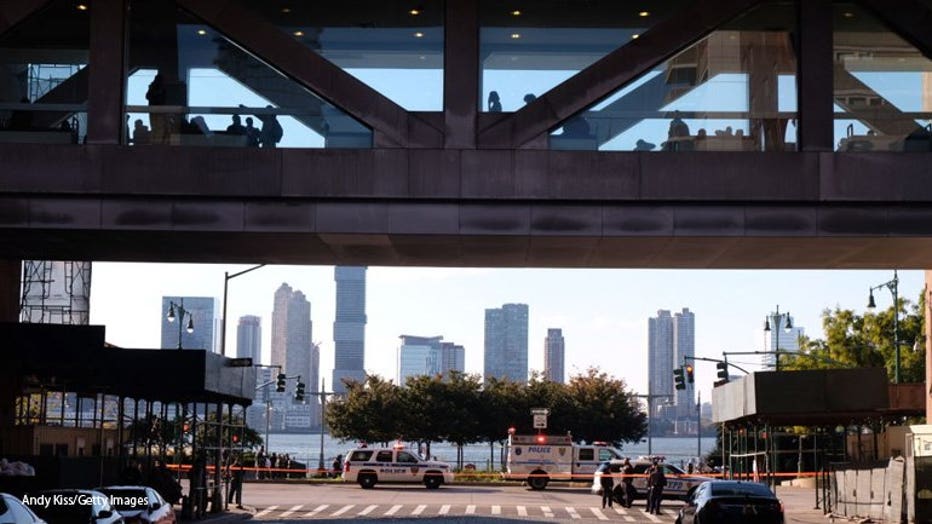 NEW YORK, NY - OCTOBER 31: Police gather at the scene after reports of multiple people injured after a truck plowed through a bike path in lower Manhattan on October 31, 2017 in New York City. (Photo by Andy Kiss/Getty Images)

This is a developing story; refresh for updates.