SAN DIEGO — Firefighters were still battling a blaze Monday on a Navy combat ship that injured at least 57 people and sent smoke billowing over San Diego.

The fire began Sunday morning aboard the USS Bonhomme Richard, apparently in a vehicle storage area as the ship was in a berth undergoing maintenance, according to Rear Adm. Philip Sobeck.

Initially, 17 sailors and four civilians were reported injured but by early Monday the number had grown to 57 and five remained hospitalized for observation, the Navy said.

Firefighters attacked the flames inside the ship while firefighting vessels with water cannons directed streams of seawater into the ship and helicopters made water drops. 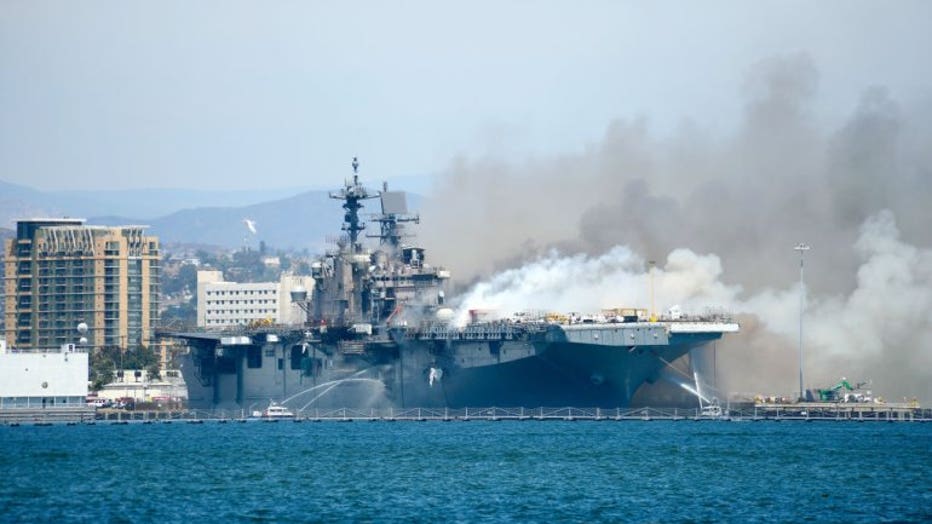 SAN DIEGO , CA - JULY 12: Port of San Diego Harbor Police Department boats combat a fire aboard the amphibious assault ship USS Bonhomme Richard (LHD 6) at Naval Base San Diego, July 12, 2020. On the morning of July 12, a fire was called away aboard

“Sailors across this waterfront are absolutely doing a magnificent job," Sobeck said at a press conference Sunday.

He said there was no ordnance on board, and while the ship holds a million gallons (3.7 million liters) of fuel it was “well below” any heat source.

About 160 sailors and officers were on board when an explosion and flames sent up a huge plume of dark smoke from the 840-foot (255-meter) amphibious assault vessel, which has been docked at Naval Base San Diego. That's far fewer than the thousand typically on the ship when it’s on active duty, said Mike Raney, a spokesman for Naval Surface Force, U.S. Pacific Fleet.

Sobeck, commander of Expeditionary Strike Group 3, said the Navy thinks the fire began somewhere in a lower cargo hold where equipment and vehicles are stored. 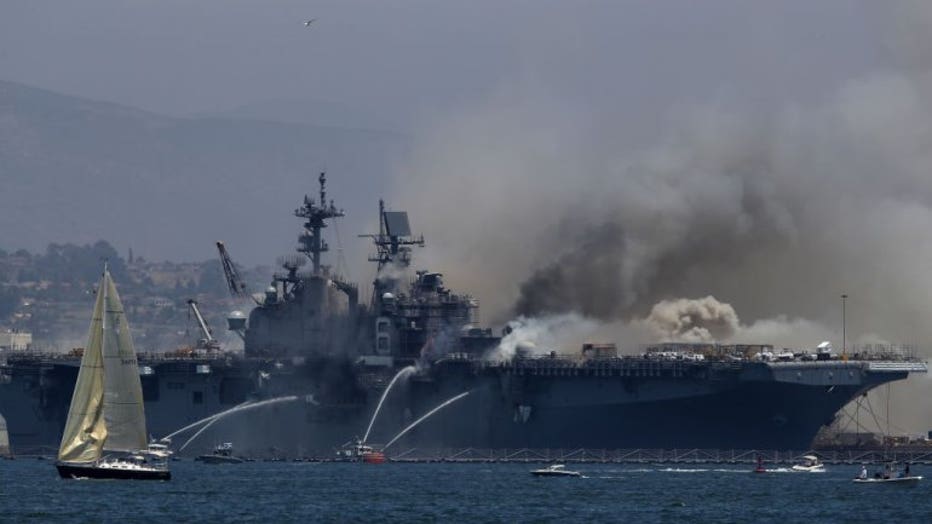 SAN DIEGO, CALIFORNIA - JULY 12: A fire burns on the amphibious assault ship USS Bonhomme Richard at Naval Base San Diego on July 12, 2020 in San Diego, California. There was an explosion on board the ship with multiple injuries reported. (Photo by S

The fire spread up into office and personnel berths where it was fueled by paper, cloth, rags or other materials in a standard fire, Sobeck said. He said he was not concerned about the air quality or toxicity around the fire.

“There was a report of an internal explosion," Sobeck said. “What we cannot ascertain is exactly what the explosion was caused from."

The admiral suggested that the compartment heated up and over-pressurized.

The 23-year-old ship has the capacity to deploy and land helicopters, certain types of short-takeoff airplanes, smaller boats and amphibious vehicles.

Because of its age, a fire could be particularly destructive, especially if it reached the engine room and other tight spaces with machinery, said Lawrence B. Brennan, a professor of admiralty and international maritime law at Fordham University in New York. 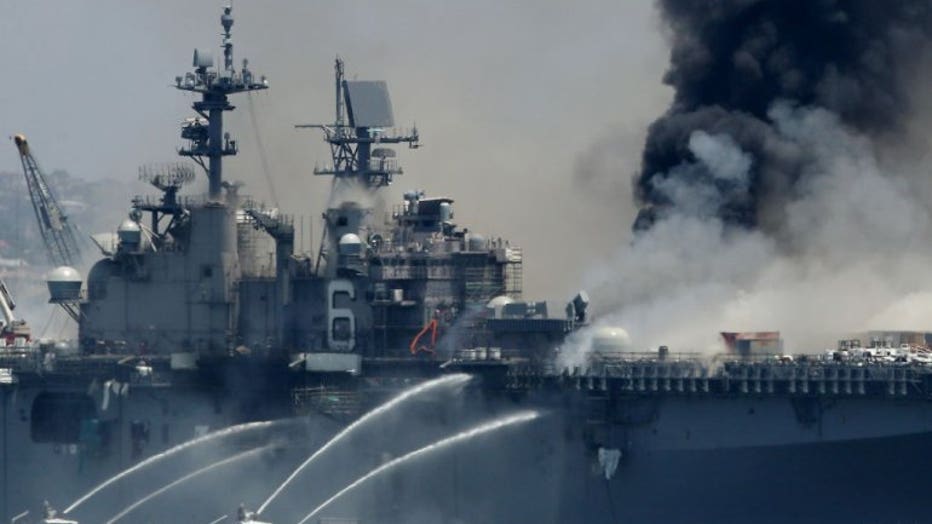 SAN DIEGO, CALIFORNIA - JULY 12: A fire burns on the amphibious assault ship USS Bonhomme Richard at Naval Base San Diego on July 12, 2020 in San Diego, California. There was an explosion on board the ship with multiple injuries reported. (Photo by S

“The heat of a fire of this nature can warp the steel, and that can be a major problem for any ship,” said Brennan. “On an older ship, it's even more of a problem.”

Two other docked ships, USS Fitzgerald and USS Russell, were moved to berths away from the fire, officials said.

The ship was commissioned in 1998, and is the third to bear the name Bonhomme Richard. During the Revolutionary War, Capt. John Paul Jones named the first ship after the French translation of the pen name Benjamin Franklin used as the author of “Poor Richard’s Almanac.”