RICHMOND, Va - Remembering everyone's name is easier than you would think, said Michael and Margaret Baudinet.  The couple, who live in Goochland, Virginia, are the proud parents of quintuplets.

The Baudinet quints were born six months ago at a hospital in Arizona that specializes in multiple births, but have since returned to Virginia and made their public debut Tuesday at the McGuire Woods Law Firm, where dad Michael is an attorney.

"Once we got them home, we realized, oh, they're actually pretty distinct," Michael said. 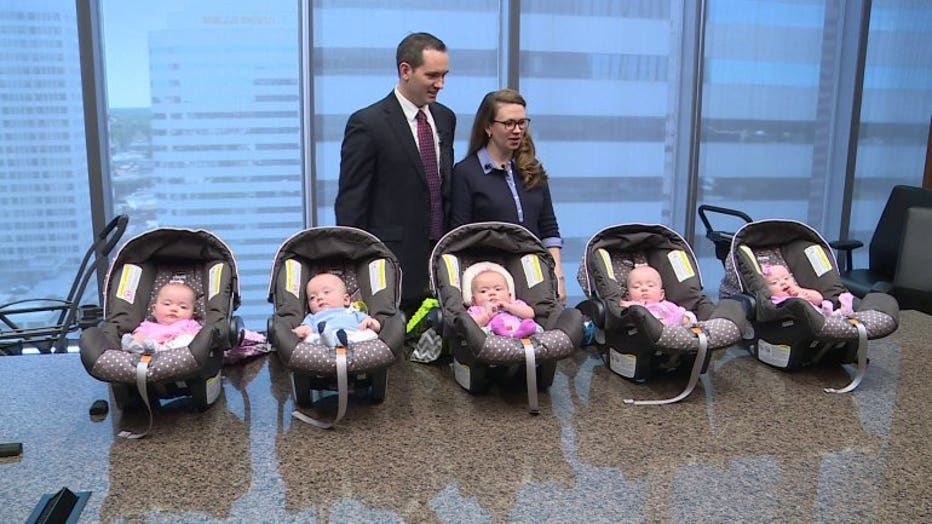 "We even know their cries. We can be sitting downstairs and hear somebody crying in the nursery, and we're like, oh that's Millie or, oh, that's Izzie," Margaret continued.

"Ava Louise, Clara Catherine, Camile Whitney, Isabelle Francis, and Luke Thomas (the sole boy) were a blessing to their parents that was a long time coming.

They had been trying to have children for more than 18 months and experienced miscarriages and other setbacks. That's when they sought fertility treatment.

When word finally came that Margaret was pregnant, the doctors originally told the Baudinet's they were having quadruplets.  That was obviously incorrect.

"You know I was terrified. But at least I was able to talk, unlike this guy," Margaret said pointing at Michael.

"I didn't talk for about a month after finding out. Literally, a little bit of shock going on," he said.

Both parents said keeping their house running is the new family business.  With the help of dozens of friends and two full-time helpers, Michael and Margaret are both managing full-time jobs on top of their full-time parent job.

"Getting up in the morning is hard because I don't want to leave these guys, but then, you know, they got to get fed," Michael said with a grin.  "It's pretty crazy, our quiet house has turned into a train station."

"It's like running a small business. I create a calendar every week. I make a plan for every 30-minute interval of who's taking care of the babies," Margaret said.

Finding the exact odds are almost impossible, but conservative estimates show parents have a one in 60 million chance of having quintuplets.  The Baudinets have very little time to think about odds, but they have had time to reflect on the big picture for their big family.

"People are truly kind. You just have to give them the opportunity, and that's been truly heartwarming for us," Margaret said.

"When Michael gets home at night Luke smiles a big smile. Clara vomits on me, but then feels a lot better. We find the joy in the small things and I like that's what we've taken away from this."

Margaret blogged about their family's journey too.  It's called "A Bundle of Baudinets," and you can read it by clicking here.