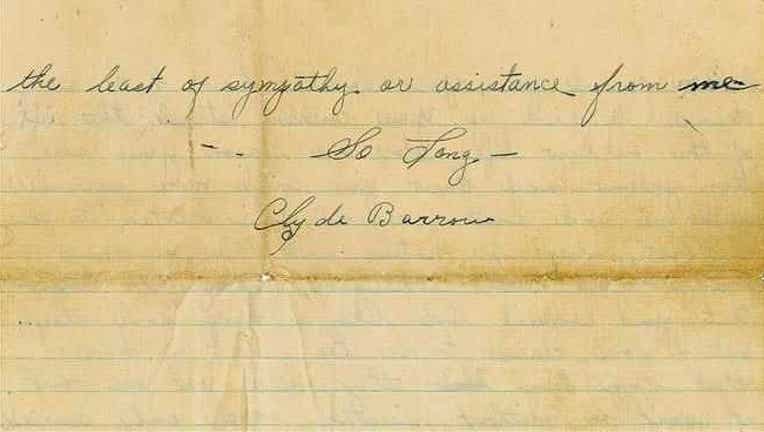 This image provided Wednesday by RR Auction of Boston shows the last page of an April 1934 letter from Depression-era gangsters Bonnie and Clyde to a former member of their gang they felt had betrayed them. (Uncredited)

The cursive is Bonnie's; the signature, Clyde's. A four-page letter written by the duo in April 1934 is hitting the auction block in September, and it's a fiery one.

It's addressed to one Raymond Hamilton, a one-time member of their gang who, at the time the letter was written, was behind bars in the Dallas County Jail.

That he was there was a reflection of just how "yellow" he was, per the letter, as he didn't try to flee as he was captured.

The Dallas Morning News reports the trio had a falling out over Hamilton's girlfriend (the "prostitute sweetheart" the letter refers to); the AP cites a disagreement over how to divvy up $4,000 they had taken from a Texas bank earlier that year.

This after Clyde Barrow and Bonnie Parker famously rescued Hamilton and four others from a Texas prison farm in January 1934, per a New York Daily News article written that year.

Hamilton was serving sentences totaling 262 years at the time. The lines are biting. "I should have killed you then I would have saved myself much bother and money looking for you," reads the letter, which Boston-based RR Auction says was likely dictated by Barrow to Parker, who had superior writing skills.

It closes by telling Hamilton, "I hope this will serve the purpose of letting you know that you can never expect the least of sympathy or assistance from me. So long." But he may not have ever seen it.

Sheriff Richard "Smoot" Schmid intercepted it and later publicized it; his family is now auctioning it off. The Morning News notes Barrow and Parker were killed the month after they wrote the letter.

Hamilton's fate was no better: Death by electric chair in 1935. Read more from the letter, including a prescient line, here.

This article originally appeared on Newser:1934 Letter Reveals a Livid Bonnie and Clyde