He was sworn into the Maricopa Police Department, becoming an honorary police officer, even getting a badge and uniform.

It was a special day for him and his family.

"It was really happy for all of us. My mom cried tears of joy. My grandma almost cried. I was very happy too," Christian sister said.

It was certainly a memorable one, too, for Maricopa Police Officer Donnie Burnias. "This is probably one of the most special moments in my career," the officer said. 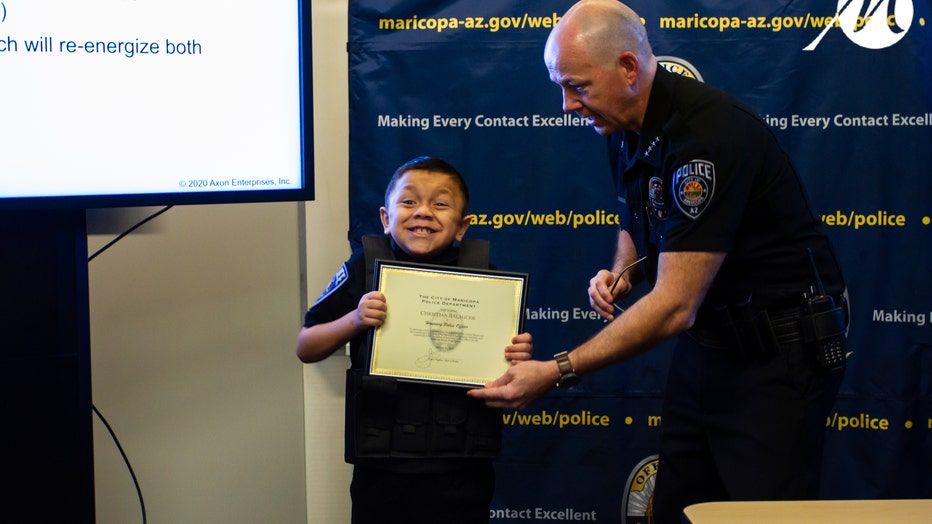 An 11-year-old Arizona boy and his family were able to forget about his terminal illness for the day and he was sworn in as an honorary officer as he beamed with a smile.

When Christian was just six-months-old, doctors discovered that he has a brain tumor. Since then, he’s been in and out of the hospital.

For now, Christian is doing well, and he lights up any room he walks into.

Christian and Burnias have a special bond – It was about a year ago when he found Christian after he escaped his home.

"He’s just full of life and energy. He just kept wanting to come with me to help me do my job, and why not make him an honorary police officer? He’s been through a lot his whole life. Bring some hope to the family," Burnias said.

The honorary ceremony was named Operation Remember Me – after his favorite song.

"He's a police officer here at the police department, and we’re responsible for him. Anything happens to him. He’s our brother, he’s our family," Burnias said.

Tune in to FOX 10 Phoenix for the latest news: