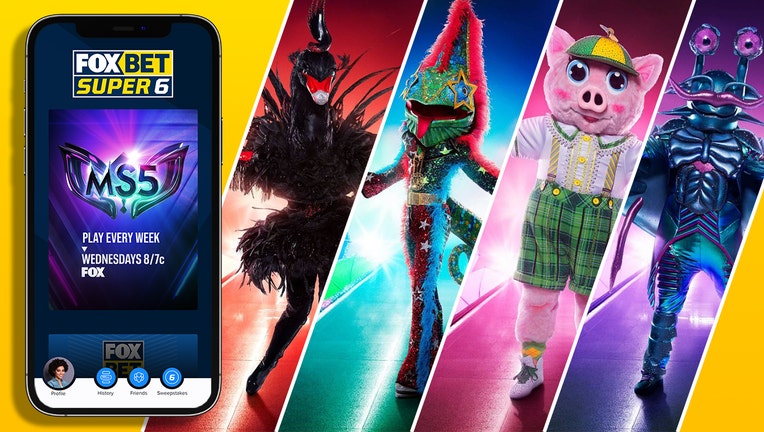 Every week, “The Masked Singer” fans get the chance to watch their favorite show and win big cash prizes thanks to the FOX Super 6 app. (FOX Super 6.)

LOS ANGELES - Every week on the fifth season of "The Masked Singer," fans get the chance to predict six questions related to each episode on the FOX Super 6 app.

Only 35% of participants correctly guessed that "Grandpa Monster" would be the contestant to get sent home last week, earning one lucky viewer $10,000. Getting all six answers correct increases a participant's chance of winning, but the prize drawing is completely random.

RELATED: ‘The Masked Singer’ delivers another big reveal and another $10K in FOX Super 6 contest

Just a single correct guess gives players a chance to put cash in their pockets just by watching their favorite show.

That’s 10,000 reasons why you should tune in to this week’s riveting episode, where another masked performer will be revealed.

Grandpa Monster was revealed on The Masked Singer

The fifth season of The Masked Singer continues to dish out unforgettable reveals one after the other.

More than 214,000 people entered last week’s contest, and Sherrie, who resides in Kentucky, was the winner to take home the big cash prize. Sherrie plans to pay off all her bills with the extra cash.

This week’s questions are:

Considering how shocking the previous reveals have been, there’s no telling who could be under the masks.

But it wasn’t enough to continue on to the next round as judges quickly snuffed him out.

"I don’t think it’s a professional singer," Jenny McCarthy said, trying to determine with the other panelists who was under the mask.

"I will definitely not be releasing an album because clearly, I don’t got what it takes," Paul recalled in an exclusive post-performance interview.