I love it when March does its best impression of April. For a week long-stretch in the middle of the month we even saw an imposter of June. Not everyone loved the warm up, especially snow lovers who put away their skis and sleds early while plow drivers saw their wallets get thinner. Unless you’ve been living under a rock you know this had been an extraordinary month of mild weather in Milwaukee and Wisconsin. And even if you were living under a rock, didn’t you notice how warm the rock became with no snow to cover it?

There are many reasons we basically skipped the last few weeks of winter. Without going too in-depth (and having me put you to sleep with nerdy weather explanations) here are a few bullet points.

1)   Lack of snow cover: After a quick +4” snow on March 2nd our above freezing temps, warm ground from a mild February,  and a higher sun angle helped to quickly melt our last blanket of snow. In fact, we haven’t had a measurable snow depth since March 6th!

2)   High and low pressure pattern across North America: We found ourselves under a pattern sending a persistent southerly wind from around March 13th to March 22nd. A sprawling high camped out over the western Atlantic with a series of lows in the Pacific Northwest. These systems work together like two gears spinning in opposite directions. We were lucky enough to be right in the middle where the gears spun south to north pushing warm air from the Gulf of Mexico to the Midwest. With such a large pattern in place extending beyond both coasts, it took a while before we cooled from the record breaking mid-March temps. 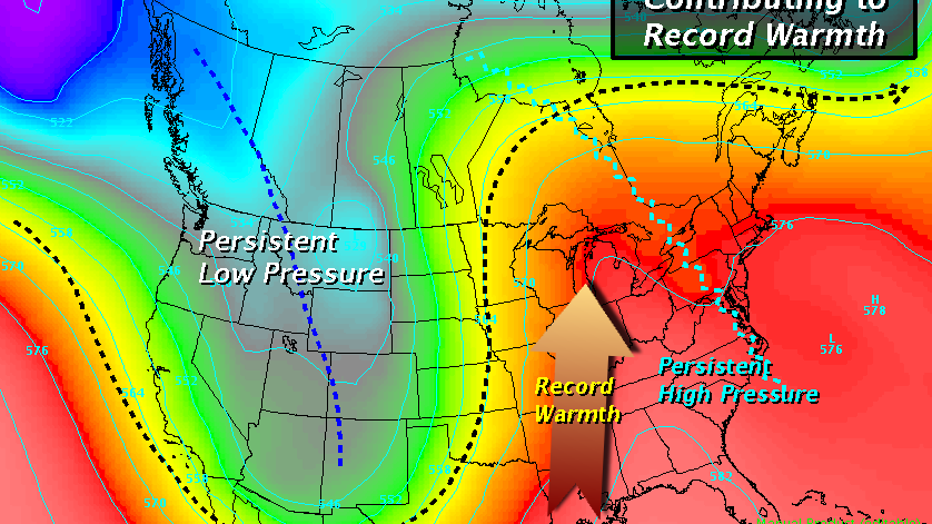 In terms of daily records we set 5 new record highs and 6 new records for warmest daily minimum. All the record warm minimums were set in a row from the 16th to 21st. On March 20th we had the earliest +80 degree day ever (in terms of the calendar year). The next day we reached 84° which is the highest temperature for any March day on record.

With only a few days left in the month we are all but set to break the record for warmest March in Milwaukee since records began in 1871. For the first 28 days we’ve averaged 49.8°. In second place is March of 1945 with an average of 43.3°. So unless an unexpected blast of sub-zero Arctic air descends on the area for the remainder of the month, the record will fall.

As for April, and whether or not more record warmth is on the way, I’ll leave you with a famous phrase borrowed from the financial world: “past performance does not guarantee future results”.