With all eyes on the Gulf Coast as Hurricane Isaac approaches many comparisons have been made between Isaac and its infamous predecessor, Katrina. While there are a few similarities, for the most part, it’s like comparing a Yugo to a Mack Truck.

Timing: One of the more ominous similarities between Isaac and Katrina is their late August arrival. Katrina made its Louisiana landfall on August 29th. Issac is making its way to the same area 7 years later on August 28th. For both storms Louisiana was the second stop on its U.S. tour. Katrina skipped across southern Florida on August 25, 2005 as a category 1 hurricane. Isaac was a tropical storm when it clipped the Florida Keys on August 26th (not an official landfall since the eye was just west of the Florida Keys).

Path: With both storms stopping by Florida on their way to the Louisiana coast it’s obvious their paths would be similar. Katrina took a bit of a looping path across the Gulf spending a little more time over the water gaining strength. Isaac took more direct route to Louisiana, but overall, the paths were quite similar.

Storm surge: With both storms approaching the Mississippi River Delta from the south the storms’ powerful winds funnel their storm surge into the Chandeleur Sound between the Mississippi Delta and Mississippi coast. This geographic layout traps the rising water causing the storm surge to be higher than a straighter coastline. But in the end the weaker Isaac doesn’t have the muscle to match Katrina’s devastating +25ft. storm surge. Depending on the tides, Isaac’s max storm surge may reach 6-12ft. 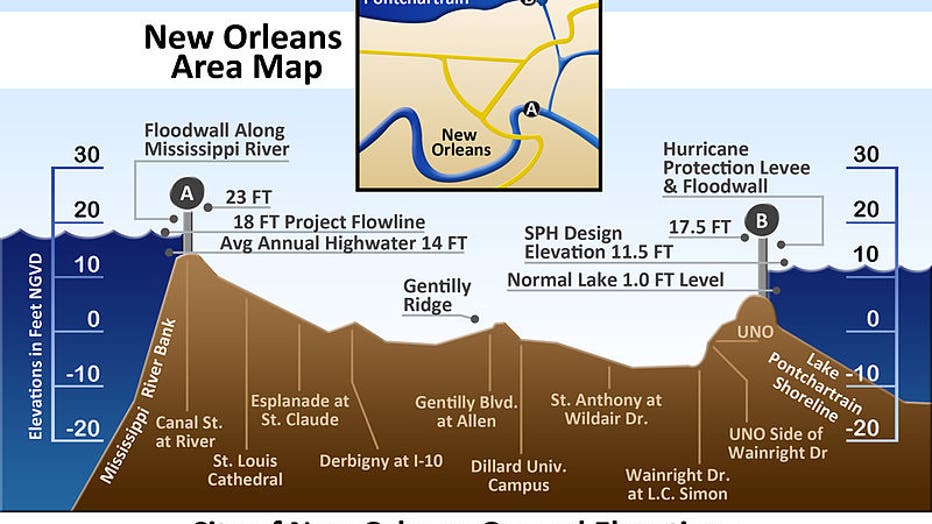 Preparation: When Katrina reached its peak category 5 strength (wind speeds made it up to 175mph while over the Gulf) it was clear New Orleans was in its cross hairs. Mandatory evacuations were ordered for the area but more than 100,000 people decided to ride it out or didn’t have a good way to flee. The result was catastrophic with over 1,800 deaths as the levees failed and the city flooded. Because of the tragic scene residents and emergency responders appear to be wiser this time around. As the event unfolds tonight we will see if the lessons from Katrina help those affected weather the storm.