In most winters around here you can ask a person if it’s been cold and the response will probably sound something like “well yeah, but this is Wisconsin”. Translation, it’s not any colder than what’s expected or what can be tolerated.

For all but the extreme winter enthusiast this season’s response would likely sound a bit different. But how much of this grueling winter is perceived?

Through Feb. 25th, we’re in the neighborhood of 10th place for coldest winters. That’s taking the high and low temp each day since December 1st and getting the average which comes out to 17.5°. Since record keeping began 144 winters ago, 10th place puts us in the top 7% of coldest winters with only 3 days left (meteorological winter is Dec. 1st - Feb. 28th).

So we know the overall temperatures have been frosty, but what about the coldest of cold days? As of Wednesday morning we’ve totaled 25 days where temps dip to 0° or colder. That is the most in 37 years!

The average number of zero and sub-zero degree days is 12 per year when you look at the entire record book. But in the latest 30 year average is only 8 days. So we may be on to something, have fewer bitter cold days made us soft?

This is at least part of the equation. Until this winter the amount of “really cold days” has been on a decline. Since the late 90s we’ve haven’t seen a single winter with more than 10 days of zero and sub-zero weather. The winter of ’09-’10 never even dropped below +1°. 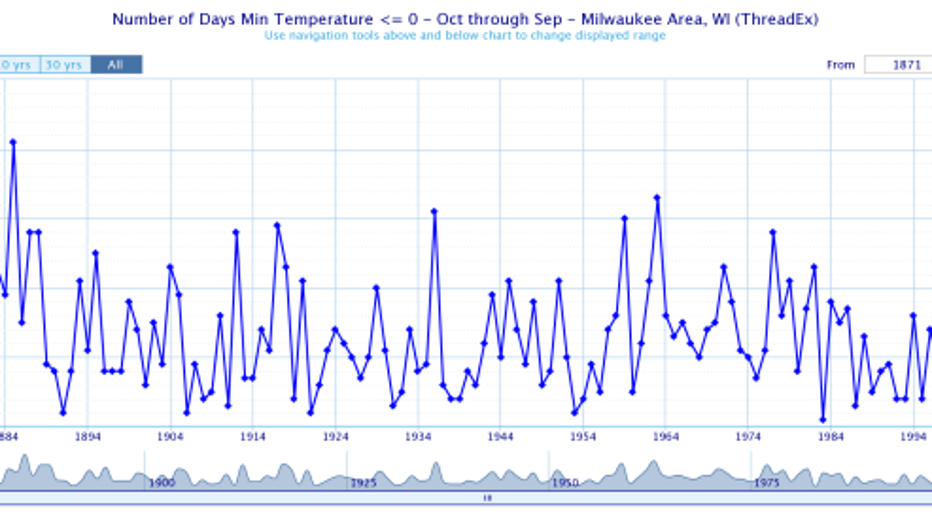 The number of days each winter when Milwaukee dropped to 0° or colder.

If you have a relative in his/her golden years telling you of how cold it used to be, it looks like their story may have some credence. Winters with a dozen or more bitter cold days were certainly more common.

And years from now, people may be telling stories of the great winter of ’13-’14. By then the story will probably be exaggerated to include every pipe in town bursting, every road covered in potholes, and Lake Michigan staying iced over until May. Wait, when I think about it the pothole claim isn’t that far off.