MILWAUKEE -- Maybe growing up, or still to this day, you wondered how we get rain. We all take this process for granted, and it happens constantly in our atmosphere.

It all starts with tiny particles floating in the air, and grows quickly into rain. In some cases, it can happen in less than 20 minutes! But how do we go from an object smaller than a pinhead, and end with a raindrop? 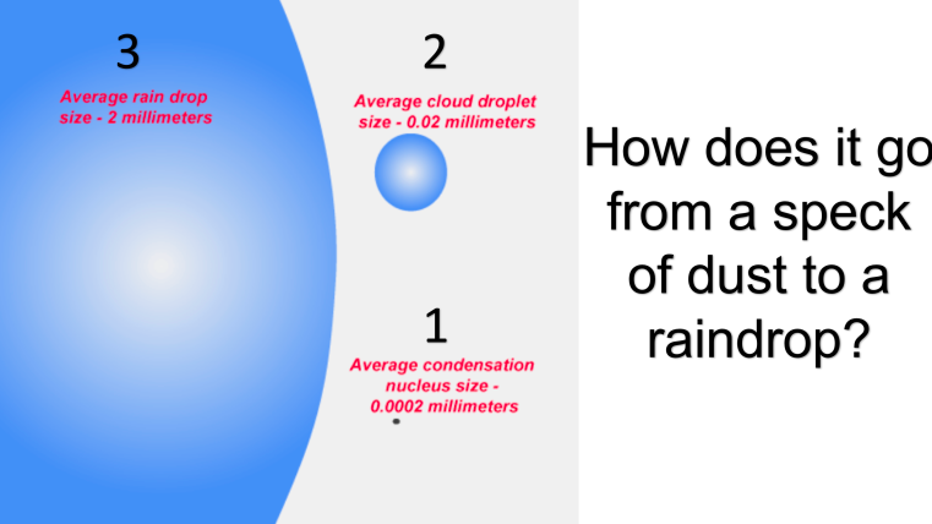 The proportional size of a raindrop compared to the average size it starts as, a small cloud condensing nuclei

Dust, pollen, pollution and other small particles are constantly floating in our air. This is how rain starts, and in meteorology, we call it cloud condensing nuclei! Pure water vapor from evaporation is tiny, but on its own, it can't grow.  As air rises with an updraft, it cools and condenses on these small particles that we'll simplify and just call dust. 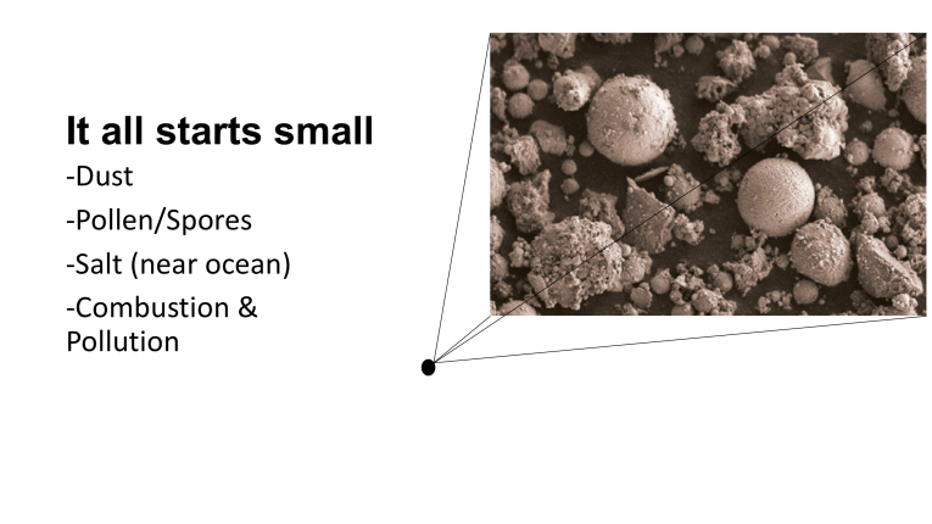 Dust and other small particles more often than not dissolve into the water that condenses onto it. It's no longer a pure water droplet, and has a lower vapor pressure than the surrounding air. This pulls other surrounding droplets around it to slowly diffuse onto its surface, and further grows into what is now a cloud droplet.

Millions and millions of these droplets are what make up a cloud we see with the naked eye. These tiny droplets reflect light, but as the cloud grows, less and less light can shine through, thus, thunderstorms appear dark in color. But there is still a lot of growing to do, which is much faster! 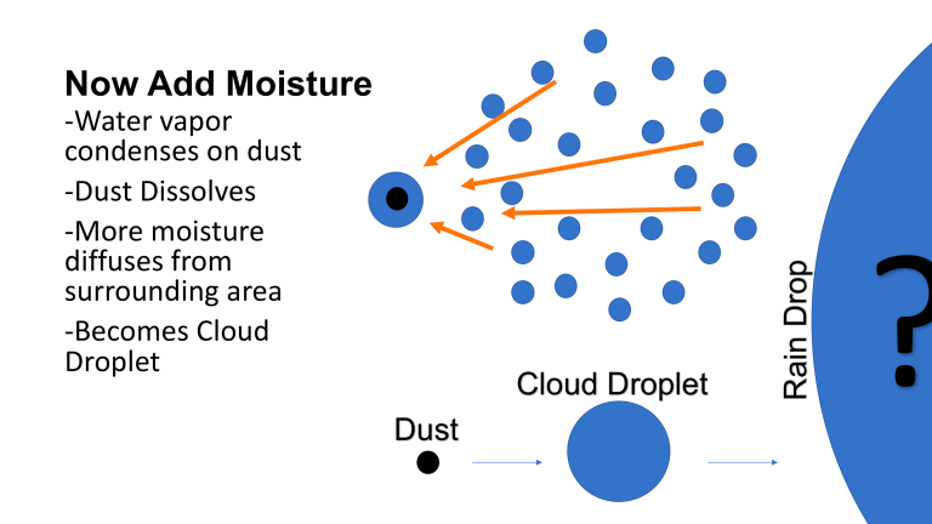 Within the cloud, droplets are flying around at different speeds, colliding, and thanks to surface tension, sticking to each other and growing rapidly. It's like watching your laundry in the dryer constantly tumbling around. The cloud droplet has now grown dramatically, but it's not done yet! 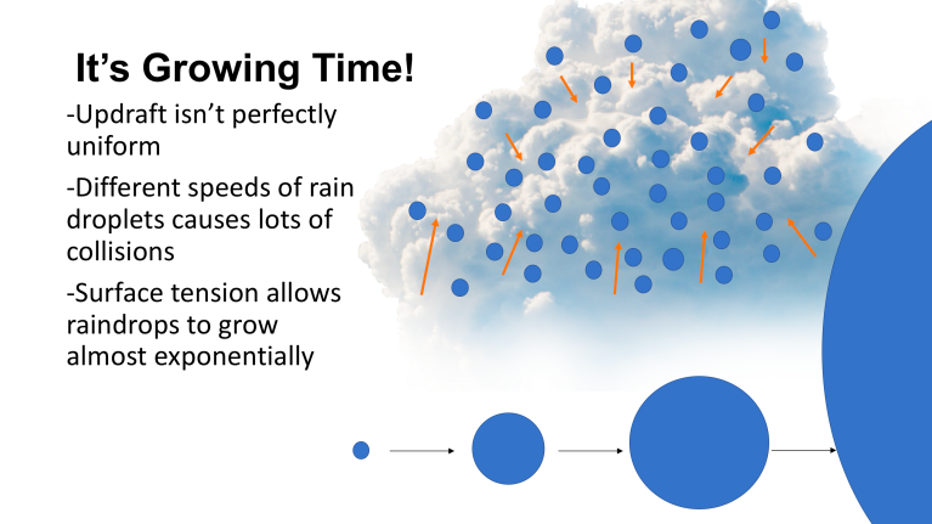 Finally, the cloud droplet has grown large enough the updraft force can't hold it, and gravity starts to win the battle. As it falls to Earth, it creates a small eddy of air behind it. Once the cloud droplet falls through the cloud, it sucks in small droplets to its back, and continues to grow as it falls to the ground. We call this process in meteorology coalescence. 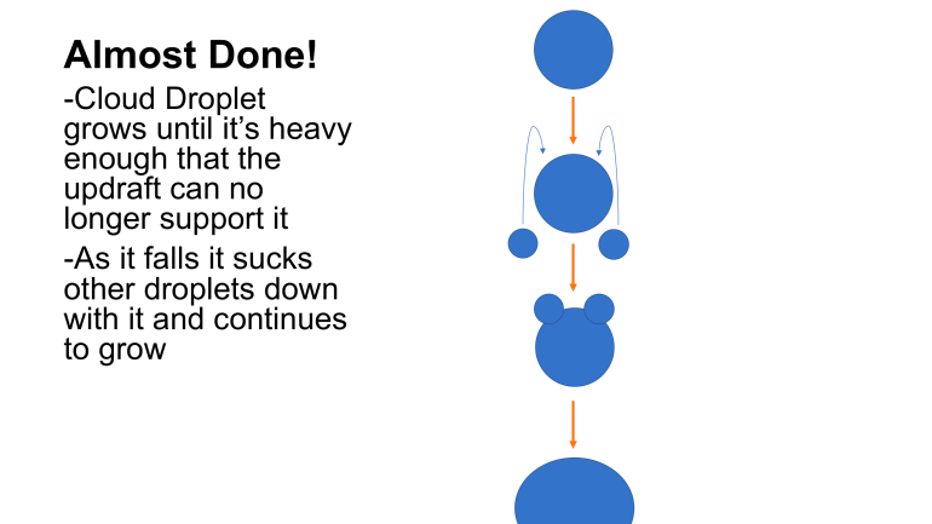 The cloud droplet is now a raindrop, but it isn't invincible. Rain doesn't look like a classic teardrop as it falls to the ground. Thanks to air resistance pushing against gravity, it causes the raindrop to bow, and look like a hamburger bun. It's possible air resistance can split the raindrop in two, and the process starts over again in some circumstances.

Most of the time, this happens very close into the ground and there's no turning back. It's now beneficial rain for plants and animals, which makes photosynthesis and mitosis possible, and thus, life on Earth exists. 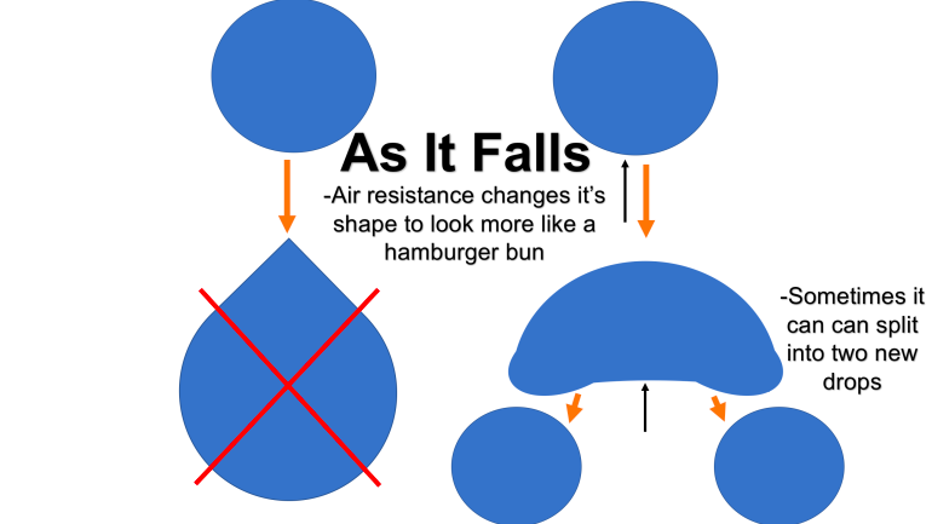 From small particles, you need a microscope to see it turning into falling rain, but the physics behind precipitation is quite interesting. Although most of the explanations given are simplifications of the actual process, the end result is the same.

That's how we get rain!