For the last 6 months the earth has been moving towards the sun at an average speed of about 710 mph. Ahhhhhhhh! The Mayans were right, everyone panic! OK, back off the ledge it’s going to be alright. This happens every year with the earth retreating from early January to early July. You see the earth’s orbit isn’t a perfect circle but is actually an ellipse around the sun. The means our distance from the sun changes everyday though not by very much. Today, January 4,2012 is the perihelion.  “Perihelion Day” isn’t real, I made it up so yes the post office is still open.

We are currently about 91,402,640 miles from the sun. Over the next 6 months our orbit will take us to the aphelion, the furthest distance at 94,509,460 miles. I feel sorry for the guy who had to run the tape measure that far, hope he had sunscreen. This minor change in distance when compared to the total doesn’t really affect our changing seasons which is why it’s still colder in January for the northern hemisphere. With the earth’s axis tilted at 23° the low sun angle of January spreads out the sun’s energy limiting heating. So instead of the 80s we typically see in July with a more direct sun angle we get the 20s of a typical January day.

(Comparing the size of the sun in our sky at perihelion vs. aphelion. No much of a difference) 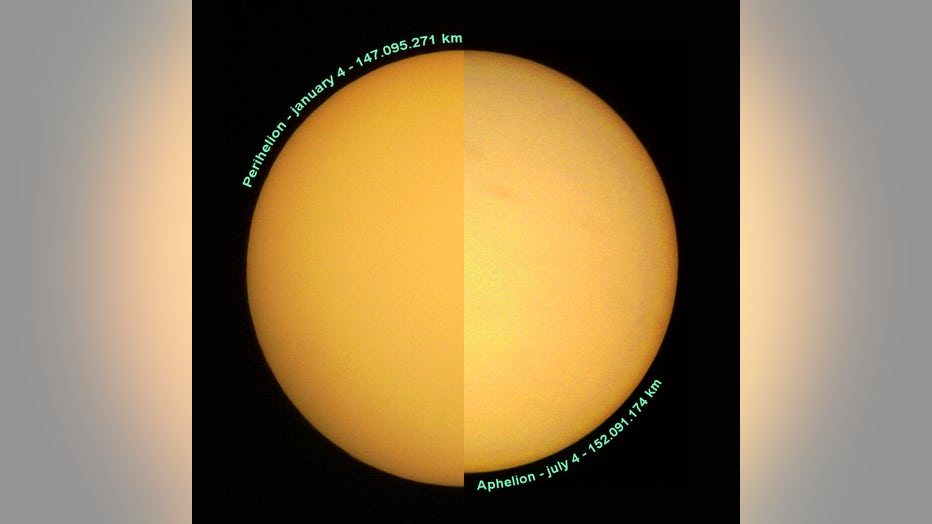 Every planet in our solar system (we will include Pluto for now) has an elliptical orbit like this. Neptune and Venus almost have a perfect circle for orbit but not quite. Mercury and Pluto, the closest and furthest from the Sun have the most elliptical orbit. In fact Pluto’s distance changes so much that for about 20 years of its 248 year journey it is actually closer to the sun than Neptune. That last time this happened was from 1979 to 1999. But since Pluto was reclassified as a “dwarf planet” or “plutoid” in 2006 it looks like Neptune is back to being the planet furthest from the sun. Sorry Neptune.