It wasn't so much the snow that caused the damage, but rather, the wind and waves, which resulted in decking strewn about like matchsticks near the South Shore Yacht Club -- with freezing temperatures leading to an icy mess.

The wild weather Saturday forced the port to prohibit public access to Jones Island and caused flooding on all major roadways at the port. Winds gusted up to 50 mph, and waves reached 6 to 8 feet (1.8 to 2.4 meters) high. 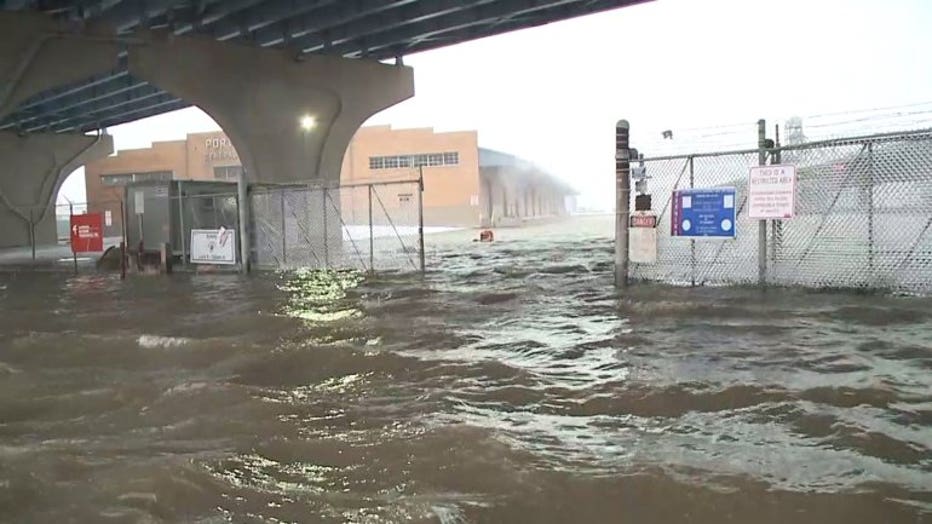 Floodwaters were receding Sunday, he said. The inner harbor is expected to reopen early Monday, and tenants on Jones Island will have access to roadways.

The wind and water stripped off dock wall material and pushed it inland, and frozen floodwaters covered railroad tracks in a foot of ice, Schlicht said. No one was hurt.

At the South Shore Yacht Club, the waves punched holes in the breakwater that normally provides a safe harbor in Bay View. 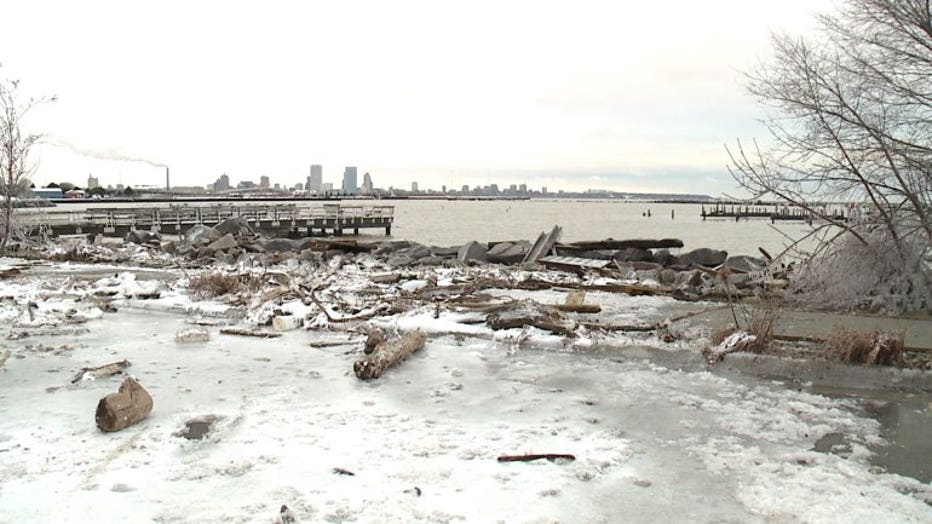 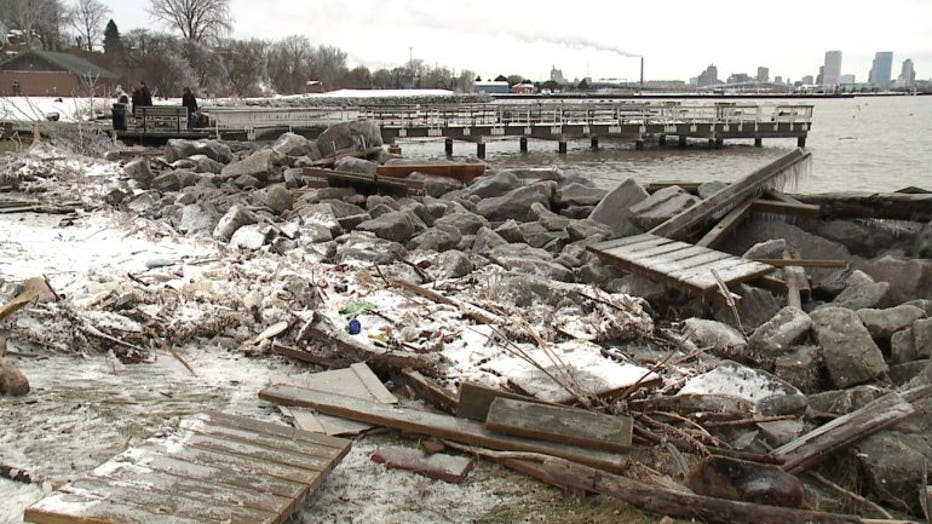 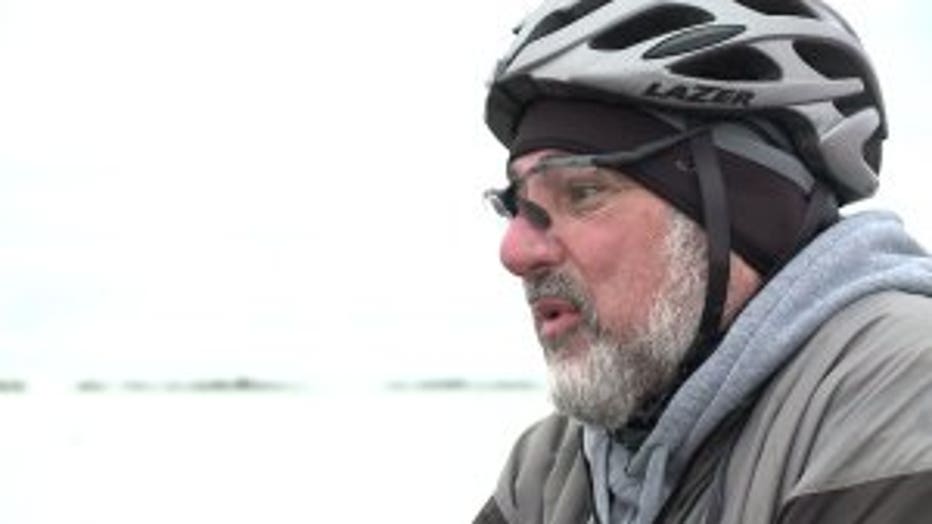 "There wasn't much of a beach left to begin with, and then, when you have 10-foot waves, it's going to come up over the top," said Mike Obradovich, who lives in Bay View.

Obradovich, who frequents the lakefront bike trails, said the storm didn't spare large sections of it.

"You can see a lot of erosion," said Obradovich. "There's wood and trees thrown up on the shore where, normally, there's no water. and if you go down farther than Texas Rock, there's probably a hundred-yard excavation, erosion, that wasn't there yesterday." 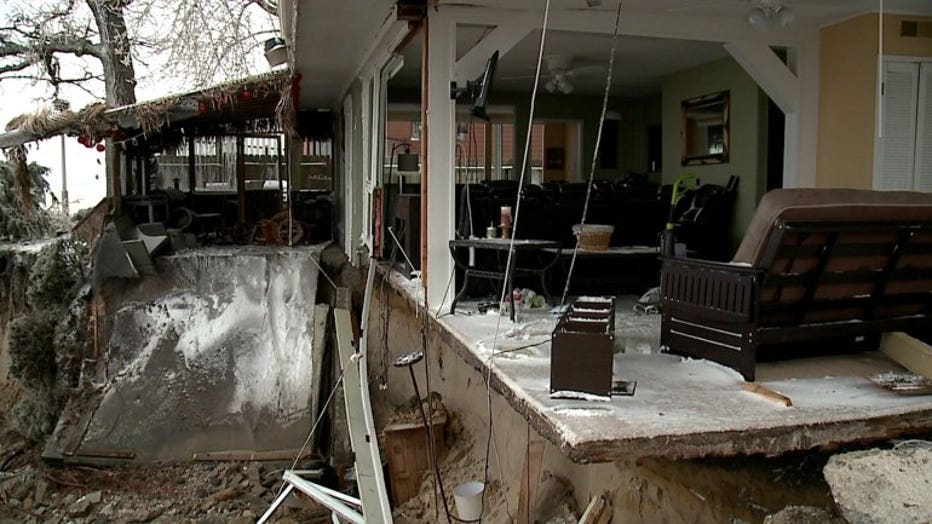 In Pleasant Prairie, FOX6's cameras on Saturday captured glass windows shattering on a lakefront home in Pleasant Prairie -- as the waves pounded the shoreline below it. A concrete sidewalk looked more like a diving board -- hanging over the edge with lamps and vertical blinds dancing in the wind. Family and friends pitched in to try to save the renter's personal photos, clothes, and valuables. It was the neighbors next door who called for help on Saturday. Craig Roepke, Pleasant Prairie fire chief, came out to the home to post a notice on the property -- deeming it uninhabitable.

It remained standing Sunday, albeit a little more slanted.

The National Weather Service issued a lakeshore flood advisory for five counties through Sunday morning as a result of the wind and waves. Up and down the coast, the damage drew dozens eager to take a look at what Lake Michigan wrought.

"I've seen the waves on Lake Michigan before," said Anthony Pappalardo. "I've lived here my whole life, but never heard of waves this big ever before."

With the waves subsided Sunday, Milwaukee County leaders began assessing the damage -- and who would be responsible for what, from the breakwall to the broken pieces of pier littering the land.

"No one expected this," said Jason Haas, Milwaukee County supervisor. "Perhaps we should have. This is, really, a freak storm."