It is thought that the dinosaurs, as well as most animal and plant life on Earth, were wiped out by a drastic cooling approximately 65 million years ago. The culprit was most likely a huge asteroid or comet colliding with Earth and sending dust and ash into the atmosphere, blocking sunlight. A massive tidal wave from the collision probably didn't help matters either.

Geologists believe the collision sight is an underwater crater called Chicxulub (Chicks - a - lube) located next to what is now the Yucatan Peninsula in the Gulf of Mexico. The crater is 110 miles wide. 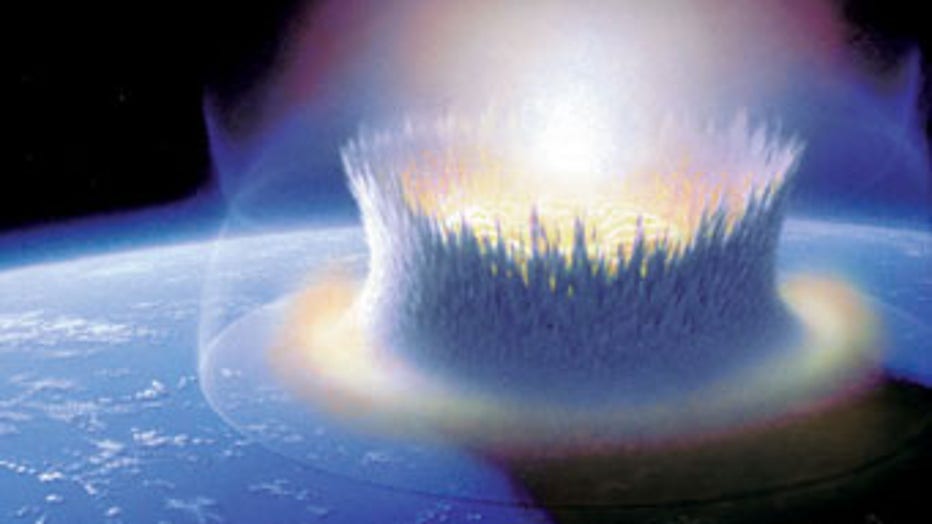 However, a smaller asteroid or comet may have collided with Earth prior to the main event in an area located in central Ukraine. There is a 16 mile diameter crater named Boltysh located there. Using isotopic dating techniques, scientists believe the Boltysh impact was 65.2 million years ago and Chicxulub 65.5 million years ago, give or take a few hundred thousand years.

Researchers from King's College in Scotland drilled into the rock sediments in the floor of the Boltysh crater. They discovered fossil evidence that ferns and flowering plants had just started to grow back before they were wiped out again by the larger explosion from Chicxulub 2,000 to 5,000 years later.

The researchers believe that the asteroid belt, existing between the orbits of Mars and Jupiter, got disturbed by something and began to launch large rocks through the inner solar system. Perhaps two large asteroids in the belt collided and their fragments impacted Earth within a relatively short geologic period.

A 4.6 billion year old Earth is bound to have some interesting stories in its history. Wouldn't it be interesting if we could go back in time and hear the story from the dinosaurs' point of view!