Something very unusual happened Tuesday night (5/14/13) in southeast Wisconsin. A night that did not have any thunderstorms in the forecast gave us damaging winds but very little rain and almost no thunder and lightning. Gusts of 63 mph were measured in Menomonee Falls and 68 mph in Oconomowoc. Around the same time the temperature in West Bend rose from 64° to 77° in a matter of minutes. What in the world happened and why wasn’t this in the forecast?

What we experienced Tuesday night was a weather event called a "heat burst". Its set up is tricky, its execution is precise while its result seems to contradict everything we know about thunderstorms. Here’s what went down. Tuesday afternoon temperatures in Iowa shot up to the 90s with at least one triple digit temp in southern Minnesota. These scorching temperatures created a very unstable atmosphere even though dew points (moisture) were low.

Elevated thunderstorms developed with bases higher than a typical thunderstorm. Next, powerful mid and upper level winds of 50-70 mph quickly pushed the storms into southern Wisconsin. The set up for thunderstorms here was not favorable. With temperatures 25-30 degrees cooler than where the storms formed the stable air quickly cut off the rising air or updrafts the storms need to survive. Now moving over southeast Wisconsin, the decaying storms were separated from the ground by a very dry airmass. The remaining raindrops, falling from an elevated base, evaporated in the dry air below.

Since it take heat/energy to evaporate the rain the temperature of the air just below the storm dropped quickly and the cool, dense air began to plummet to earth. This set up is similar to typical thunderstorm winds with one huge difference... there wasn’t enough rain to keep cooling the air. As the cool air descended it began to warm up as higher air pressure lower in the atmosphere squeezed and compressed the airmass. However, the air continued to sink since it could not overcome its downward momentum. 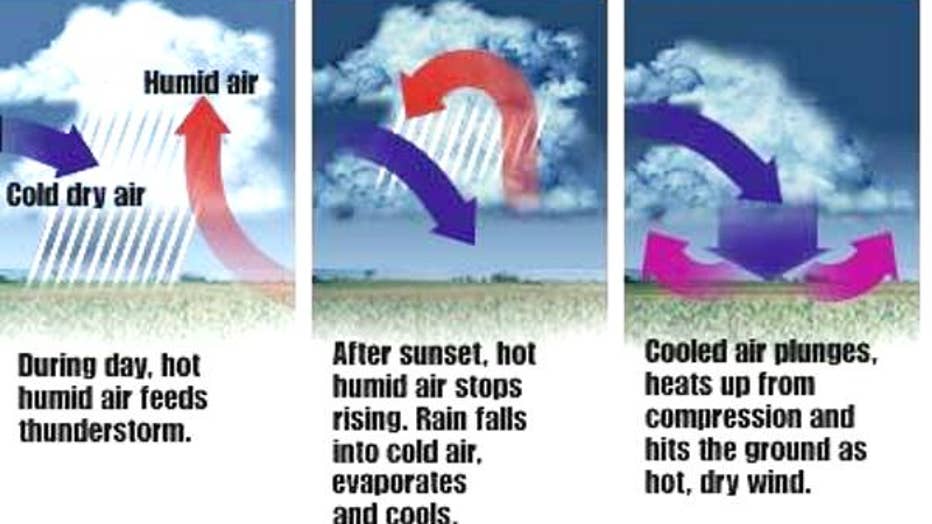 Diagram of how a heat burst develops. Credit: www.meteorologynews.com

Once the descending air hit the ground it fanned out in all directions but mainly to the east since it was already moving that way at 50-70 mph when the whole process began. The result was a sporadic pattern of damaging winds from southern Dodge Co. into western Milwaukee Co. Winds produced from decaying thunderstorms ripped down tree branches, knocked down power lines, yet only produced a few hundredths of an inch of rain (biggest total from our SMART Weather Net was 0.04” in Menomonee Falls).

Tuesday’s event was rare for our area but rather pedestrian considering what heat bursts have produced in other parts of the country. On August 3, 2008, a heat burst near Sioux Falls, SD sent temps from the low 70s soaring into the low 100s in a matter of minutes!