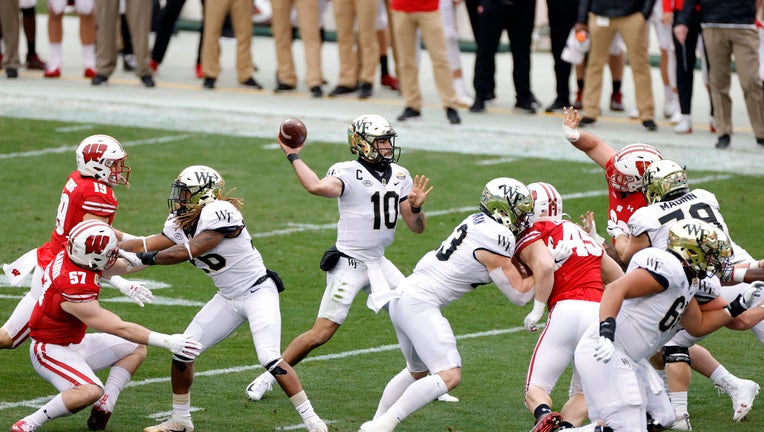 CHARLOTTE, NORTH CAROLINA - DECEMBER 30: Quarterback Sam Hartman #10 of the Wake Forest Demon Deacons looks to pass against the Wisconsin Badgers during the first quarter of the Duke's Mayo Bowl at Bank of America Stadium on December 30, 2020 in Char

Mertz, a redshirt freshman, threw for 130 yards and ran for two short touchdowns as Wisconsin (4-3) finished a rocky season on a high note.

"I'm truly proud of this group and what they have had to endure and how they did it together," Wisconsin coach Paul Chryst said. 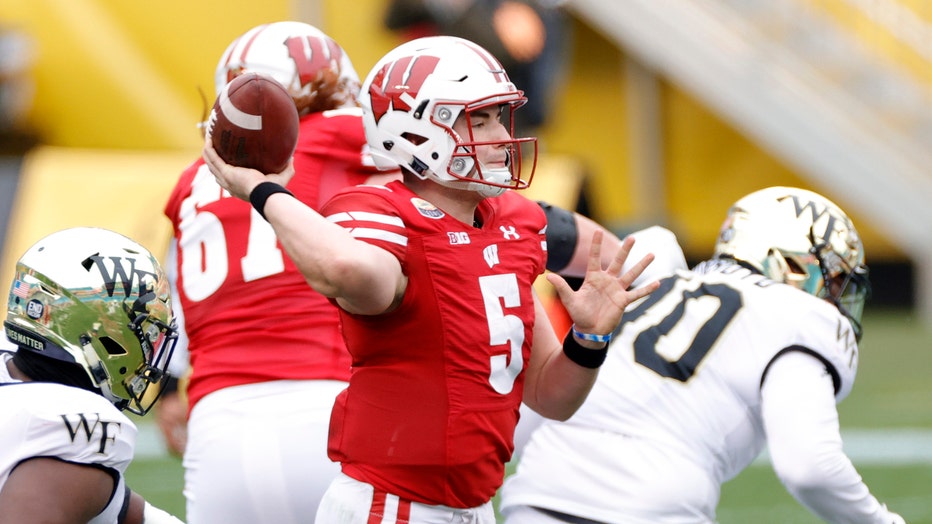 CHARLOTTE, NORTH CAROLINA - DECEMBER 30: Quarterback Graham Mertz #5 of the Wisconsin Badgers looks to pass against the Wake Forest Demon Deacons during the first half of the Duke's Mayo Bowl at Bank of America Stadium on December 30, 2020 in Charlot

With the game tied at 21 late in the third quarter, Noah Burks intercepted Wake Forest's Sam Hartman on a pass in the flat when the intended receiver failed to turn his head around. Burks returned the ball 41 yards to set up a 14-yard scoring strike from Mertz to Mason Stokke on a wheel route, giving the Badgers their first lead.

Hartman, who had thrown only one interception all season, was picked off on the next three possessions as well.

Scott Nelson had a 60-yard interception return and Collin Wilder returned a pick 72 yards to set up short TD runs that gave the Badgers a 42-21 lead, resulting in Hartman getting benched. Jack Sanborn had 11 tackles and an interception and was named MVP of the game.

"We've been facing a lot of adversity this year. ... and to finish this thing out with this group, it means the world," Sanborn said.

Hartman finished 20 of 37 passing for 318 yards with three touchdowns and four interceptions.

"All of a sudden the dam opened the floodgates and wow, I never thought we would lose a game like that," Wake Forest coach Dave Clausen said.

Clausen said he felt Hartman was telegraphing his passes.

"I think he held on to targets too long and Wisconsin broke on his eyes and his arm actions," Clausen said.

Wake Forest (4-5) outgained Wisconsin 518-266 on offense, but the Badgers had 176 return yards off interceptions.

Hartman threw three touchdown passes to Jacquarii Roberson to give the Demon Deacons a 21-14 lead early in the third quarter against the nation's No. 1-ranked defense.

The game was played in front of no fans other than family and friends due to the coronavirus pandemic.

Wake Forest: Hartman seemed to implode after playing a really nice first half. The redshirt sophomore should learn from his rough day against the Badgers.

Wisconsin: Mertz appears to have solidified his role as the team's starting quarterback moving forward. He had struggled down the stretch with five interceptions and one touchdown in his previous four games. But it's been hard to fully evaluate his play since he's been missing his two top wideouts, Danny Davis and Kendric Pryor.

Wake Forest: The Demon Deacons are slated to open their 2021 season with a Sept. 4 home game against Old Dominion.

Wisconsin: The Badgers will need to add some weapons for Mertz heading into next season. They open at home against Big Ten foe Penn State on on Sept. 4.

The Packers have clinched the NFC North title and can earn the No. 1 seed in the NFC playoffs if they win at Chicago or Seattleloses at San Francisco next week.