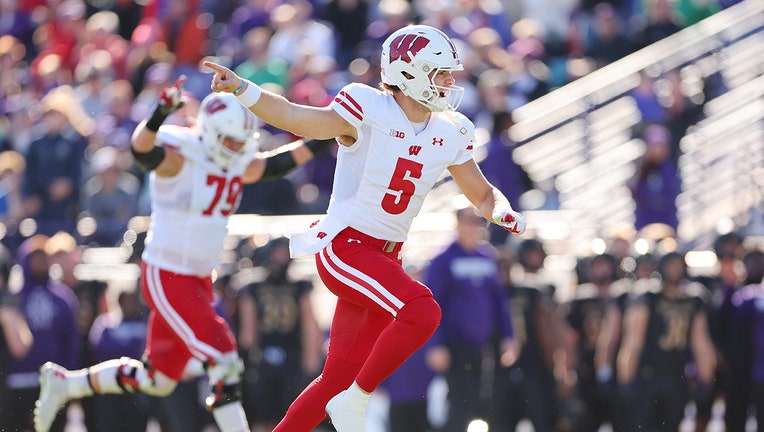 Graham Mertz celebrates a touchdown pass to Chimere Dike against the Northwestern Wildcats on Oct. 8. (Photo by Michael Reaves/Getty Images)

Braelon Allen added 135 yards rushing. He also threw a 23-yard touchdown late in the second quarter, and the Badgers (3-3, 1-2 Big Ten) raced out to a 28-0 halftime lead on the way to an easy win in their first game since coach Paul Chryst was fired.

Wisconsin decided to make a leadership change following losses to Ohio State and Illinois, led by former coach Bret Bielema, by a combined 55 points. Chryst was let go in his eighth season and replaced by Leonhard, a former All-America safety in his sixth year as defensive coordinator and seventh on staff at his alma mater.

Dike had touchdown catches of 52 and 21 yards in the first half as well as a 6-yarder in the fourth quarter. He caught 10 passes and easily surpassed his previous high of 106 yards.

Wisconsin racked up 515 yards in all and finished with 193 on the ground after being held to 2 yards rushing on 24 carries for its lowest total since 2015.

Northwestern (1-5, 1-2) lost its fifth straight since opening with a win over Nebraska in Ireland. The Wildcats are 6-16 since beating Wisconsin at home in 2020 on the way to winning the Big Ten West.

Ryan Hilinski threw for 147 yards and was intercepted twice.

The Badgers missed a field goal on the game's opening drive, but took control with touchdowns on their next two possessions.

Mertz capped a nine-play, 98-yard march when he hit a wide open Skyler Bell for a 15-yarder, and Wisconsin wasted little time adding to it.

Kamo’i Latu intercepted Hilinski near midfield. Three plays later, Dike caught a pass from Mertz over the middle to start the second quarter and outran several defenders for a 52-yard score.

Dike set up another touchdown with a 43-yard catch, this time hauling in a 21-yarder from Mertz midway through the quarter to bump the lead to 21-0. Allen threw a 23-yard TD to Chez Mellusi with just over two minutes left in the half to make it a 28-point game.

Northwestern had a chance to score just before the break, only to come away empty-handed when Jack Olsen missed a 21-yarder on his first attempt this season as time expired.

The Wildcats converted a fourth-and-1 at the 4 in the final minute and threw two incompletions before coach Pat Fitzgerald opted to go for the field goal with two seconds remaining and the ball on the 3. Fans booed and they weren't happy, either, when the kick went wide left.

Wisconsin defensive back Cedric Dort stayed motionless for several minutes after breaking up a pass early in the third. He eventually sat up and teammates surrounded him before he was carted off the field.

Wisconsin: The Badgers got the easy win they needed to cap a tumultuous week that began with their coach being fired.