MILWAUKEE -- For four decades, they've been in tune with each other, and the "Free Beer Quartet" came together again for one final performance.

Shaking off any rust that might have accumulated, the old friends still hit all the notes.

"This is a song that we've sung for 30 years," said Brad Martin.

Martin, Pat Lynch, Scott Grunseth, and Mike Bonn first got together in 1983 while at Mt. Senario College in Ladysmith, Wisconsin.

"That was the beginning of the brotherhood," said Martin.

Performing without a name, their reputation would soon change that. Bonn, the baritone, remembered it like it was yesterday.

"Of course, we sang for free beer in college," said Bonn. "Somebody finally asked, 'What's the name of your group?' We looked at our seven-ounce glasses. We said, 'Free Beer.'" 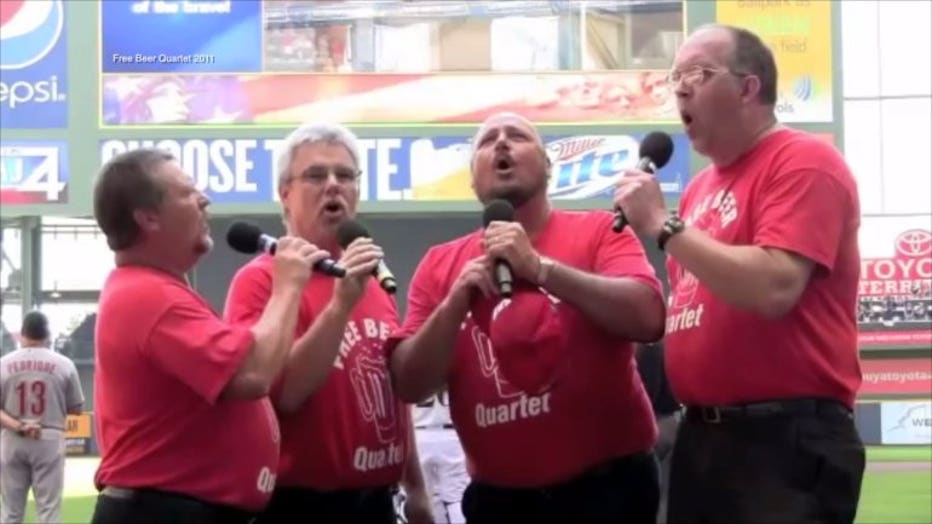 The Free Beer Quartet, a perfect name for a group from Wisconsin, went from the bars to the radio, and even to national television in 2010.

"We got sent out to California for 'America's Got Talent,'" said Grunseth.

That same year, they performed at Miller Park for the first time.

"Bob Uecker had said something on the air, said, 'Wow that was a good rendition of the national anthem,' and he rarely says that about any group or any soloist," said Bonn. "So we felt honored, and then we got the call again three more times after that."

Nine years later, they returned for a fifth time.

"This has to be the penultimate one," said Lynch. "It's got to be the biggest and the best."

It was most likely their final appearance -- making this performance the most emotional yet.

"I actually did tear up and it's kind of bittersweet," said Martin. 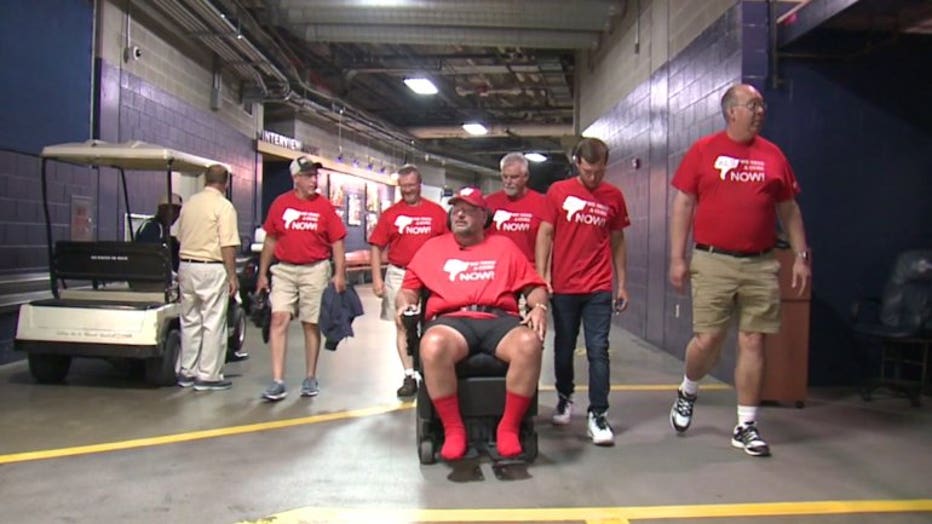 A year prior, Bonn was diagnosed with ALS. 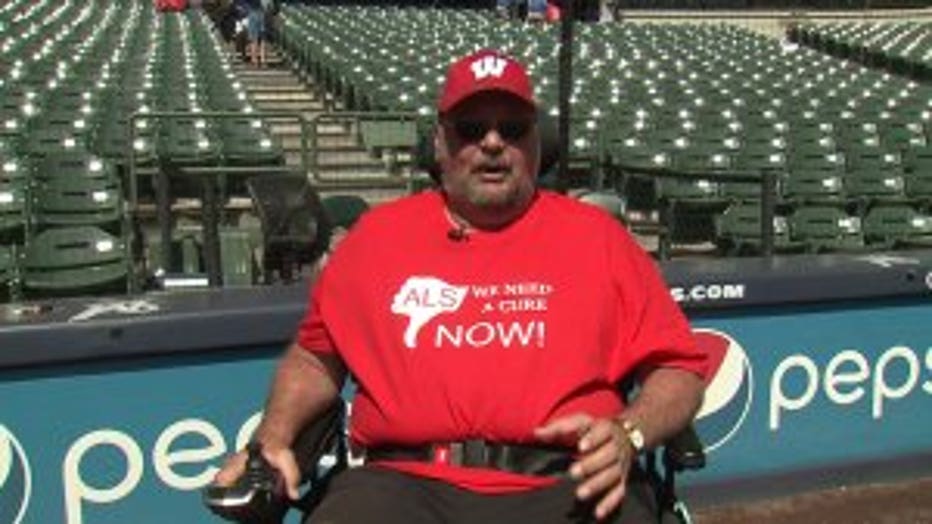 "Last year at this time, I was scooting around in a scooter, using a walker, and I was still able to get around that way, but a year makes a total, a big difference, and now, I'm not able to stand by myself or walk or anything," said Bonn.

Martin contacted the Milwaukee Brewers, along with Lynch and Grunseth to get one last call for the Free Beer Quartet.

"It was really important when we put this together that it would be all about Mike," said Martin. "Each time he gets to do something right now really brings his spirits up. I think those are the things that he has to live for right now, and just being a part of that is really special."

"It means the world to me," said Lynch. "I've, Mike has been my best friend all my life. Best man at my wedding, so to support him is just, it means so much."

They also sent a message which was clearly written on their shirts. 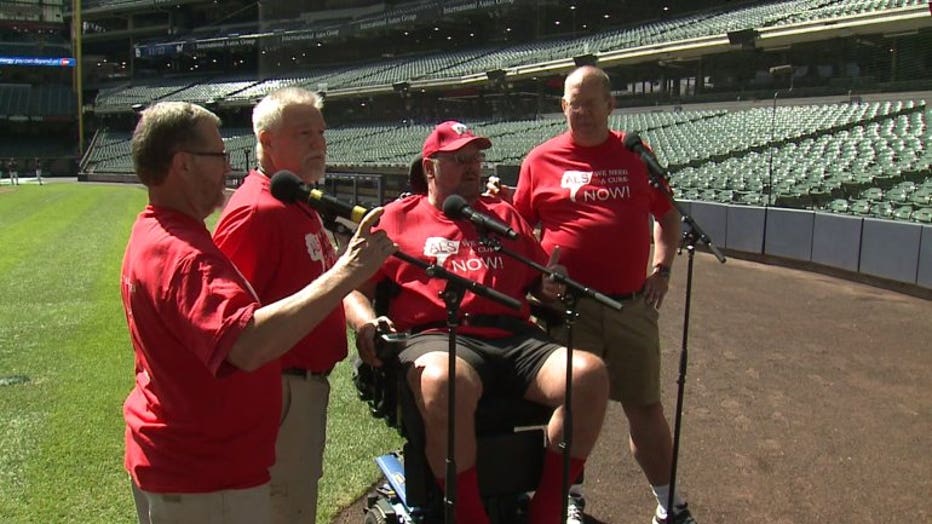 "Enough is enough," said Bonn. "Why don't we get a handle on this and do something about it so people don't need to suffer as much, or be able to cure the disease itself? Wouldn't that be awesome? I'd love nothing more than to stand up, do a lap around Miller Park."

While the reason for their moment in the sun was a somber one, Bonn and his brothers saw it in a much different way.

"It makes me want to keep going," said Bonn." It makes me not want to stop. You know, they say, 'Last call.' Maybe last call for the Brewers, but maybe we can get some more recordings in before I lose too much. I'd love to, because these guys, I tell you, we have so much fun." 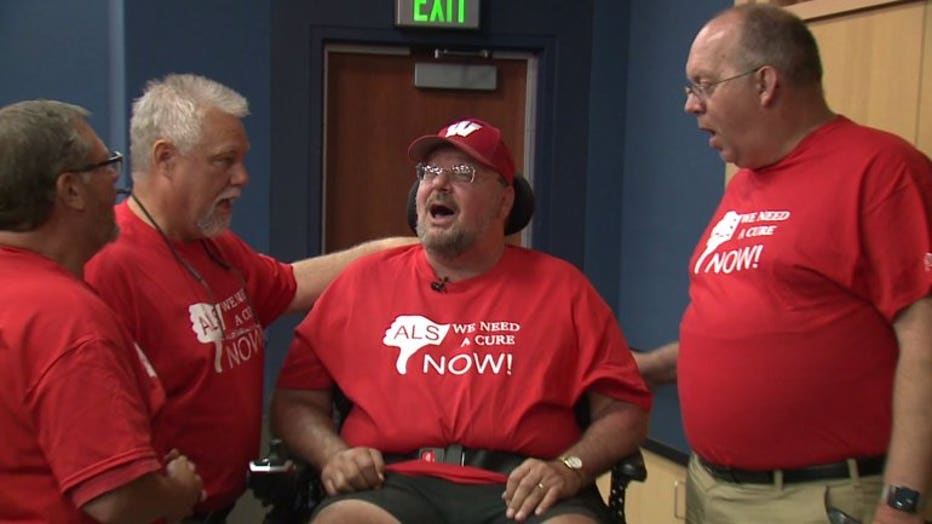 "Knowing it's our last it's just, it's like writing the final chapter to a fantastic movie or fantastic book," said Grunseth.

The Free Beer Quartet made some more recordings in 2019, including some jingles for radio spots in Ladysmith. They said they were hopeful they'd get the opportunity to make more.