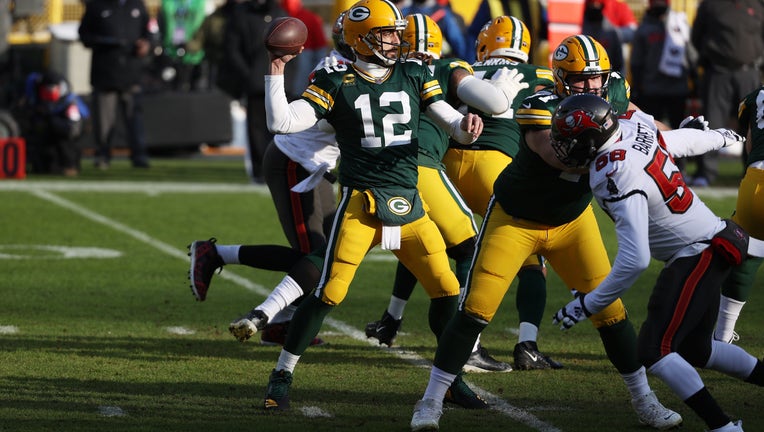 Aaron Rodgers #12 of the Green Bay Packers looks to pass against the Tampa Bay Buccaneers in the first quarter during the NFC Championship game at Lambeau Field on Jan. 24, 2021 in Green Bay, Wisconsin. (Photo by Dylan Buell/Getty Images)

GREEN BAY, Wis. - Tom Brady and the Tampa Bay Buccaneers’ road magic have them heading home to the Super Bowl, the first team to play in one on their home field.

Brady owns six Super Bowl rings with New England and now heads to his 10th NFL championship game with his new team. With help from a stifling pass rush led by Shaquil Barrett and Jason Pierre-Paul combining for five sacks and a curious late call by the Green Bay Packers, Brady and the Bucs beat top-seeded Green Bay 31-26 for the NFC title Sunday, Jan. 24. 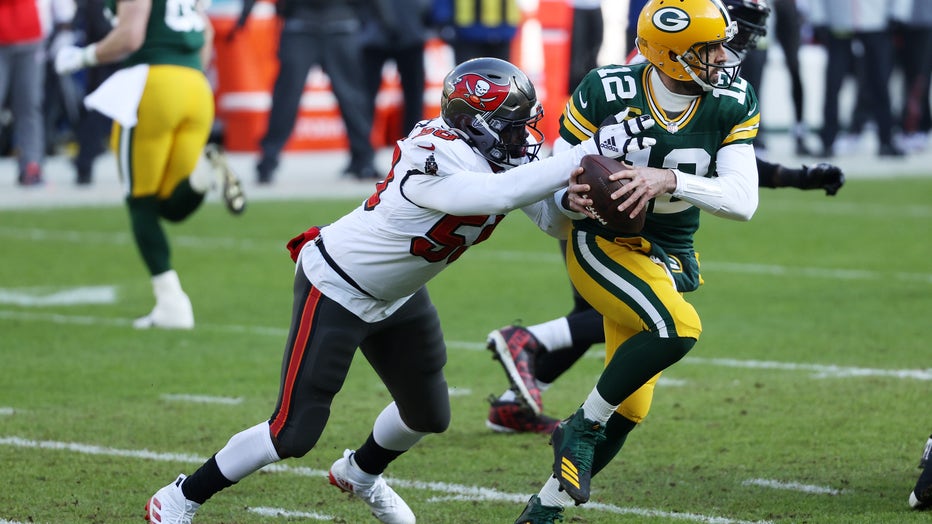 Aaron Rodgers #12 of the Green Bay Packers tries to avoid the tackle of Shaquil Barrett #58 of the Tampa Bay Buccaneers in the first quarter during the NFC Championship game at Lambeau Field on Jan. 24, 2021 in Green Bay, Wisconsin. (Photo by Dylan B

The Bucs (14-5) earned their franchise-record eighth consecutive road victory to reach the Super Bowl for the first time since their 2002 championship season.

They were helped by a strange decision by Packers coach Matt LaFleur with just over two minutes remaining and down by five points. On fourth-and-goal, he elected to kick a field goal. Tampa Bay then ran out the clock on the Packers (14-4).

The Bucs (14-5) will face either the Kansas City Chiefs or Buffalo Bills at Tampa’s Raymond James Stadium on Feb. 7.

The Bucs trounced the Packers 38-10 in Tampa on Oct. 18, and Aaron Rodgers and Brady understood all eyes would be on them Sunday.

Tampa Bay was the first to score with a touchdown pass to WR Mike Evans. The extra point brought the score to 7-0 with about 11 minutes left in the first quarter.

As the second quarter got underway, Packers QB Aaron Rodgers launched a pass down the field to Marques Valdez-Scantling, who then ran the ball in for the touchdown. Mason Crosby's 50-yard extra point tied the game with 14 minutes left in the first half.

Tampa Bay running back Leonard Fournette ran the ball into the end zone for a touchdown with about 12:30 left in the second quarter. The extra point put the Buccaneers back on top, 14-7.

A 24-yard Mason Crosby field goal cut the Buccaneers' lead to 14-10 with under 5 minutes remaining in the first half. 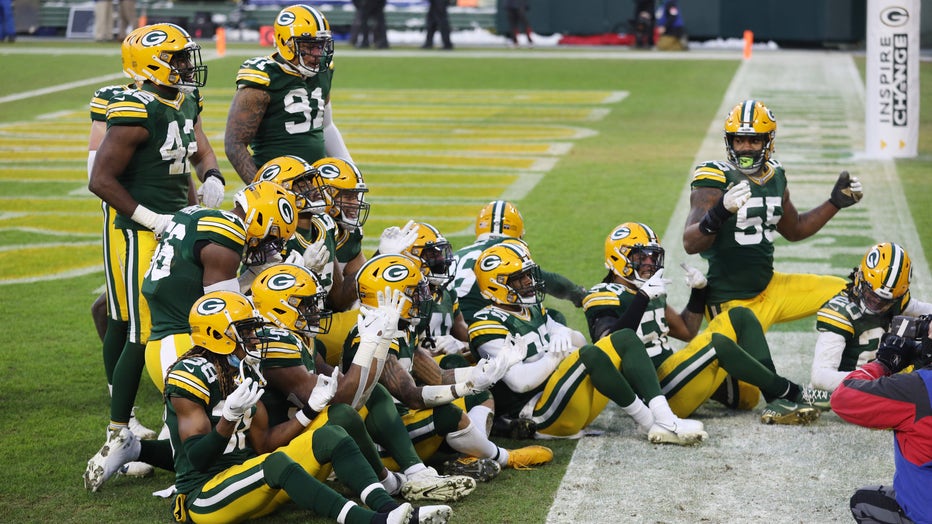 Jaire Alexander #23 of the Green Bay Packers celebrates with teammates after his interception in the fourth quarter against the Tampa Bay Buccaneers during the NFC Championship game at Lambeau Field on Jan. 24, 2021 in Green Bay, Wisconsin. (Photo by

It became an 11-point game with one second remaining in the first half when the Buccaneers scored a touchdown, with a pass from Tom Brady to WR Scott Miller. Tampa Bay leads 21-10.

A touchdown catch by Cameron Brate extended Tampa Bay's lead to 28-10 with under 14 minutes left in the third quarter.

Packers QB Aaron Rodgers hit Robert Tonyan for a touchdown, and Mason Crosby's extra point cut the Buccaneers' lead to 28-17 with under 10 minutes left in the third quarter.

A touchdown pass from Rodgers to Davante Adams made this a five-point game at the end of the third quarter. 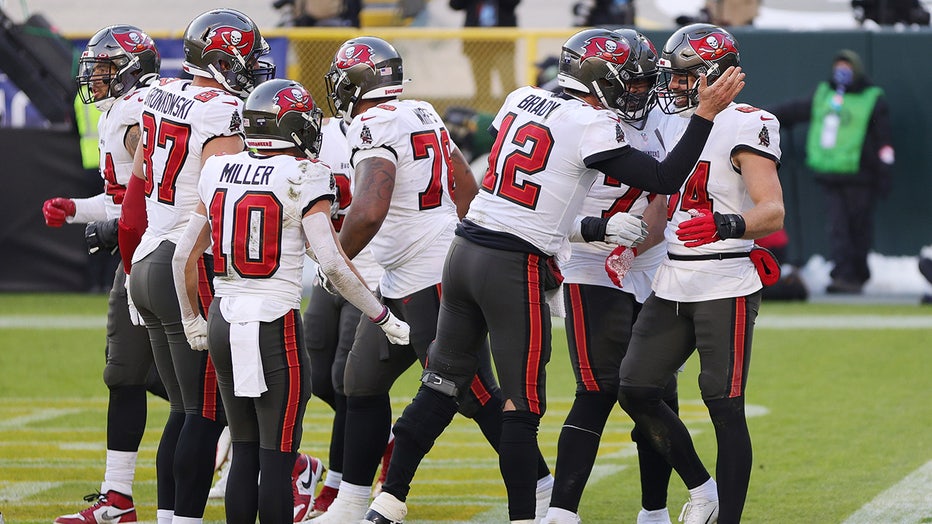 Tom Brady #12 celebrates with Cameron Brate #84 of the Tampa Bay Buccaneers after Brate scored a touchdown in the third quarter against the Green Bay Packers during the NFC Championship game at Lambeau Field on Jan. 24, 2021 in Green Bay, Wisconsin.

A 46-yard Tampa Bay field goal extended the Buccaneers' lead to 31-23 with under 5 minutes left in the game.

Mason Crosby's 26-yard field goal made this a five-point game again, with just over 2 minutes remaining; the final 31-26.