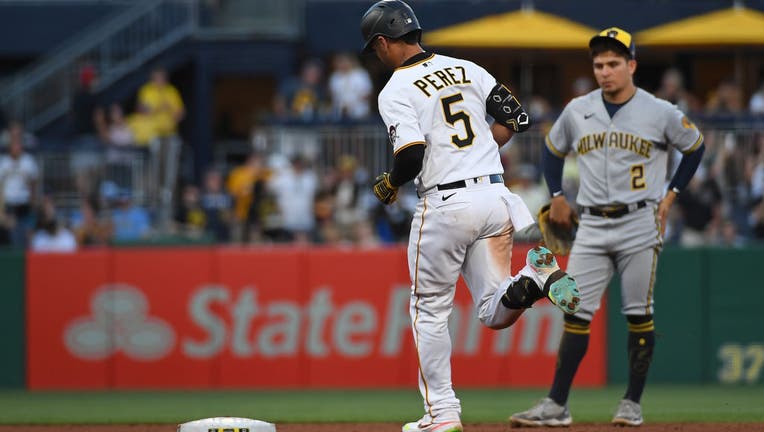 Michael Perez #5 of the Pittsburgh Pirates rounds the bases after hitting a two run home run in the fourth inning during the game against the Milwaukee Brewers at PNC Park on June 30, 2022, in Pittsburgh, Pennsylvania. (Photo by Justin Berl/Getty Ima

It was the first multi-homer game of Perez’s five-year career. He also doubled his season home run total.

Perez hit a two-run blast in the fourth inning off Brent Suter (1-2) to break a 3-3 tie. The backup catcher added another two-run homer in the sixth to make it 6-4 before connecting again for a solo shot in the eighth to increase the lead to 8-4.

The outburst came one day after the Pirates’ Bryan Reynolds had a three-homer game in a win at Washington.

Perez went 4 for 5 to set a career-high for hits and raise his batting average to .169. He finished with five RBIs as the Pirates ended their eight-game losing streak against Milwaukee that dated to last season.

The Brewers scored three runs in the ninth inning to pull to 8-7. Willy Adames hit an RBI double, Rowdy Tellez drove in a run with a ground out and Kolten Wong hit a two-out run-scoring single off diving first baseman Michael Chavis.

Rookie Yerry De Los Santos then relieved closer David Bednar with runners on first and third and retired Luis Urias on a pop fly for his second career save, both coming in the last two days.

Cruz and Suwinski homered in the second inning to put the Pirates ahead 3-0. They became the first Pittsburgh rookies to go back-to-back since Brandon Moss and Andy LaRoche in 2008.

Pittsburgh finished June with 44 homers, its most in a calendar month since 2007.

Andrew McCutchen had two doubles among his three hits while driving in two runs but couldn’t keep the NL Central-leading Brewers’ four-game winning streak from ending. The 2013 NL MVP is hitting .350 in his last 22 games following a 1-for-40 slide.

Brewers starter Adrian Houser left the game with right elbow tightness in the third inning. He was charged with three runs in 2 1/3 innings.

After walking Daniel Vogelbach with one out, Houser was visited on the mound by manager Craig Counsell and an athletic trainer. Houser then left following a brief conversation and was relieved by Suter.

After the Pirates went ahead 3-0 on the back-to-back homers off Houser, the Brewers rallied to tie the score. Yelich tripled home a run and scored on Adames’ groundout in the third inning and Omar Narvaez hit an RBI double in the fourth.

Perez’s first homer put the Pirates ahead for good and his second, which came off Jason Alexander, gave them cushion after Luis Urias’ groundout in the sixth got the Brewers within a run. Perez then put the capper on his big game by connecting against Jandel Gustave.

All three home runs carried into the right-field stands.