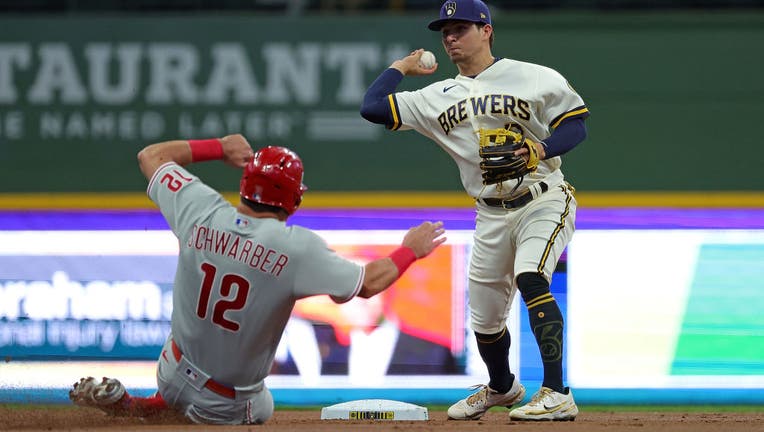 MILWAUKEE, WISCONSIN - JUNE 08: Kyle Schwarber #12 of the Philadelphia Phillies is forced out at second base as Luis Urias #2 of the Milwaukee Brewers makes a throw to first base to turn a double play during the first inning at American Family Field

The Phillies won their season-high sixth in a row, five of them since interim manager Rob Thomson took over when Joe Girardi was fired on Friday.

The NL Central-leading Brewers have lost a season-worst five straight. Milwaukee has scored a total of six runs during its skid and been shut out three times.

Stott and Hoskins hit two-run homers in the third off starter Adrian Houser (3-6) to stake the Phillies to a 4-0 lead.

Herrera added a solo drive in the fifth off Houser, who had given up only three home runs over 51 1/3 innings in his 10 previous starts.

Harper hit a three-run homer off Luke Barker in the ninth. The Phillies have scored six or more runs in five of their six consecutive wins.

The Brewers got a runner past first base only once, when Christian Yelich singled and stole second in the sixth. Nola ended that threat by striking out Luis Urías.