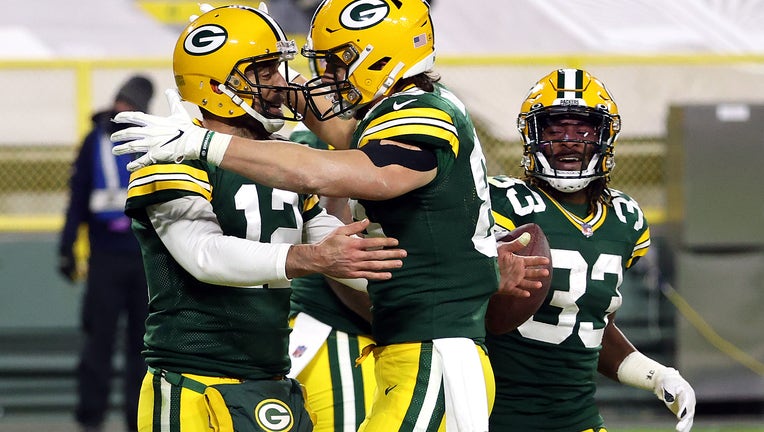 GREEN BAY, Wis. - The Green Bay Packers extended their lead in the NFC North with a 41-25 win over the rival Chicago Bears on Sunday night, Nov. 29 in the first of two regular-season matchups between the NFC North's top two teams. It was Green Bay's 100th win over Chicago.

The Packers came into Sunday's game with a two-game lead over the Bears.

The rivals meet again at Chicago on Jan. 3 to close the regular season. The Bears and Packers faced off for the first time in 1921, making this the NFL’s oldest rivalry.

Both teams went into Sunday's matchup struggling a bit after fast starts -- the Bears lost four straight after winning five of their first six games. The Packers won their first four games but went 3-3 after that.

Bears QB Mitchell Trubisky got the start after Nick Foles injured his hip and glute in the Nov. 16 loss to the Minnesota Vikings. Trubisky had started the Bears' first three games this season before being benched in favor of Foles.

While Lambeau Field is still closed on game days to ticketed fans, a small group of Packers employees and their household family was allowed in the stadium bowl "to help evaluate COVID-19 protocols that have been implemented," the Packers announced.

In a news release, Packers officials said: "The team is hopeful that hosting ticketed fans will be possible in the coming weeks, so the small group invited to Sunday’s game will be part of the process of evaluating the enhanced protocols for fan attendance. The invited guests – approximately 500 – will model operations such as ingress and egress, concession stand and restroom usage, signage effectiveness and positioning, and distancing of seating pods throughout the stadium bowl."

The Packers were the first on the board with a touchdown pass from QB Aaron Rodgers to WR Davante Adams in Green Bay's opening drive -- his sixth game in a row with a TD.

Mason Crosby ended up missing the extra point, and Green Bay led Chicago 6-0 with just over 7 minutes left in the first quarter.

The Bears cut the Packers' lead with a field goal, bringing the score to 6-3.

The Packers started the second quarter with a touchdown pass from Rodgers to TE Marcedes Lewis -- his third TD catch of the year. Crosby's successful extra point extended the Packers' lead to 13-3.

We saw a Lambeau Leap from WR Allen Lazard with under 5 minutes left in the first half after a touchdown pass from Rodgers. Crosby's extra point brought the score to 20-3.

The Bears scored a touchdown just before halftime, cutting the Packers' lead to 27-10.

Green Bay's first touchdown of the second half came with less than 7 minutes remaining in the third quarter -- with a long pass down the field from Rodgers to TE Robert Tonyan, his seventh TD reception of the season. Crosby's extra point put the Packers up over the Bears 34-10.

Packers RB Jamaal Williams scored his second rushing touchdown of the year just before the end of the third quarter, bringing the score to Green Bay 41, Chicago 10. 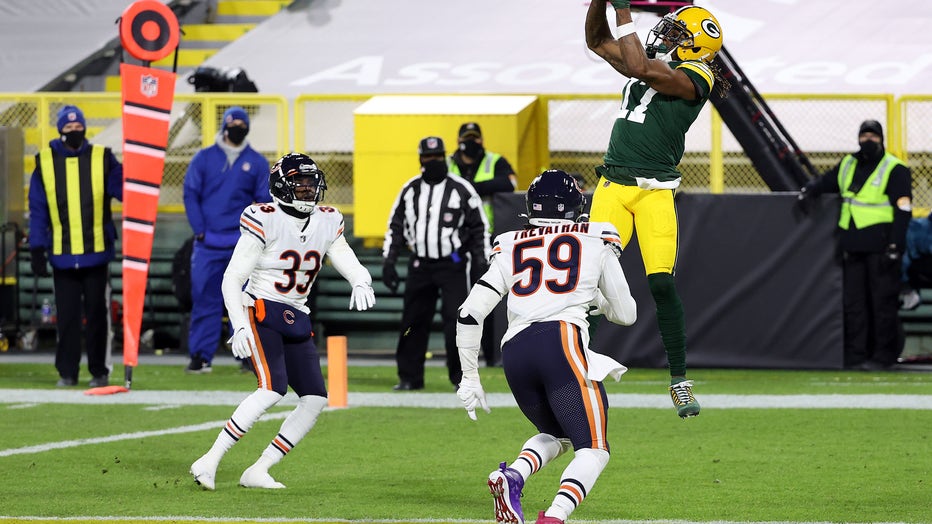 The Chicago Bears scored their first touchdown of the second half early in the fourth quarter, bringing the score to 41-17.

Then, Bears RB David Montgomery took the ball into the end zone for the touchdown -- followed by a two-point conversion, with Chicago bringing the score to 41-25 with under 3:30 left in the game. 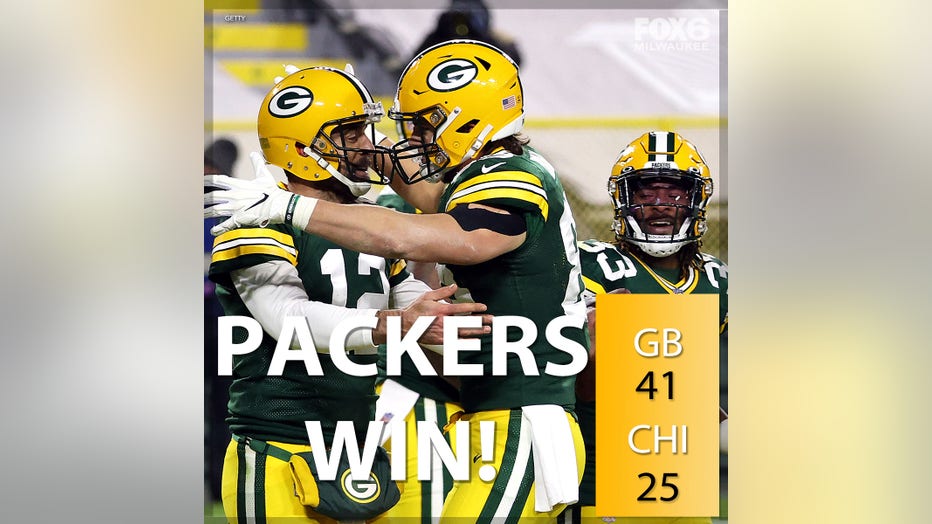 That was the final score -- with the Green Bay Packers 8-3 on the season. Aaron Rodgers passed 50,000 career passing yards -- a milestone the QB said "feels good" in the moments after the team's win.