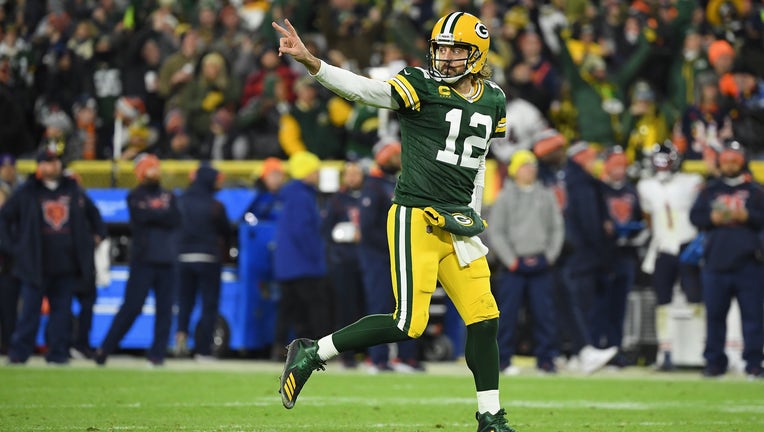 GREEN BAY, WISCONSIN - DECEMBER 12: Aaron Rodgers #12 of the Green Bay Packers reacts after a touchdown pass during the third quarter of the NFL game against the Chicago Bears at Lambeau Field on December 12, 2021 in Green Bay, Wisconsin. (Photo by Q

GREEN BAY, Wis. - Aaron Rodgers threw for 341 yards and four touchdowns to continue his mastery of the NFL’s oldest rivalry as the Green Bay Packers beat the Chicago Bears 45-30 on Sunday night.

The Packers scored the first 24 points of the second half to erase a 27-21 halftime deficit.

Green Bay (10-3) took a four-game lead over the Minnesota Vikings in the NFC North and moved closer to its third straight division title. Chicago (4-9) has lost seven of eight.

Rodgers went 29 of 37, throwing two TD passes to Davante Adams and one each to Allen Lazard and Aaron Jones. Rodgers has 61 career touchdown passes against the Bears, the most all-time against Chicago and one more than his predecessor, Brett Favre.

The Packers are 23-5 against the Bears in games Rodgers had started. Rodgers yelled, "I still own you!" to the Soldier Field crowd after his fourth-quarter touchdown run in a 24-14 victory on Oct. 17.

Chicago tried to deliver some payback Sunday and led after a wild second quarter that featured a combined 45 points.

But the Bears couldn’t keep it up. 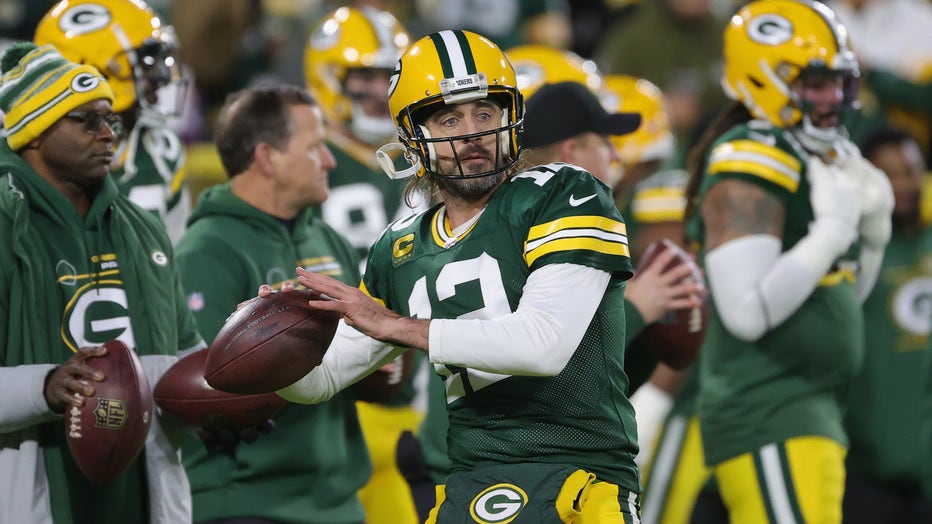 GREEN BAY, WISCONSIN - DECEMBER 12: Aaron Rodgers #12 of the Green Bay Packers warms up before the NFL game against the Chicago Bears at Lambeau Field on December 12, 2021 in Green Bay, Wisconsin. (Photo by Stacy Revere/Getty Images)

Chicago's Justin Fields went 18 of 33 for 224 yards with two touchdown passes, but he also threw two interceptions and lost a fumble. Jakeem Grant scored twice, including a 97-yard punt return.

Jones scored a pair of touchdowns less than a minute apart to put the Packers ahead for good.

He capped the opening drive of the second half with a 3-yard run that gave Green Bay a 28-27 lead. On the Bears’ next series, Preston Smith sacked Justin Fields and forced a fumble that Rashan Gary recovered at Chicago’s 23-yard line.

On the next play, Jones caught a pass from Rodgers at about the 13 and ran into the left corner of the end zone to make it 35-27.

The Bears took a 10-0 lead in the first 20 minutes as Grant set up a field goal with a 34-yard punt return, then caught a flip pass in the backfield and turned it into a 46-yard touchdown.

The scoring really picked up after that. 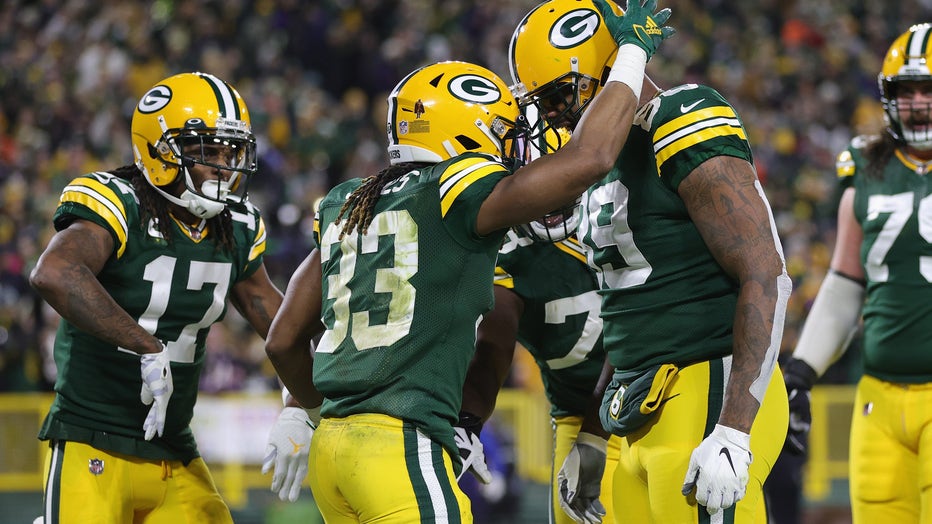 GREEN BAY, WISCONSIN - DECEMBER 12: Aaron Jones #33 of the Green Bay Packers celebrates with Marcedes Lewis #89 after scoring a three-yard rushing touchdown against the Chicago Bears during the third quarter of the NFL game at Lambeau Field on Decemb

The teams combined to score five touchdowns in a span of 5:18 as the lead changed hands twice.

Chicago's touchdowns came on a 56-yard completion from Fields to Damiere Byrd and Grant's punt return.

Douglas joined Hall of Famer Herb Adderley as the only Packers to score on interception returns in back-to-back games. Grant’s punt return was the longest for any Bears player since at least 1960, which is as far back as the team’s data on that statistic goes.

Cairo Santos’ 44-yard field goal closed the first half and put the Bears ahead 27-21. It was the fourth time since 1991 that teams have combined to score at least 45 points in a quarter.

The Bears were the first to get on the board as play got underway at Lambeau Field Sunday night, with a field goal with under 5 minutes left in the first quarter, making it 3-0.

Bears' Jakeem Grant scored a 46-yard touchdown to extend Chicago's lead to 10-0 early in the second.

A 2-yard pass from Aaron Rodgers to Allan Lazard on 4th and goal cut the Bears' lead to 10-7 with about 6 minutes left in the half.

A 55-yard pick-six for a TD by Rasul Douglas put the Packers up 14-10 with about 5 minutes left in the second quarter.

It didn't take long for the Bears to answer. Damiere Byrd ran for 54 yards to bring the score to 17-14 with just over 3 minutes left in the half.

The first punt return for a touchdown in the NFL this season came courtesy of the Bears just before halftime, bringing the score to 24-14.

With a 38-yard pass from Aaron Rodgers to Davante Adams, the Packers cut the Bears' lead to 24-21, making it a 3-point ballgame with less than 50 seconds left in the half.

The Packers got back on top early in the third with an Aaron Jones touchdown, bringing the score to 28-27.

A Packers' fumble recovery led to another Aaron Jones touchdown, putting the Packers up 35-27.

Mason Crosby extended the Packers' lead with a 20-yard field goal with under 3 minutes left in the third, bringing the score to 38-27.

A pass from Aaron Rodgers to Davante Adams put the Packers up 45-27 with under 5 minutes left in the game.

The Bears added a field goal with under 2 minutes remaining in the game to bring the score to 45-30.

The Noel Light Park and Market at Wisconsin State Fair Park is an indoor option for enjoying Christmas lights this season.