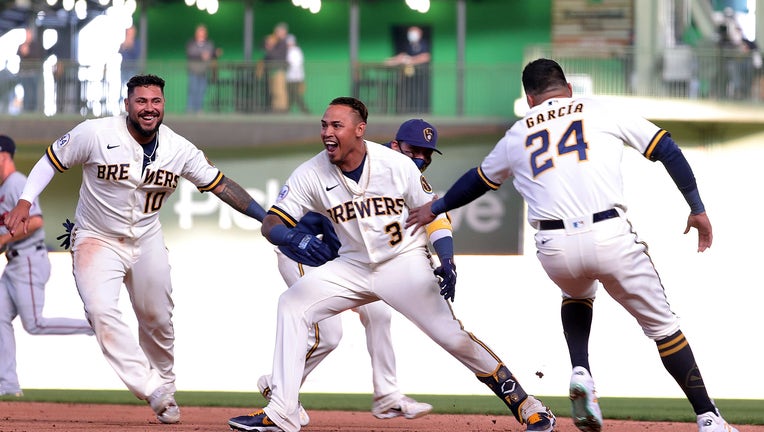 Orlando Arcia (center) celebrates with teammates after driving in the game-winning run during the tenth inning against the Minnesota Twins on Opening Day at American Family Field on April 01, 2021. (Photo by Stacy Revere/Getty Images)

MILWAUKEE - The Milwaukee Brewers on Tuesday, April 6 announced that shortstop Orlando Arcia has been traded to the Atlanta Braves in exchange for two pitchers.

Coming to Milwaukee in the trade will be Chad Sobotka and Patrick Weigel. Arcia, 26, had spent his entire six-year career with the Brewers.

Arcia played 542 games for Milwaukee, amassing a .244 career batting average, 42 home runs and 180 RBI. He was the team's primary shortstop each of the past four seasons, which include three straight playoff appearances from 2018-2020.

Weigel, 26, has appeared in one MLB game. He threw two-thirds of an inning for Atlanta last season, giving up two hits, three walks and two earned runs.

The Milwaukee Brewers teamed up with the City of Milwaukee to talk about the importance of the COVID-19 vaccine.

Barry Alvarez to retire as UW Athletics Director on June 30

After 32 years at the University of Wisconsin, including the final 18 as the Director of Athletics, Barry Alvarez announced on Tuesday, April 6 that he will officially retire on June 30.