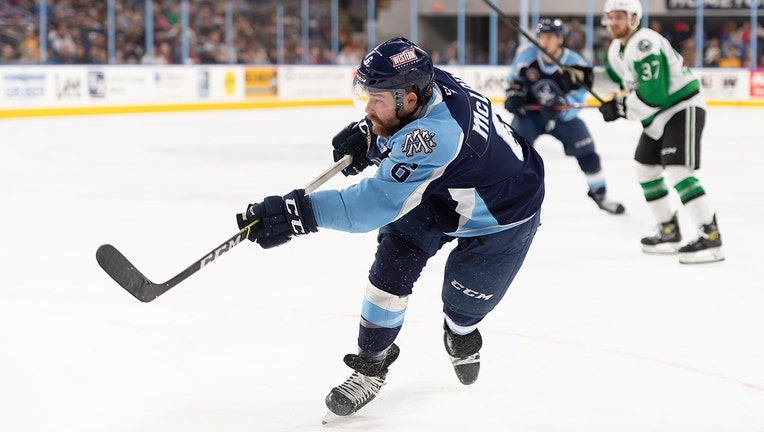 MILWAUKEE - Tommy Novak scored the game-winning goal on the power play with 4:25 to play in regulation, while Jimmy Huntington scored a pair of goals as the Milwaukee Admirals took a 4-3 win over the Texas Stars on Saturday night at UW-Milwaukee Panther Arena.

Connor Ingram stopped 27 shots in goal to pick up his 25th win of the season, which is the second most in the AHL. In addition to Huntington, Cody Glass and Marc Del Gaizo each added a pair of assists and Egor Afanasyev chipped in a goal an assist to pace the Ads offense.

Afanasyev got the Ads on the board on an impressive individual effort at the 8:17 mark of the first period. Afanasyev took a pass from Dylan Blujus at the goal line near the right boards. He carried the puck around the net on his backhand, faked like he was going to try to jam in it then floated out to the left faceoff dot where he turned and fired a wrister by Texas goalie Matt Jurusik.

The Admirals pushed their lead to 2-0 just under five minutes later on Jimmy Huntington’s second goal of the season with the Ads. Marc Del Gaizo held the puck below the Texas goal line and threaded a pass through traffic to a crashing Huntington, who went down to one knee to convert the goal.

However, the Stars would battle back and level the score at two with a pair of goals in the second period. Curtis McKenzie scored the first on a power play tally 54 seconds into the sandwich frame and Tanner Kero lit the lamp with 2:44 left in the period.

Texas took a 3-2 lead with their second power play goal of the night at the 3:14 mark of the third period when Ty Dellandrea jammed a loose puck past Ingram.

Huntington tied the score on his second of the night at 6:45 of the third. His shot from the right faceoff dot went five-hole on Jurusik, who was dealing with a Graham Knott running interference in front of the net.

That set the stage for Novak’s game-winner on his fourth tally of the year.  With the Admirals on their third power play of the night, Cody Glass raced the puck down the right wall, pulling multiple defenders his way before sending a cross-ice pass to Novak at the top of the far circle. Novak skated in until he was below the dot and fired a wrister by over Jurusik’s shoulder to give the Ads a lead they would not relinquish.

The Admirals will look for their second win in as many days when they kick off a four-game roadtrip Sunday afternoon in Rockford at 4 p.m. against the IceHogs. The Ads' next home game will be on Friday, April 1 when they host the Chicago Wolves at 7 p.m.

The NCAA Tournament continues at Fiserv Forum. There has been a lot of Badgers red, but fans from across the country enjoying the experience.