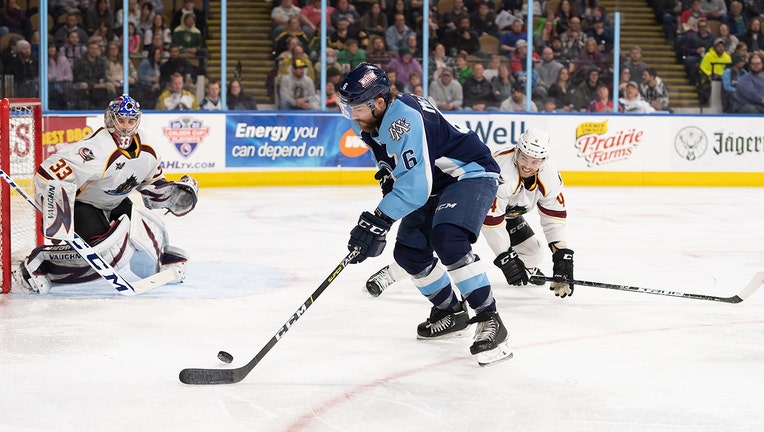 MILWAUKEE - The Milwaukee Admirals received goals from four different players as they took a 4-1 victory over the Cleveland Monsters on Saturday night at UW-Milwaukee Panther Arena.

The win lowered the Admirals' magic number to seven to earn a berth in the Calder Cup Playoffs.

Cody Glass continued his torrid offensive pace with a pair of assists to give him four multi-point games in his past six, and 16 points (4g-12a) in his past 12 contests. Jimmy Huntington (1g-1a), Cole Schneider (1g-1a), and Egor Afanasyev (2a) also posted multi-point efforts as the Ads closed our a four-game homestand with six of eight points.

Devin Cooley stopped 21 of the 22 shots he faced to pick up his eighth win of the season in net.

For the second straight night, the Admirals; offense got off to a quick start, scoring a pair of goals 5:38 into the game. The first came from Cole Smith just 2:27 into the game when he corralled the puck off the end boards of a Huntington shot and slipped it five-hole through the legs of Cleveland goalie Cam Johnson.

The Monsters would cut the Ads' lead in half, however, as Cole Cassels tallied on the power-play at the 11:38 mark of the opening frame.

Cleveland looked to have some good momentum midway through the second. The Ads' Matt Tennyson and Joseph LaBate were called for penalties at the same time giving the Monsters two full minutes of 5-on-3, which was followed by another two minutes for a tripping call on Cole Schneider.

However, the Admirals' penalty kill unit was up the challenge and allowed only two shots in that four-minute timeframe.

Shortly thereafter, Glass fed a crashing Huntington, and he buried a shot over the shoulder of Johnson to push the Milwaukee lead to 3-1. Mitch McLain redirected a Cole Schneider shot with 1:32 to play in the sandwich frame for his second in as many nights and 17th of the season.

The win also marked the 10th win at home in their past 13 games.

The Admirals are off now until next Wednesday when they will make the trip to Des Moines to take on the Wild at 7 p.m. Milwaukee’s next home game will be next Saturday night, April 16 when the team hosts Iowa at 6 p.m.

A ceremonial groundbreaking was held Friday for MSOE Raiders Softball Stadium at the northeast corner of Milwaukee and State Streets.

The Milwaukee Brewers were shut out by the Chicago Cubs. After Andrew McCutchen was hit by a pitch in the eighth inning, the benches cleared.