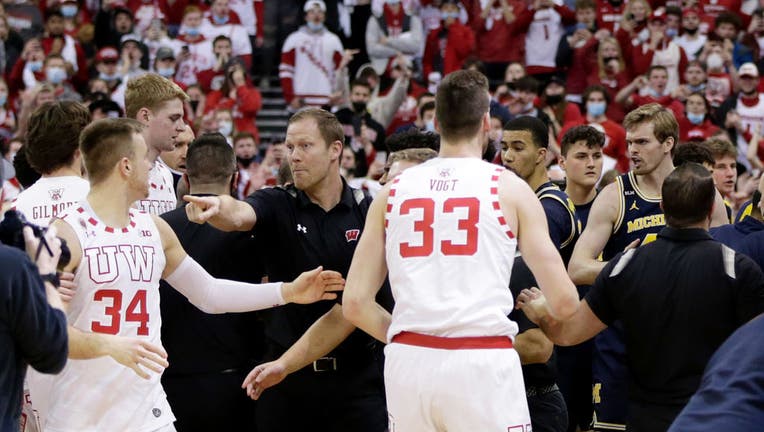 It was unclear what upset Howard, but Wisconsin was up 15 when it took a timeout with 15 seconds left.

After the game, Howard pointed a finger at Gard. Later on, Howard appeared to take a swing toward Wisconsin assistant Joe Krabbenhoft, and players from each side got involved in the skirmish.

Wisconsin outscored Michigan 44-25 over the last 18 1/2 minutes. Steven Crowl’s 3-pointer with 16:06 remaining put the Badgers ahead for good and highlighted a 14-1 spurt.

Davis took over from there.

The national player of the year candidate went on a personal 9-0 run and blocked a shot in a span of 2 minutes, 12 seconds to give the Badgers a 56-41 lead. That stretch included a spectacular drive into the lane in which Davis scored with his left hand and drew contact to set up a three-point play.

Michigan (14-11, 8-7) scored five straight points to get the margin down to 10, but Davis answered with a jumper and teammate Brad Davison followed with a 3-pointer.

Hunter Dickinson scored 21 points for Michigan, which shot just 4 of 25 from 3-point range. Eli Brook had 14 and DeVante’ Jones added 11.

The Republican-controlled Wisconsin Legislature was prepared to pass a package of fast-tracked bills this week that would make it more difficult to vote in the presidential battleground state, election year measures that are all but certain to be vetoed by Democratic Gov. Tony Evers.

A report of shots fired shut down I-43 westbound near Forest Home Avenue Sunday afternoon.