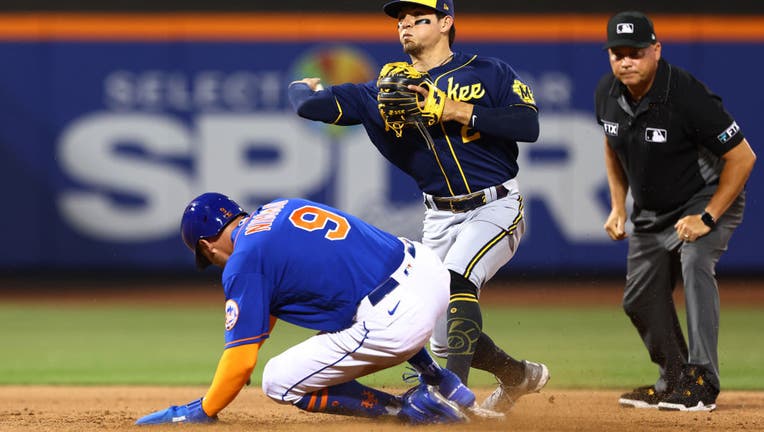 Second baseman Luis Urias #2 of the Milwaukee Brewers gets a force out on Brandon Nimmo and throws unsuccessfully to first base in an attempt to get Starling Marte #6 during the fifth of a game at Citi Field on June 14, 2022, in New York City. (Photo

Bassitt (5-4), who entered with a 7.62 ERA in his last five starts, allowed just three singles and one walk with seven strikeouts. He got the Brewers to hit into double plays right after each of their hits, including in the sixth — when Milwaukee had runners at the corners before Willy Adames grounded into an inning-ending double play.

It was the third time Bassitt has thrown eight scoreless innings and the first since his lone shutout, a two-hitter for Oakland against the Los Angeles Angels on May 27, 2021.

Drew Smith worked a perfect ninth to complete the Mets’ 10th shutout of the season.

Milwaukee has dropped nine of 10, getting shut out four times during that span.

The Mets produced all the offense they’d need against Adrian Houser (3-7) in unusual fashion in the first. Brandon Nimmo led off with a double but stayed at second when Starling Marte beat out an infield single. Both runners moved up a base on Francisco Lindor’s groundout before Nimmo scored on Alonso’s single.

Jeff McNeil followed with a comebacker that glanced off the glove of Houser. Adames, the shortstop playing on the second base side in the shift, couldn’t adjust to the redirection and the ball skittered into right field as Marte scored. Alonso stayed at third as McNeil slid into second with a double.

The Mets extended the lead in the fifth, when Nimmo and Marte led off with singles before Nimmo scored on a one-out single by Alonso — his National League-leading 59th RBI.

Houser allowed four runs on eight hits and one walk with three strikeouts in 4 2/3 innings for the Brewers, who fell to 2-10 this month.