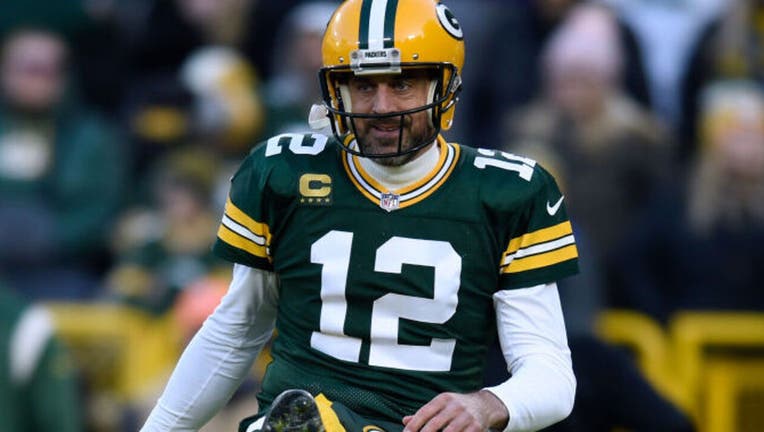 GREEN BAY, Wis. - Aaron Rodgers threw a touchdown pass and ran for a score, and the Green Bay Packers continued their improbable playoff push by shutting down Justin Jefferson and the Minnesota Vikings in a 41-17 blowout on Sunday.

Keisean Nixon scored on a 105-yard kickoff return and Darnell Savage had a 75-yard pick-6 of Kirk Cousins — one of four turnovers by the Vikings QB — to help Green Bay build a 27-3 halftime lead. Aaron Jones rushed for 111 yards on 14 carries and A.J. Dillon had a 2-yard touchdown run as the Packers won their fourth straight. 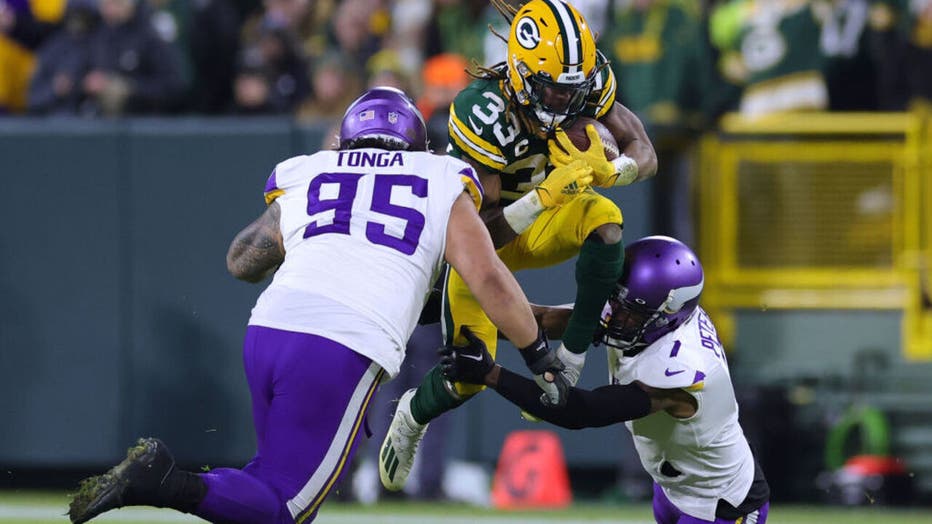 Aaron Jones #33 of the Green Bay Packers runs the ball against Patrick Peterson #7 and Khyiris Tonga #95 of the Minnesota Vikings during the second quarter at Lambeau Field on Jan. 1, 2023 in Green Bay, Wisconsin. (Photo by Stacy Revere/Getty Images)

Green Bay (8-8) will reach the playoffs if it beats division rival Detroit at home in its regular-season finale. A fourth straight postseason berth seemed out of the question after a 1-7 stretch dropped the Packers to 4-8, but they haven’t lost since and have benefited from favorable results around the league.

Green Bay's latest bit of good fortune came earlier Sunday when Washington fell 24-10 at home to the Cleveland, putting the Packers in control of their postseason fate. 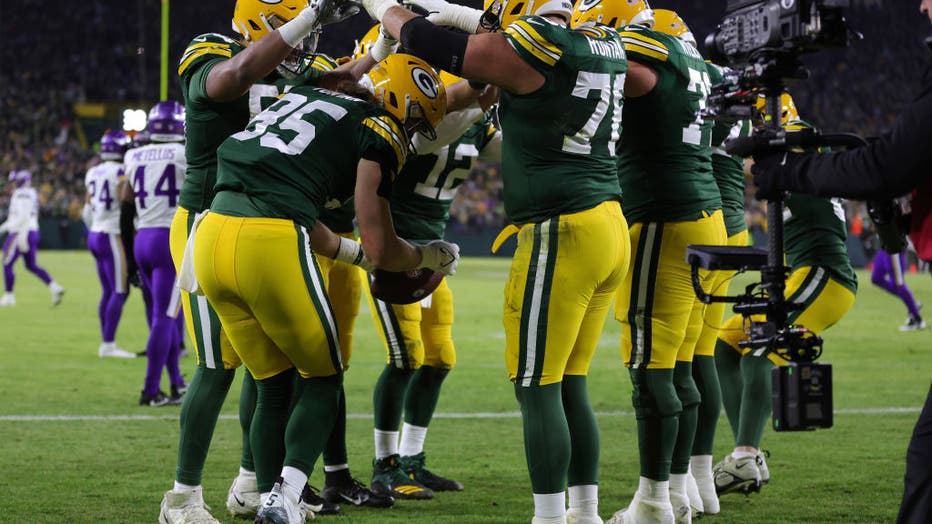 Robert Tonyan #85 of the Green Bay Packers celebrates with teammates after scoring a touchdown during the second quarter against the Minnesota Vikings at Lambeau Field on Jan. 1, 2023 in Green Bay, Wisconsin. (Photo by Stacy Revere/Getty Images)

The Packers then took care of business by making life miserable for Cousins and Jefferson, the NFL's leading receiver who was held to one catch for 15 yards. Jefferson had nine receptions for 184 yards and two touchdowns in a season-opening 23-7 victory over the Packers.

Savage, Adrian Amos and Rudy Ford each intercepted passes by Cousins, while Kenny Clark recovered a fumble on a strip sack. The Packers converted each of Cousins’ turnovers into touchdowns.

The Vikings' Dalvin Cook was held to 27 yards on nine carries. 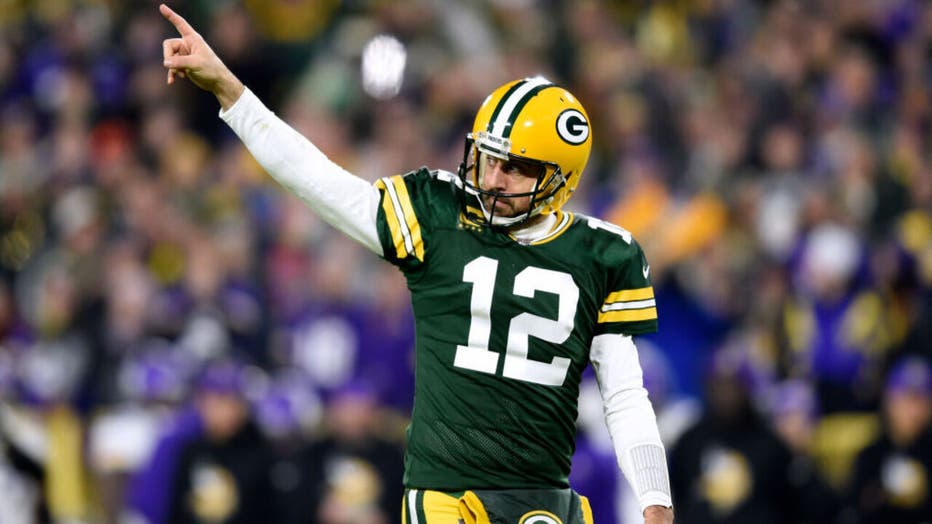 Aaron Rodgers #12 of the Green Bay Packers celebrates after touchdown during the fourth quarter against the Minnesota Vikings at Lambeau Field on Jan. 1, 2023 in Green Bay, Wisconsin. (Photo by Kayla Wolf/Getty Images)

After a blocked punt by Josh Metellus gave Minnesota first-and-goal at the 1 to help the Vikings take an early 3-0 lead, the Packers scored the next 41 points.

That outburst started with the big plays from Nixon and Savage. This marked the first time the Packers scored on an interception return and a kickoff return in the same game since a 31-23 victory over the St. Louis Cardinals on Oct. 30, 1967.

Nixon's touchdown was the Packers' first off a kickoff return since Randall Cobb’s franchise-record 108-yarder against New Orleans in 2011. Nixon had a 94-yard kickoff return in a 26-20 Christmas Day victory at Miami, but he left that game with a groin injury that kept him from practicing most of this week.

Green Bay also got a solid game from veteran kicker Mason Crosby, who went 2 of 2 on field-goal attempts, including a 56-yarder that the crossbar before bouncing through to close the first half.

As play began in Green Bay Sunday afternoon, the Packers' defense started with a 3 and out.

The Packers' offense went 3 and out to start themselves.

Green Bay's defense forced a Minnesota field goal with about 10:40 left in the first quarter. Greg Joseph kicked a 21-yarder to put the Vikings up 3-0.

The Packers answered with a touchdown…by Keisean Nixon, who returned the kickoff for the score. This, a week after a 94-yard kick return. This time, it was 105 yards.

The extra point was good, and the first kickoff return TD for the Packers since Week 1 in 2011 by Randall Cobb put Green Bay up 7-3.

A Darnell Savage pick-six put the Packers up 14-3 with just over 5 minutes remaining in the first quarter. Rasul Douglas batted the ball into Savage's hands on fourth down.

With about 1:30 left in the first, after the Packers' defense got the stop on third and 11, a 46-yard field goal attempt by the Vikings was no good, going wide right.

A 26-yard field goal by Packers' Mason Crosby was good, putting Green Bay up 17-3 with under 10 minutes remaining in the first half.

Soon after, Packers' TJ Slaton tipped the ball for an Adrian Amos interception.

A pass from Aaron Rodgers to Robert Tonyan added six for the Packers with under 3 minutes left in the first half. Mason Crosby's extra point was good, bringing the score to 24-3.

A 50-yard field goal attempt by Vikings' Greg Josephs was no good with under a minute remaining in the second quarter.

Mason Crosby's 56-yard field goal ended the first half, putting the Packers up 27-3.

As play got underway in the second half, Packers' Kenny Clark knocked the ball out of Kirk Cousins' hands, forcing the fumble and recovering it.

Vikings' Justin Jefferson made his first catch of the game in the third quarter. At the end of three, the Packers led 27-3.

A rushing touchdown by AJ Dillon extended Green Bay's lead to 34-3 early in the fourth quarter.

Soon after, Packers' Rudy Ford picked off Kirk Cousins, sending Green Bay's sideline into a frenzy. It was the Packers' fourth turnover of the night.

It was followed by a rushing touchdown by Aaron Rodgers for six. Rodgers became the fifth Green Bay player with a TD this game. Mason Crosby's extra point was good, bringing the score to 40-3 with under 10 minutes left in the game.

The Vikings scored their first touchdown of the game with under 8 minutes left to play courtesy Jalen Nailor. It was his first career TD. The extra point was good, bringing the score to 41-10.

Jordan Love entered the game at QB for Packers with around 7:30 in the game.

The Vikings added another touchdown courtesy KJ Osborn. Greg Joseph's extra point was good, bringing the score to 41-17, the final.