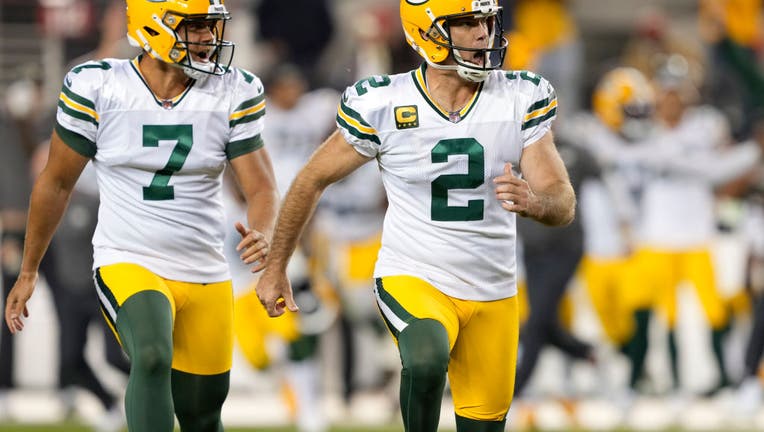 SANTA CLARA, CALIFORNIA - SEPTEMBER 26: Mason Crosby #2 of the Green Bay Packers celebrates after kicking the game-winning field goal against the San Francisco 49ers in the game at Levi's Stadium on September 26, 2021 in Santa Clara, California. (Pho

Rodgers delivered for the Packers (2-1) after Jimmy Garoppolo gave San Francisco the lead on a 12-yard TD pass to Kyle Juszczyk with 37 seconds to play.

Green Bay had no timeouts but Rodgers completed passes of 25 and 17 yards to Adams to set up the game-winning kick and a raucous celebration in the end zone. 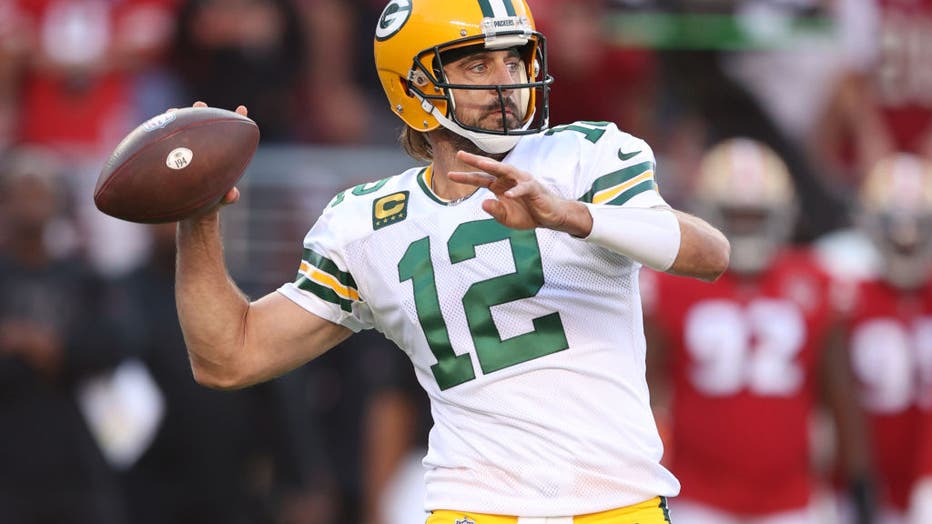 SANTA CLARA, CALIFORNIA - SEPTEMBER 26: Aaron Rodgers #12 of the Green Bay Packers drops back to pass during the first quarter against the San Francisco 49ers in the game at Levi's Stadium on September 26, 2021 in Santa Clara, California. (Photo by E

The comeback spoiled the first game for the 49ers (2-1) with fans since beating Green Bay in the 2019 NFC title game. San Francisco had rallied from 17 points down to take the lead before getting crushed by Rodgers.

Rodgers threw for 261 yards and two touchdowns to lead the Packers to back-to-back wins after a season-opening 38-3 loss to New Orleans. Rodgers had six TD passes and no interceptions in wins over San Francisco (2-1) and Detroit.

The Niners returned home following back-to-back road wins back East but struggled to slow down Rodgers. 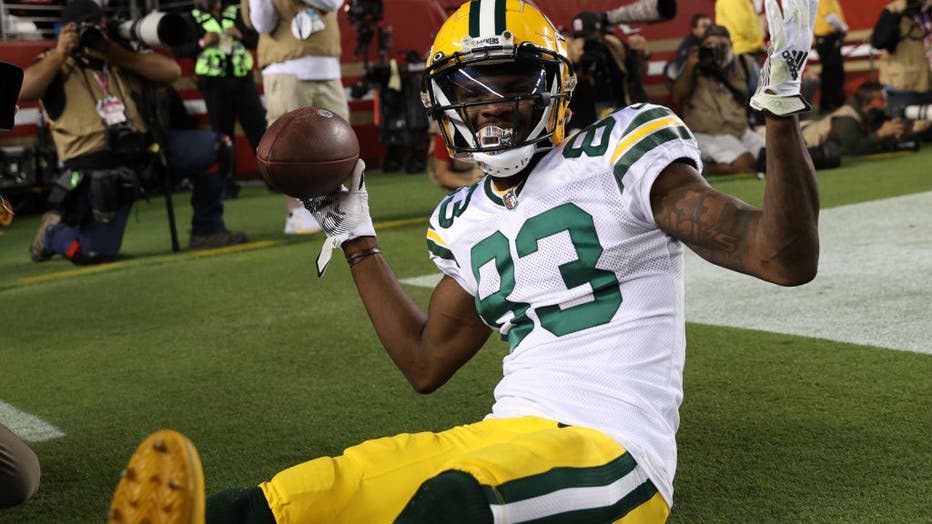 SANTA CLARA, CALIFORNIA - SEPTEMBER 26: Marquez Valdes-Scantling #83 of the Green Bay Packers celebrates after catching a touchdown pass during the second half against the San Francisco 49ers in the game at Levi's Stadium on September 26, 2021 in San

Rodgers connected on a 1-yard TD pass to Davante Adams and a 12-yarder in the fourth quarter to Marquez Valdes-Scantling as he exploited a banged-up 49ers secondary that lost two more players to injuries.

Starting cornerback Jason Verrett went down with a season-ending knee injury in the opener and K'Waun Williams (calf) and Josh Norman (chest) left this game in the first half with injuries.

The Packers were dealing with their own injury problems on the offensive line with their top linemen missing with Elgton Jenkins out with an ankle injury and David Bakhtiari on the physically unable to perform list with a knee injury.

Rodgers got rid of the ball quickly to neutralize Nick Bosa and the Niners pass rush and was only sacked once in the win.

As play got underway in California Sunday night, the Packers started with the football.

A Mason Crosby field goal from 54 yards capped off the Packers' drive, bringing the score to 3-0.

A pass from Aaron Rodgers to Davante Adams extended the Packers' lead to 10-0 with over 3 minutes left in the first quarter.

Neither team scored until the end of the second half, with about 1:30 remaining, when Aaron Jones ran the ball into the end zone for a Packers touchdown. The Packers further extended their lead to 17-0.

San Francisco scored just before halftime after QB Trey Lance entered the game. The 49ers' touchdown brought the score to 17-7 at the half.

The 49ers scored again to start the second half; the touchdown cutting the Packer's lead to 17-14 early in the third.

An Aaron Rodgers pass to Marquez Valdes-Scantling extended the Packers' lead to 24-14 early in the fourth quarter.

San Francisco soon answered with a TD, bringing the score to 24-21.

A Mason Crosby field goal with under 3 minutes left in the game put the Packers up 27-21 over San Francisco.

The 49ers took the lead at the end of the fourth quarter, San Francisco 28, Packers 27.

It all came down to a Mason Crosby field goal attempt from 51 yards – for the Packers win!