MILWAUKEE -- Ed Drexler lives by the mantra: "Love is the willingness to extend one's self for another's well-being." He has been doing that at Pius XI High School for a long time -- in a way that goes beyond the game. 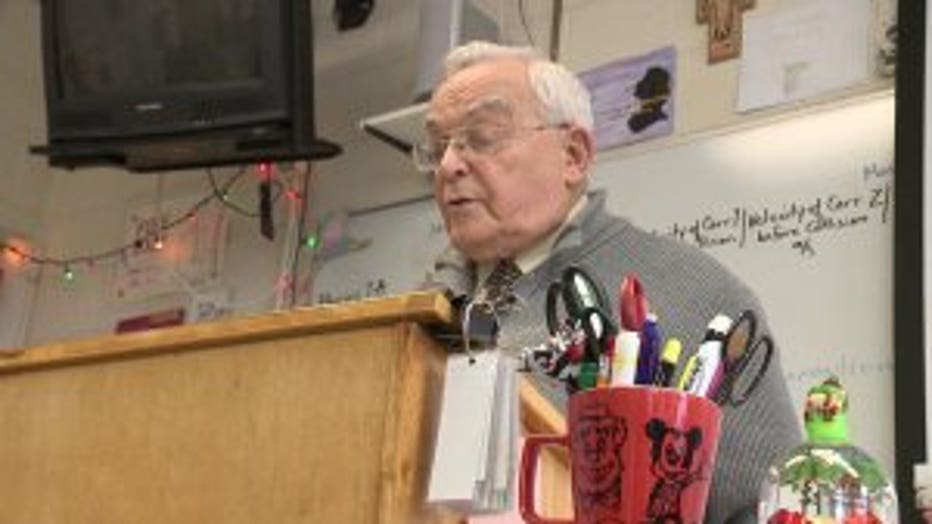 Drexler teaches genetics at Pius High School. He has helped author a book on biology. His expertise has taken him to places like Iceland, India and Jordan.

They're admirable accomplishments -- but what makes Mr. Drexler stand above the crowd is the fact that he's still teaching at the age of 90!

In a few weeks, he will finally retire -- sort of!

"No -- I'm not retiring. I might be retiring from teaching, but I'm still going to do other things that make the school go round," Drexler said.

Drexler has been doing that -- whether as principal, vice principal or teacher -- at Pius since 1950, a winning streak that has spanned almost 70 years. 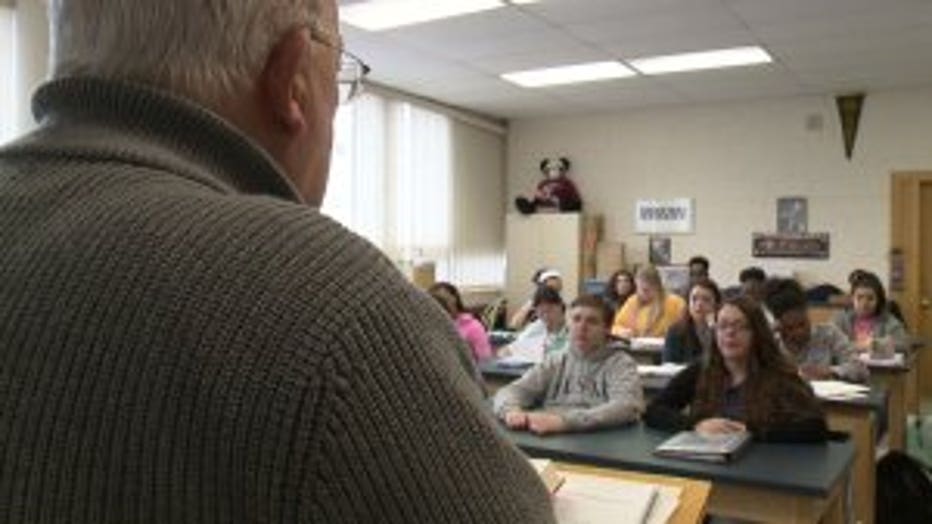 After serving in the Navy, Drexler went to the University of Wisconsin to become a doctor. The problem was, as Drexler puts it, he had "no idea" what was going on in organic chemistry.

In a real sense, Drexler never stopped going to school, which, back in the day was confusing to his daughter, who was just starting kindergarten at the time. 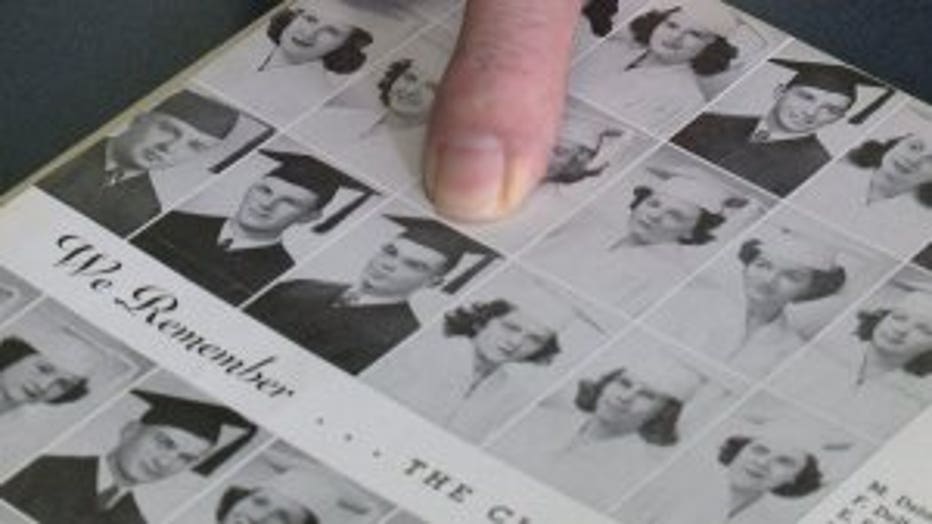 "After two days, she came home and said 'why don't you ever go to work?' And I said 'what do you mean by that?' And she said 'well, all the kids in my class talk about their dads going to work.' And I realized that I'd never said 'I'm going to work.' I've always gone to school. It hasn't been work. It's been very enjoyable," Drexler said.

Drexler himself was a student at Pius in 1942. His father sent young Ed there because he had a $50 scholarship. It was renewable with a B average.

"You know what happened? So I ended up cleaning the boys bathroom across the street for three years -- paying off the rest of my tuition," Drexler said.

With his great sense of humor, Drexler would admit that the Pius football team he played quarterback on was "in the toilet back then."

"The big event my junior year was probably the fact that we won a game. We beat St. Benedict the Moor. We played them on our homecoming, and we had one senior on the team because the rest had all gone off to the war. And we won. 6-0. It was the only win I had in two years of football," Drexler said.

During Drexler's senior year, the Pius/Marquette University High School game had to be postponed until the end of the season. The Hilltoppers needed a win for a share of the championship. After beating Pius 40-0 the year before, they wrote a polite letter asking the Popes if they would like to forfeit.

While he can joke about the football futility -- Drexler kept himself in shape. When he was nearing 50, Drexler rode from Milwaukee to Colorado on a bicycle.

Drexler says the best part was the finish, but he had fun along the way. Toward the end, he was about 60 miles from Boulder -- his final destination. 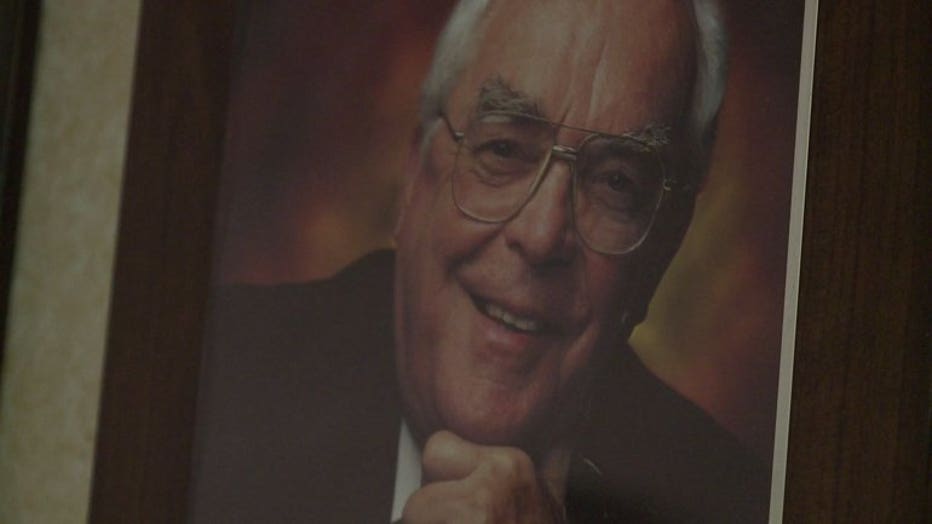 Even at 90, one would never think of Drexler as an old codger.

While his teaching career may be winding down, Drexler, like the Energizer bunny, plans to keep on going at Pius High School.

What will he do?

"Oh, whatever the principal doesn't want to do," Drexler said.

Whether running graduation -- which he has done since his second year, or being the school's archivist, Drexler has every Pius High School yearbook -- dating back to the 1930s. 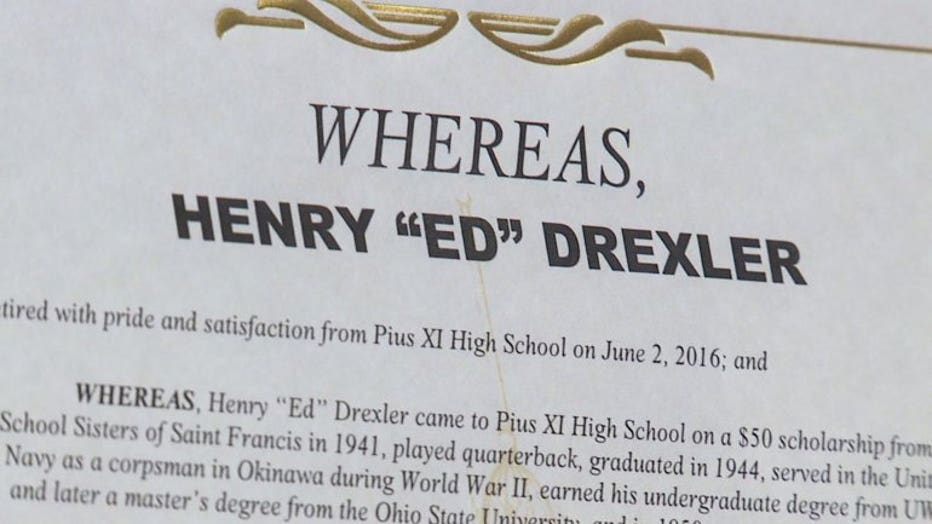 Drexler will continue his legacy of love for students, faculty members and everyone else who walks the halls.

"I'm in a retirement community now, and I would hate to have to stay there 24 hours a day," Drexler said.

Drexler is a World War II veteran who was able to go on an "Honor Flight" to the World War II memorial in Washington, D.C.