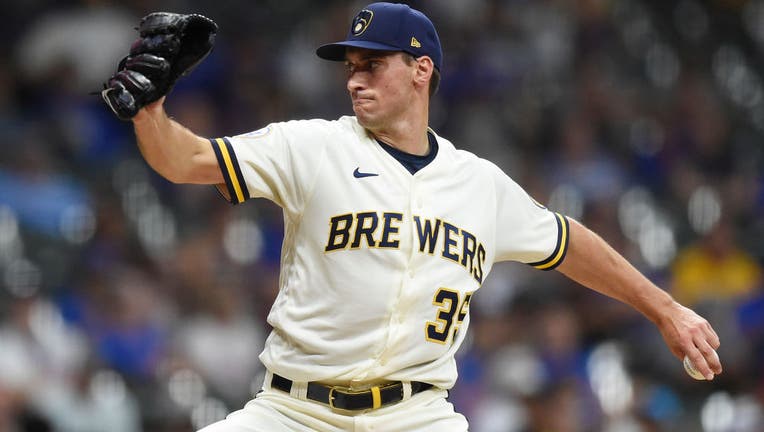 MILWAUKEE, WISCONSIN - JUNE 29: Brent Suter #35 of the Milwaukee Brewers pitches against the Chicago Cubs in the seventh inning at American Family Field on June 29, 2021 in Milwaukee, Wisconsin. (Photo by Patrick McDermott/Getty Images)

MILWAUKEE - Major League Baseball announced on Wednesday, Sept. 15 that Brent Suter was named the Brewers 2021 nominee for the Roberto Clemente Award. The award is one of baseball’s most prestigious individual honors acknowledging community and philanthropic commitment. This is Suter’s second time receiving the honor.

The Roberto Clemente Award is the annual recognition of a player from each MLB Club who best represents the game of baseball through extraordinary character, community involvement, philanthropy and positive contributions, both on and off the field.

Suter issued the following statement in a news release:

"I am so incredibly honored to be the Brewers’ nomination for the Roberto Clemente Award. Knowing what he meant to the game and to humanity, I am awestruck to be mentioned in the same breath as Roberto Clemente but I will always do my best to follow his example wherever and however I can. Thank you from the bottom of my heart to the Brewers organization, my teammates, my coaches, my family, my friends, the city of Milwaukee and to the Clemente family for this nomination."

As a Harvard graduate who studied environmental science, Suter uses his platform to draw attention to various environmental issues, the effects of climate change, the global crisis of plastic waste and emphasizes positive change. Known as the team’s resident environmentalist, he leads by example through his active and engaging philanthropic efforts, as well as in the clubhouse.

Suter has served as an active member and ambassador for ‘Players for the Planet’ since 2019, participating in cleanup projects around the world and making a series of appearances on behalf of Major League Baseball on Earth Day. He further supports multiple environmental groups such as Milwaukee Urban Ecology, the Outrider Foundation, ECO in the City of Milwaukee, and EcoAthletes.

During the 2021season, Brent launched a community-wide effort to plant 100 trees in the Milwaukee area for every Brewers win after the All-Star break. The effort allows community members to participate in planting and learning about the importance of urban tree canopy, which provides a plethora of health benefits for the community. Suter is particularly committed to using local trees to support food security by strategically planting fruit trees. In addition, this season, he has also volunteered for several nonprofits like Blessings in a Backpack and The Salvation Army to help fight hunger for kids in underserved communities.

Suter partnered with a bottle manufacturer in 2019 to produce reusable glass water bottles that he gifted to his teammates and other players across the league. He further co-created #StrikeOutWaste, an eco-friendly initiative to help his teammates and other players across the league to reduce plastic use inside ballparks and in their personal lives. He’s a founding member of Sidelining Carbon, an initiative from the American Conservation Coalition Campus that focuses on offsetting the carbon impact of professional sports team travel and serves as an ambassador for a first-of-its-kind recycling program with SC Johnson.

Additionally, Suter donated $10,000 to Brewers Community Foundation and during the pandemic, he partnered with other teammates to donate $10,000 towards the Ballpark Employee Emergency Relief Fund for stadium employees impacted by COVID-19. He recorded Stay-at-Home messages and the importance of wearing a mask in public to share on social media, supporting the statewide media campaign, #WeAreAllIn to help educate citizens about personal health and safety during COVID-19.

In addition to his notable contributions on and off the field, Suter leads in the clubhouse with a positive attitude and an unflappable sense of humor.

The league-wide winner of the Roberto Clemente Award will be selected via a blue-ribbon panel, including  Baseball Commissioner Robert D. Manfred, Jr., representatives from MLB-affiliated networks (MLB Network, FOX Sports, ESPN, and TBS), MLB.com, as well as Roberto’s children, Enrique, Luis, and Roberto Clemente, Jr. Beginning today, fans can vote for the Roberto Clemente Award via mlb.com/clemente21. The site will feature bios of each of the nominees and will allow fans to vote until the end of the season on Sunday, Oct. 3. The winner of the fan vote will count as one vote among those cast by the blue-ribbon panel.

To show his appreciation for Brewers fans, Christian Yelich has purchased 10,000 tickets to the four-game series against the St. Louis Cardinals

The Detroit Tigers took a 1-0 win over Milwaukee on Tuesday night and snapped the Brewers' five-game win streak.