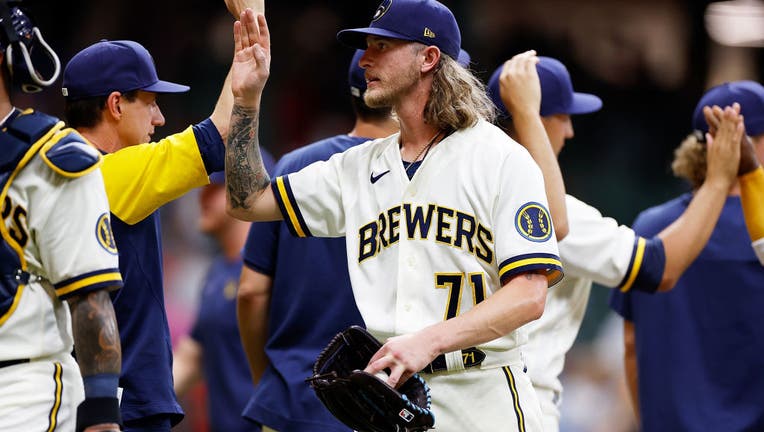 Josh Hader #71 of the Milwaukee Brewers walks off the field after beating the St. Louis Cardinals 2-0 at American Family Field on June 20, 2022, in Milwaukee, Wisconsin. (Photo by John Fisher/Getty Images)

The Brewers and Cardinals were tied for the division lead as they began this four-game series. The Brewers have followed up an eight-game skid by winning six of their last eight.

Burnes (5-4) struck out 10 and allowed just two hits and two walks. The reigning NL Cy Young Award winner’s performance was remarkably similar to his May 29 outing in an 8-0 victory at St. Louis.

In two starts against the Cardinals this season, Burnes has struck out 21 in 14 scoreless innings while allowing only four hits and three walks. The only two hits he allowed in this win came from Juan Yepez, who had a two-out double in the second inning and a two-out single in the seventh.

Devin Williams retired the side in order in the eighth and Josh Hader worked the ninth for his 20th save in 21 opportunities. Hader had been reinstated earlier in the day after being with his family last week while his wife gave birth to their son, Lucas Alexander Hader.

The Cardinals finished with three hits.

Brendan Donovan beat out an infield single to start the ninth but was thrown out attempting to reach second on a pitch that got away. Hader then retired Paul Goldschmidt and Nolan Arenado to end the game.

Burnes needed to be on top of his game to outduel St. Louis’ Miles Mikolas, who had come one strike away from a no-hitter last Tuesday before allowing a double to Cal Mitchell with two outs in the ninth inning of a 9-1 victory over the Pittsburgh Pirates.

The game was scoreless through 4 ½ innings with each team having only one hit before the Brewers broke through in the bottom of the fifth.

After Keston Hiura singled with one out, Taylor hit a 2-2 sinker from Mikolas over the center-field wall. Taylor’s seventh homer of the season traveled an estimated 416 feet.

Mikolas (5-5) lasted 6 1/3 innings and allowed just those two runs plus four hits. He struck out three and walked two.

But he didn't get any run support.

The Cardinals’ best chance came in the second inning when they had runners on first and second before Burnes ended the threat by striking out Harrison Bader. Andrew Knizner drew a leadoff walk in the sixth but was stranded at second.